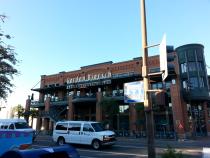 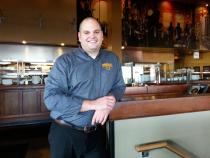 Downtown Tempe restaurants and bars are preparing for the weekend rush of people. The Arizona State University and University of Arizona rivalry game attracts locals and visitors to the area in droves, but this game has a championship home advantage on the line. For local businesses the game means a mad, mad, mad weekend.

Crowds are no stranger to the Tempe downtown business district. Mill Avenue is a few blocks from Sun Devil Stadium. Mill is home to more than 100 restaurants and stores. It attracts thousands of people for any given event, but this time, businesses are prepping for what they say may be one of the busiest weekends they have seen in a long time.

Kory Kilmer is general manager of Gordon Biersch Brewery Restaurant. He said with an important rivalry game and a possible Rose Bowl on the horizon, he has noticed more people coming to the district to eat and hang out.

“We’re actually having to borrow employees from some other stores to staff for that Saturday especially, and we’re just preparing people for, I mean I’m gonna have servers working upwards of 15 hours that day," Kilmer said. "Because it’s not just a matter of the people coming in for the game, it’s people leaving the game.”

Kilmer said he has been strategizing on how to accommodate the anticipated crowds. A PAC 12 Championship and several other events scheduled for the next couple of weeks are luring more customers.

“This game is gonna pretty much take up most of our space. If we win this game and we host that Pack 12  championship game, coupled with craft fair which is one of our top three busiest weekend the week after that, we’re not gonna have space," said Kilmer.

Across the street is Sparky’s Creamery, an ice cream shop that has been in the area for nearly 20 years. Gil Schmitt is the owner.

“We will order more ice cream mix, we will make more ice cream for that event. We will have more employees on duty to make sure we’re ready for the onslaught of customers," said Schmitt.

Schmitt said he is waiting until Friday to purchase the extra 20 cases of cream. That is because no matter how large the crowds get, weather is what really impacts his shop.

“We’ve had years where the temperatures are in the low 40s, let’s say, and we’re just selling hot chocolate,” added Schmitt.

If ASU beats U of A they will play Stanford in Tempe the following weekend, and that, business owners say, could mean even more customers. That will be the first time a PAC 12 Championship has ever been played here.