STEVE GOLDSTEIN: And now it's time for the next edition of Sonoran Arcana, our monthly series alongside Phoenix New Times food critic Chris Malloy as he seeks to probe the margins of Arizona cuisine and define it along the way. In his most recent column, Malloy follows along as the chef at Arizona's only [Forbes] Five Star, [AAA] Five Diamond restaurant in the state tackles a new dish using some surprising ingredients. Our co-host Lauren Gilder takes us there. 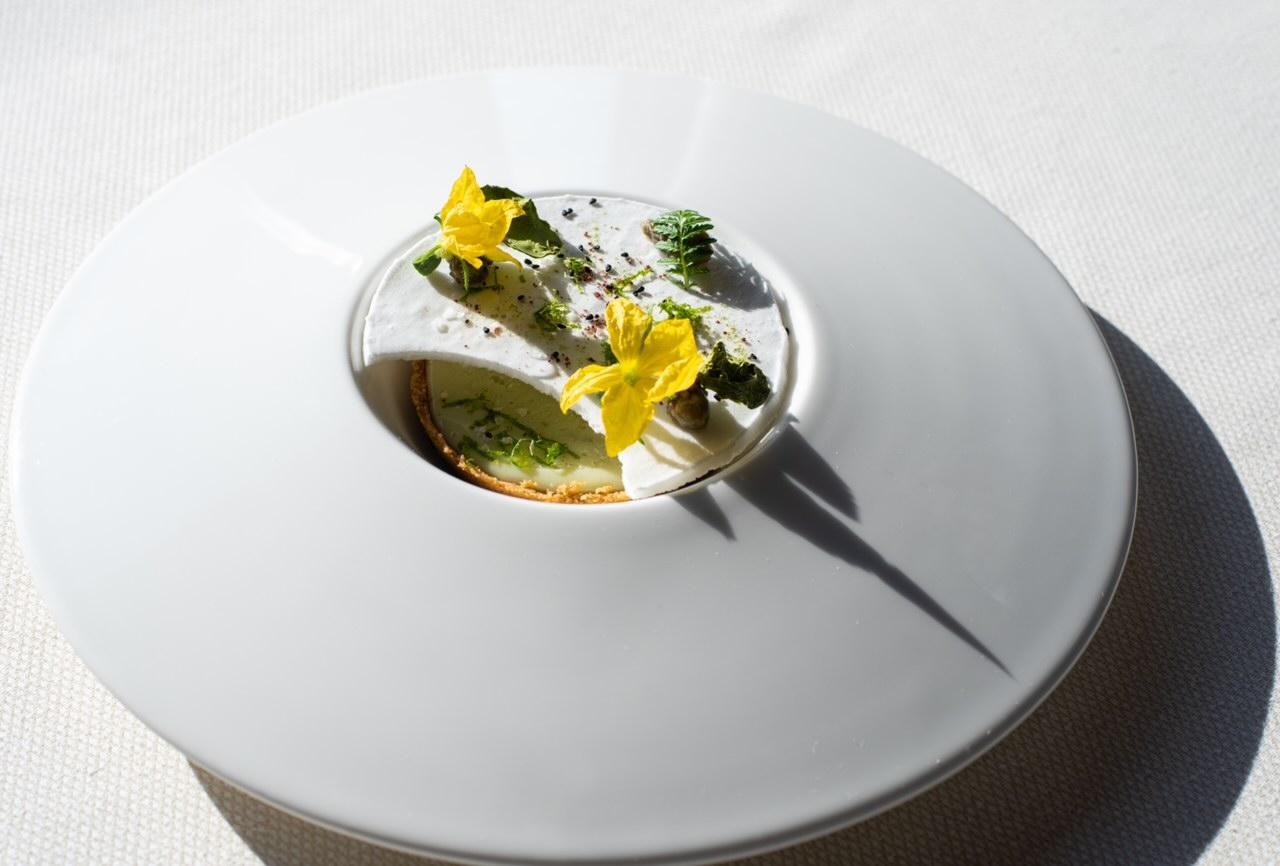 Kevin Lewis
A look inside the "key lime pie" at Kai.

LAUREN GILGER: All right, so this is the August edition of Sonoran Arcana. And Chris, who are we joined by today?

CHRIS MALLOY: So we are privileged to be joined by Ryan Swanson, the head chef over at Kai, a trailblazing restaurant that's been redefining Arizona cuisine since 2002. 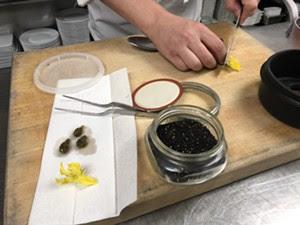 GILGER: Yeah. So tell us a little bit about the goal of this restaurant, Ryan.

RYAN SWANSON: Yeah, the ultimate goal of this restaurant is to kind of tell a story — tell a story of the past, of a community that's been around for thousands of years, you know? And so, by telling these stories with indigenous ingredients that we've been using, that they've been using in their community for for thousands of years. And I don't say that lightly. And when I say thousands of years, I mean before Lewis and Clark ever made their trip across the territories, these ingredients are already being shuffled and traded up and down the Pacific trade routes. So it's very, very fortunate for us to be using these ingredients and showcase them in a restaurant that showcases the community as well.

GILGER: So this is a restaurant owned by the Gila River Indian Community, right? Chris, give us a sense of the legacy of Kai and like the message that it's been sending for a long time now. 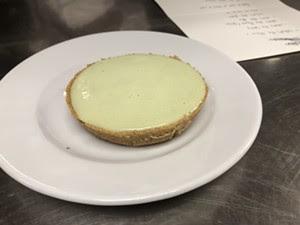 MALLOY: So Kai has been seen for a long time as one of the great restaurants in metro Phoenix. And when you have chefs like Ryan and his predecessors using ingredients like pickled cholla buds and barrel cactus seeds — you know, things that when we walk our dogs, we just kind of walk by, and we don't even realize that they're edible — and here they're depleting these beautiful dishes that are so artful and so delicious using these ingredients that we overlook. And it's been going on for almost two decades now.

GILGER: OK, so let's go to this new dish you're working on that Chris kind of got to watch you, in your process, create. And it's quite a process. So this is a twist on key lime pie.

SWANSON: Yeah. I kind of already worked out the groundwork of what this dish is going to look like and built it up in my head what it was going to be. Something ridiculous. I mean, it's not your everyday key lime pie. Actually, we did serve it the other night, and a lady came back, "That is not key lime pie, but that is the best pie I've ever tasted." So she says,"But don't call key lime pie." I'm like, "Yes, ma'am." 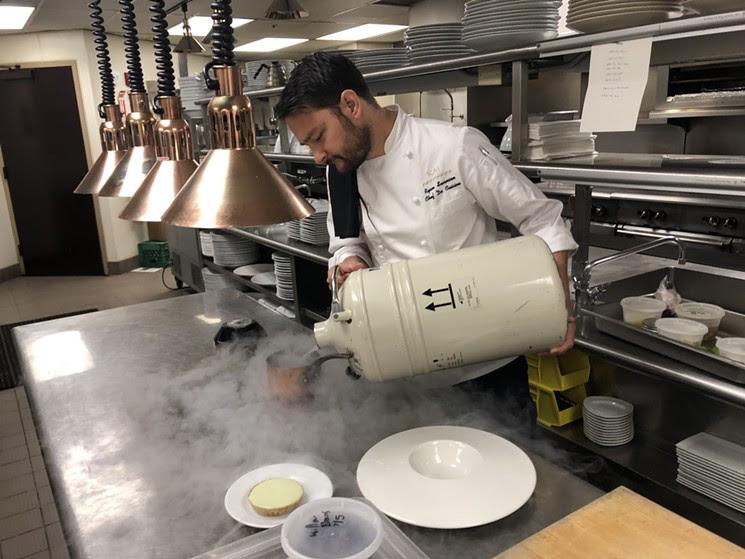 GILGER: So it's not lime pie because you've substituted the main ingredient here and put in a couple of different kinds of cactus, right?

SWANSON: Nopales, yes. So we actually juice nopales, cactus pads and made it into this kind of like cool green looking pie. And the graham crust, which is made from pinole wheat, pinole corn from Ramona Farms, and it just worked. It really worked. Just the ingredients just kind of made the dish work. I fancy myself a good cook, but these ingredients are — when they work, they work. And they're really good ingredients.

GILGER: Describe it for us, Chris. 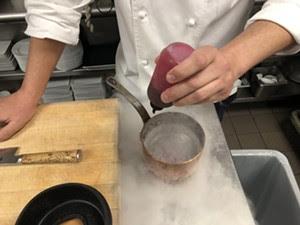 MALLOY: I think watching it come together for me was pretty amazing, because being a food critic, food reporter I spent a lot of time in kitchens watching people cook and talking to people about the processes and you see ingredient combinations that are common like, you know lamb and rosemary is common. But when I'm in Ryan's kitchen, he's like, "Oh yeah, cucumber and cactus and this other ingredient, like they're made for each other." You know I'm just like, "OK. That's pretty cool. I've never heard that one." So there's that, but then there's layers of that. I mean, all of these ingredients that come together — like Ryan grinds the sumac in a mesquite mortar and pestle with desert willow and kind of sieves that dust on top. You know, you've got three different kinds of cactus in here at least. You have a crust made from indigenous wheat that tastes so earthy and robust and just has this vitality that pie crust never has. And there's just all these kinds of familiar but different flavors just jigsaw together so beautifully. It was really amazing to see it come together, and it kind of came together in a whirlwind with Ryan just using liquid nitrogen and tweezers and sieves and cucumber flowers. It was it was like a blur of of culinary excellence. It was it was really incredible.

GILGER: So there's always a question I ask in these interviews about what this is contributing to Chris's thesis here. Right? You're trying to define Arizona food and give a voice to some kinds of trends or ingredients or stories that are coming out of cuisine in the Valley that we're not talking about enough. So how does this one contribute to that idea? 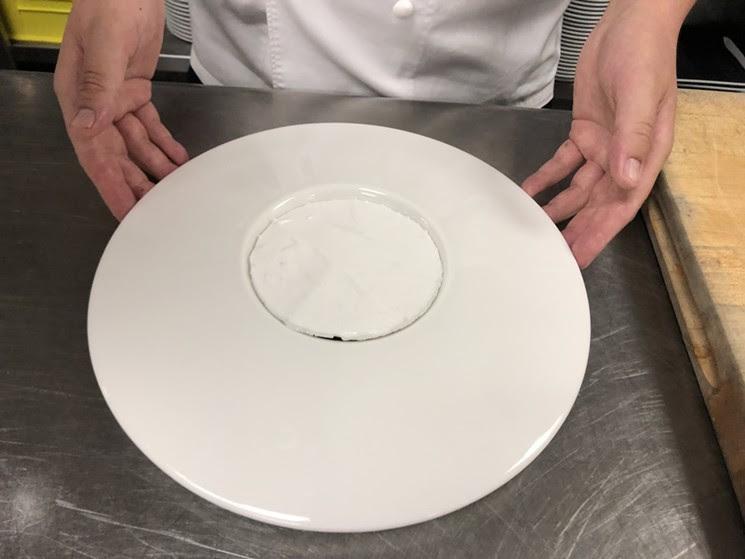 MALLOY: So I think some of the past columns have focused on ingredients or people who are more defining Arizona cuisine on the margins. I would say that Ryan and Kai are one of the leading voices in defining Arizona cuisine. And they have been for a long time, and they are using a good percentage of the Sonoran Desert's edible ingredients. They're using them in ways that are not fully traditional but honor tradition and push tradition in some exciting new directions. I think that even 18, 19 years in, they're still on the leading edge of Arizona cuisine and of making plates like this key lime pie that looks nothing like a key lime pie. I mean, you look down on this thing — and I say in the article that it looks like a garden in snow because there's a white meringue and then there's some flowers and some gnarly little cactus buds and some interesting things on top — and you get it and you're like, "What is this thing?" But you dig in. You take you taste the flavors of the desert. I mean, it was so bright and vegetal in a way that was light and interesting with the sweetness. You really do get something of the land when you eat at Kai and you taste a dish like this. And to me, ultimately, the best experiences I have with Arizona cuisine are when you can kind of get that sensation of the land. It's not even a flavor. You just feel that kind of vibe of the desert as you eat through something.

SWANSON: What me and Chris were actually talking about is just state recognition. This is a very unique state, and I've lived here for my entire life, but I've never really seen a state quite like this just kind of spans through all different types of terrains and grows different types of vegetation ingredients. It's a unique state. And the the community that we represent, they're very unique, very proud and just a very cool community to be a part of. So we're actually kind of figuring out what sticks, what works, like what we were doing in this desert. Baking, taking classic techniques but using ingredients that have never really been used in this kind of format and showing that these ingredients work as well, and they're very rare. And so I think that's what Arizona is all about, and that's what myself and Chris — I think that's what we're trying to do. We're trying to be spokesman for the state and just try to get the word out. Because the state, what we've got going on right now is just very unique, and it's very exciting to be a part of.

GILGER: That is Ryan Swanson, head chef Kai restaurant Wild Horse Pass Resort and Chris Malloy, Phoenix New Times food critic. Thank you so much for coming in, both of you.

SWANSON: Thank you very much. 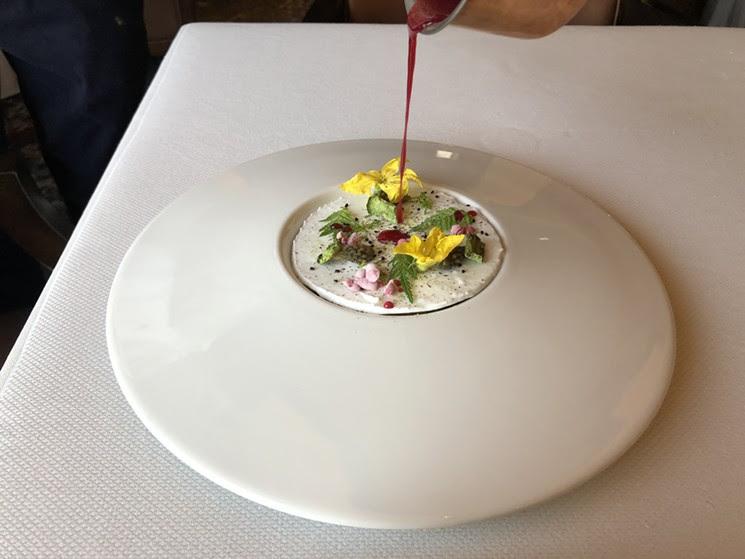