Arizona Chamber Of Commerce Weighs In On Trade War 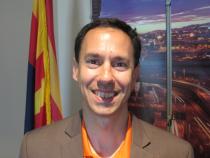 The trade war between the U.S. and China continued to negatively affect the markets Friday as the Dow closed down over 600 points. One Arizona business expert weighs in.

As a result of the ongoing friction between the U.S. and China, farmers haven’t been able to sell their crops.

Tariffs on Chinese steel have slowed down construction and development projects.

"Wall Street hates this constant tit for tat between the US and China," he said. "It’s very clear that when there’s pessimism in terms of a deal with China, the markets go down. When there’s some level of optimism, markets go up."

Hamer said while he remains optimistic cooler heads will prevail, he warns that continuing down this path could lead to a serious recession.

"I still am optimistic ... that both parties will reach at least a ceasefire so that we don't go down a road that will put the world into a recession," he said.

An important Valley business group says it won’t support the state GOP without a change in rhetoric and leadership.