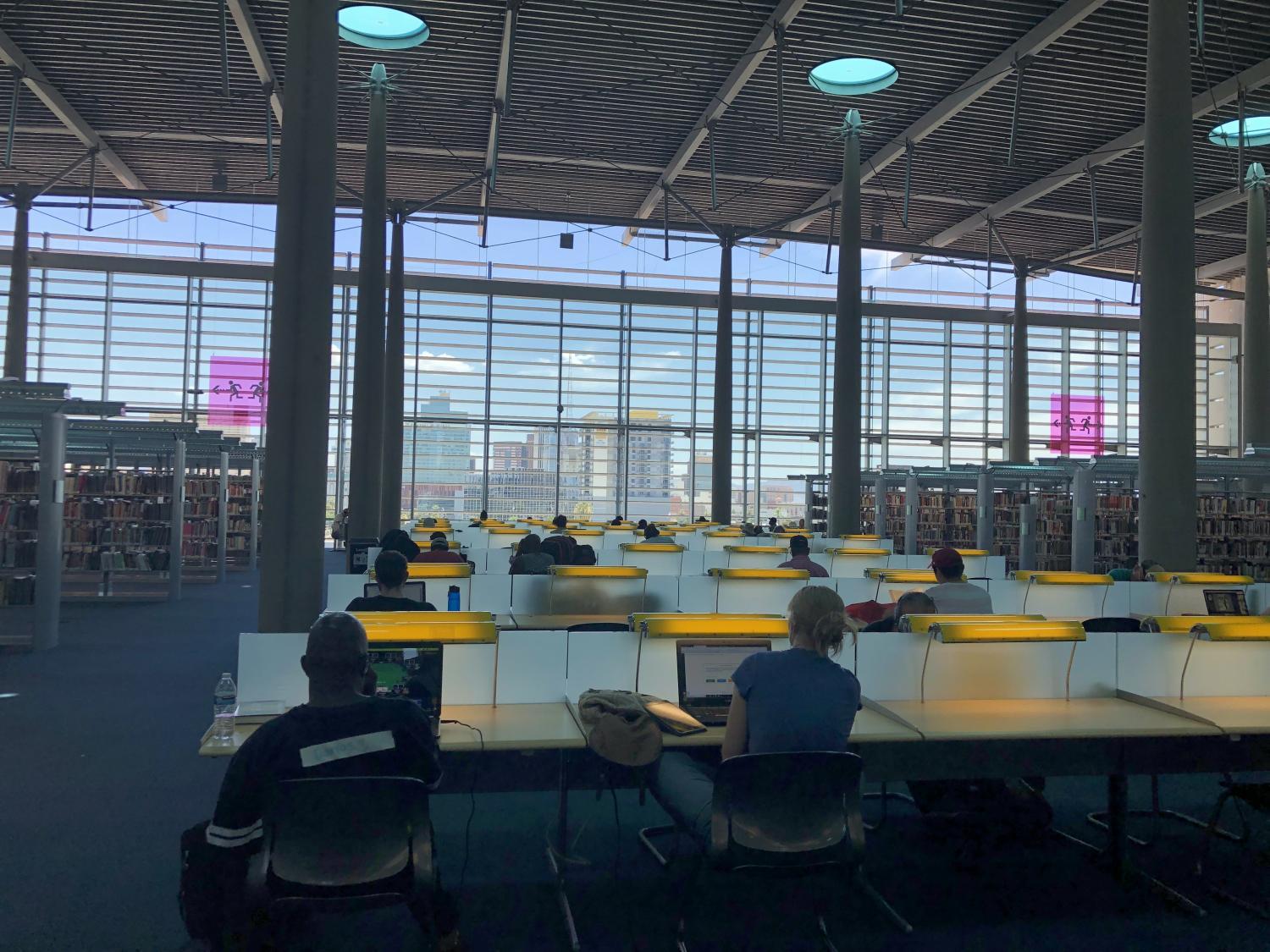 Outside the Burton Barr Central Library on a July afternoon in downtown Phoenix, Yahshua McDuffie offers free water and soda from his ice chest. It’s 112 degrees, and the sun is beating down on the blacktop in the library parking lot.

“It’s so hot,” McDuffie said. “A lot of people out here suffer from heat stroke. I’m trying to prevent that, do my part.”

McDuffie is one of the scores of individuals, groups and organizations throughout the community that have come together to offer some sort of heat relief — usually through air-conditioned cooling stations and hydration centers. But heat deaths still continue to rise.

So far this year as of Aug. 24, Maricopa County has confirmed 32 heat-related deaths and is investigating 134 more.

For the thousands of people experiencing homelessness in downtown Phoenix, the Burton Barr Central Library is the best climate-controlled environment they have access to. 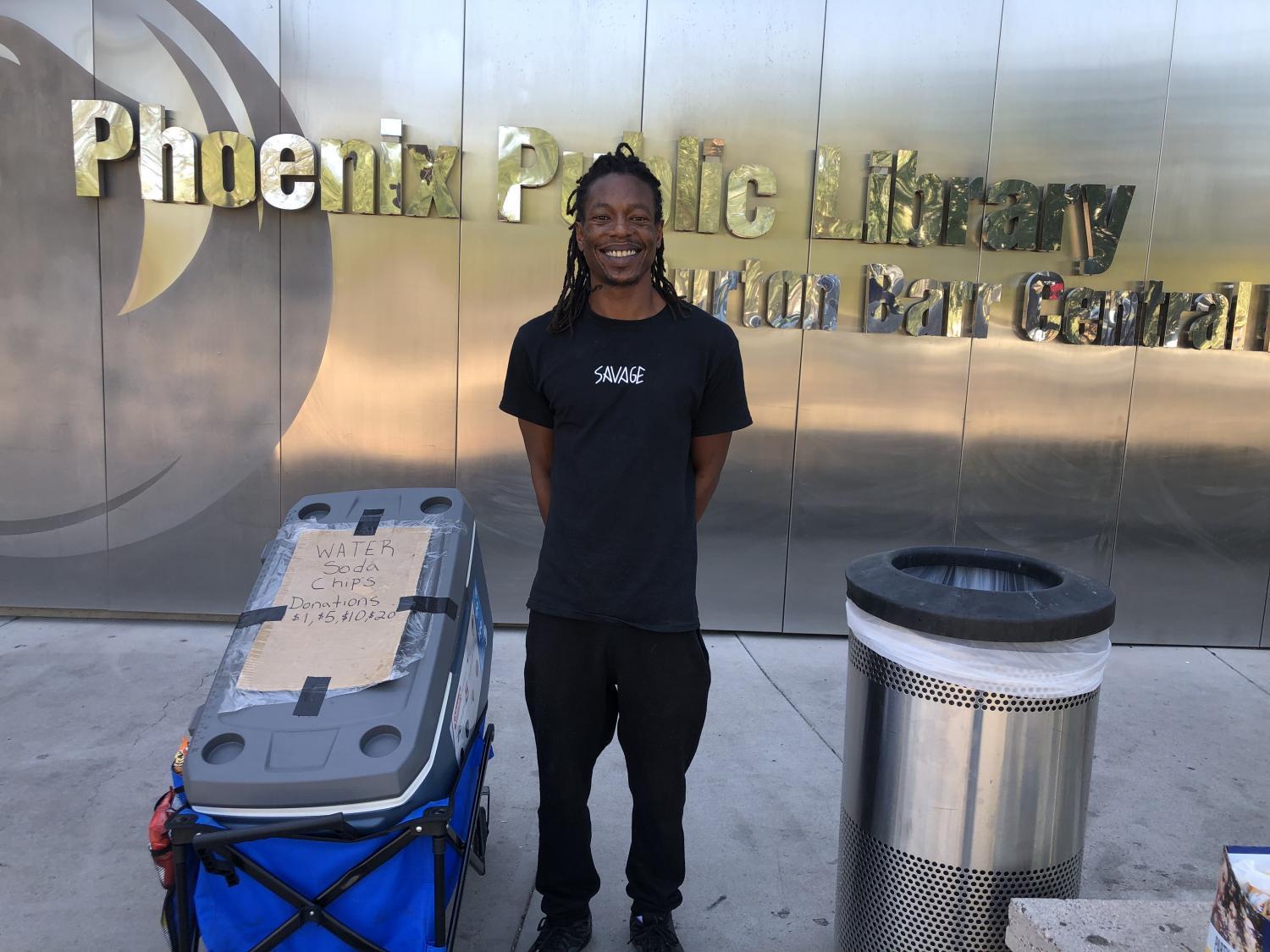 Just stepping through the doors, patrons are hit with a wave of chilled air and the cooling sound of the large water feature. Immediately inside the lobby, they meet security guard Chester Jones. Rather than chase the homeless away, his team helps them.

“We do wellness checks, you know, ‘How you doin’? Are you OK?’” Jones said. “If they really have some issues, we’ll get little bags of ice to give them.”

During the hottest parts of the year, Jones said the library has regular visitors he comes to know and befriend. One of those is Jimmie Bigthumb, a retiree who spends his days in the library to save on electric bills.

→ See A Map Of Heat Shelters In The Phoenix Area

“It’s too hot for me at home,” Bigthumb said. “I live in a trailer, so I come here most of the day to save on my electric bill.”

He saves about $150 each month just by using the library. He and hundreds of other patrons charge up their phones, read the newspaper, use the internet and enjoy the quiet environment.

That is, until 5 or 6 p.m., when the library — and most other designated heat refuge centers — close for the night.

Most of these cooling stations are local businesses, churches, charitable organizations and community centers that are available during business hours.

Operating into the evening adds complications most businesses and organizations aren’t prepared to deal with.

“What’s tricky with the cooling stations, once you get into being open into those late evening hours, they then become classified as homeless shelters,” said Dr. Rebecca Sunenshine, the Disease Control director for the Maricopa County Department of Public Health. “Homeless shelters take an entirely different level of resources to operate.”

In a 2017 study published in the journal Weather, Climate, and Society, researchers found that a majority of Maricopa County cooling centers needed at least one additional staff member to operate effectively. Extra staffing on top of higher utility bills, water bottles and other services add up to a lot of money.

Summer days are longer, extending the amount of time people are exposed to the most dangerous heat. And even after the sun goes down, the temperatures can still be hazardous.

“In an urban environment, we tend to think noon will be the hottest part of the day,” said Liza Kurtz, a Ph.D. candidate studying community response to extreme heat at Arizona State University. “The hotter parts of the day tend to be 4 to 5 (p.m.), and even 5 to 7 (p.m.) can still be extremely extremely hot.”

“If you’re homeless, you might be exposed to temperatures still well over 90 or 95 during the nighttime,” Kurtz said. “Your body never gets a period of respite or time to cool itself. And that can be very dangerous, particularly with people who already have existing conditions.”

So dangerous, in fact, that Sunenshine said not having access to air-conditioning could be an emergency.

“When it’s over 90 degrees, a fan is not enough,” she said. “If individuals don't have AC functioning at home or they’re unable to pay their electric bill, it is important they actually go to a homeless shelter so they can sleep in a cooled environment.” 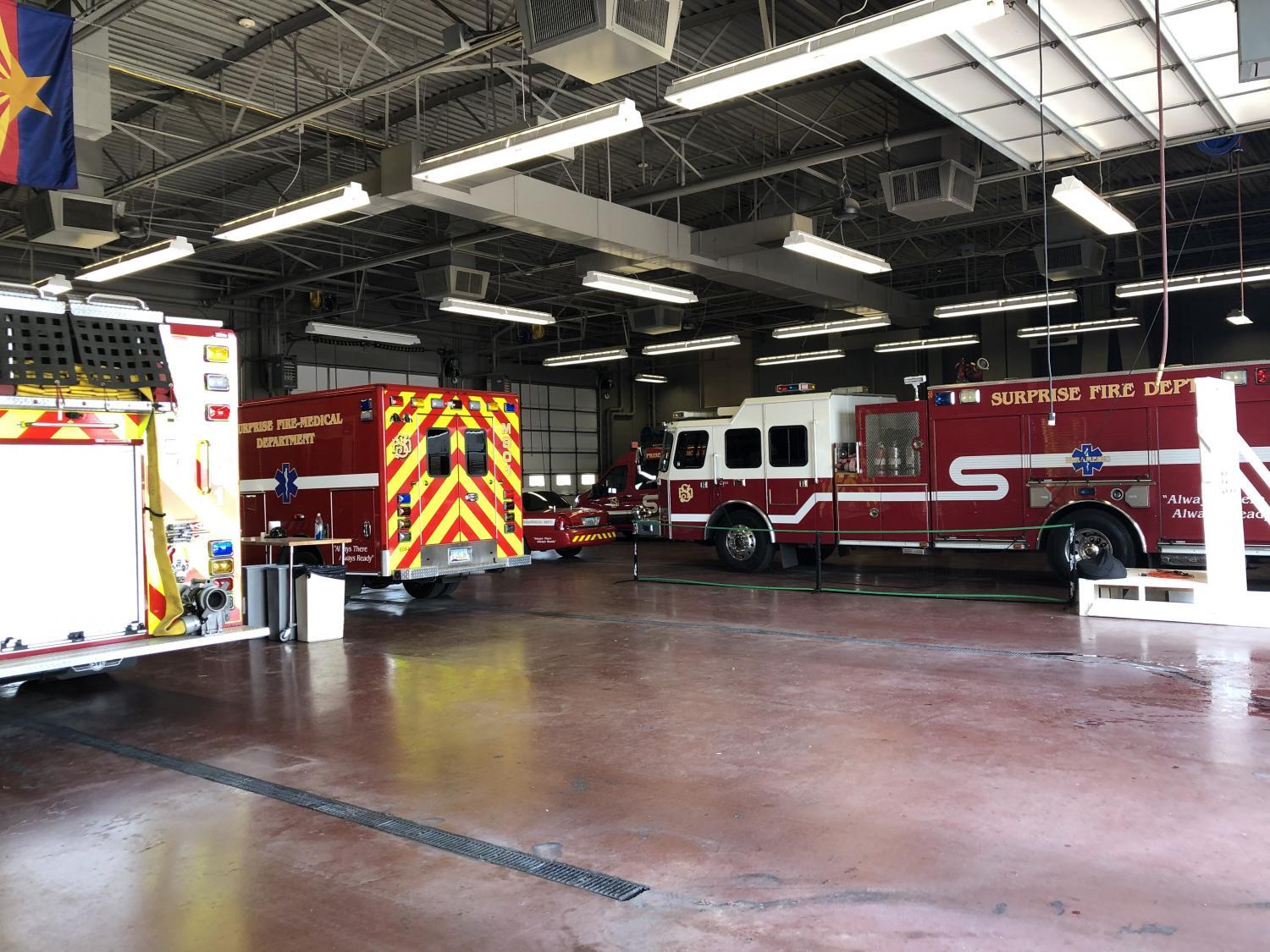 Scott Bourque/KJZZ
Fire Station 301 in Surprise is the only 24/7 heat shelter in Maricopa County.

Fire stations have been proposed as emergency heat shelters. They’re strategically located and staffed 24 hours a day, seven days a week, by trained emergency medical professionals. But only one firehouse in Maricopa County — Fire Station 301 in Surprise — is designated as a 24/7 heat shelter.

Several times during his 48-hour shifts, Captain Ryan Flinn loads a 10-gallon trash bin with ice and bottled water. Then, using a long bicycle cable lock, he secures the bin to a column. The water and shade will be there all night, even when his crew is out on a call.

“Some of the people in need may not have shelter and the ability to find water,” Flinn said. “It’s not just when the sun’s out during the day, beating down on people. It’s all hours of the day. If they need a drink at 3 o’clock in the morning, it’s available for them.”

There used to be signs and banners on the firehouse advertising the refuge center. The signs, along with several other trash bins and hundreds of bottles of water, have all been stolen — often within hours of being set out.

Firefighters and paramedics at the station have spent their own money to buy the trash bins and water bottles. They’re at a loss for what to do. On one hand, Battalion Chief Julie Moore said the program is important and in line with the department’s mission. On the other hand, operating a fire department isn’t cheap, and budgets are tight.

“If this is one small step we can do with the support of the community and their donations to provide for the less fortunate in the community so they can stay safe through these hot summer months, it’s a great thing to do,” Flinn said.

Other fire departments in the Valley don’t open their stations like this. Mesa Fire & Medical Department partners with the city’s parks and recreation department to provide heat relief services. Representatives from Phoenix Fire and Tempe Fire did not return requests for comment.

“If I were going to wave a magic wand and prevent all heat-related deaths, I would make sure there were places to sleep ... where people could go to cool off from the heat so that they weren't in a situation where they could get heat exhaustion,” she said.