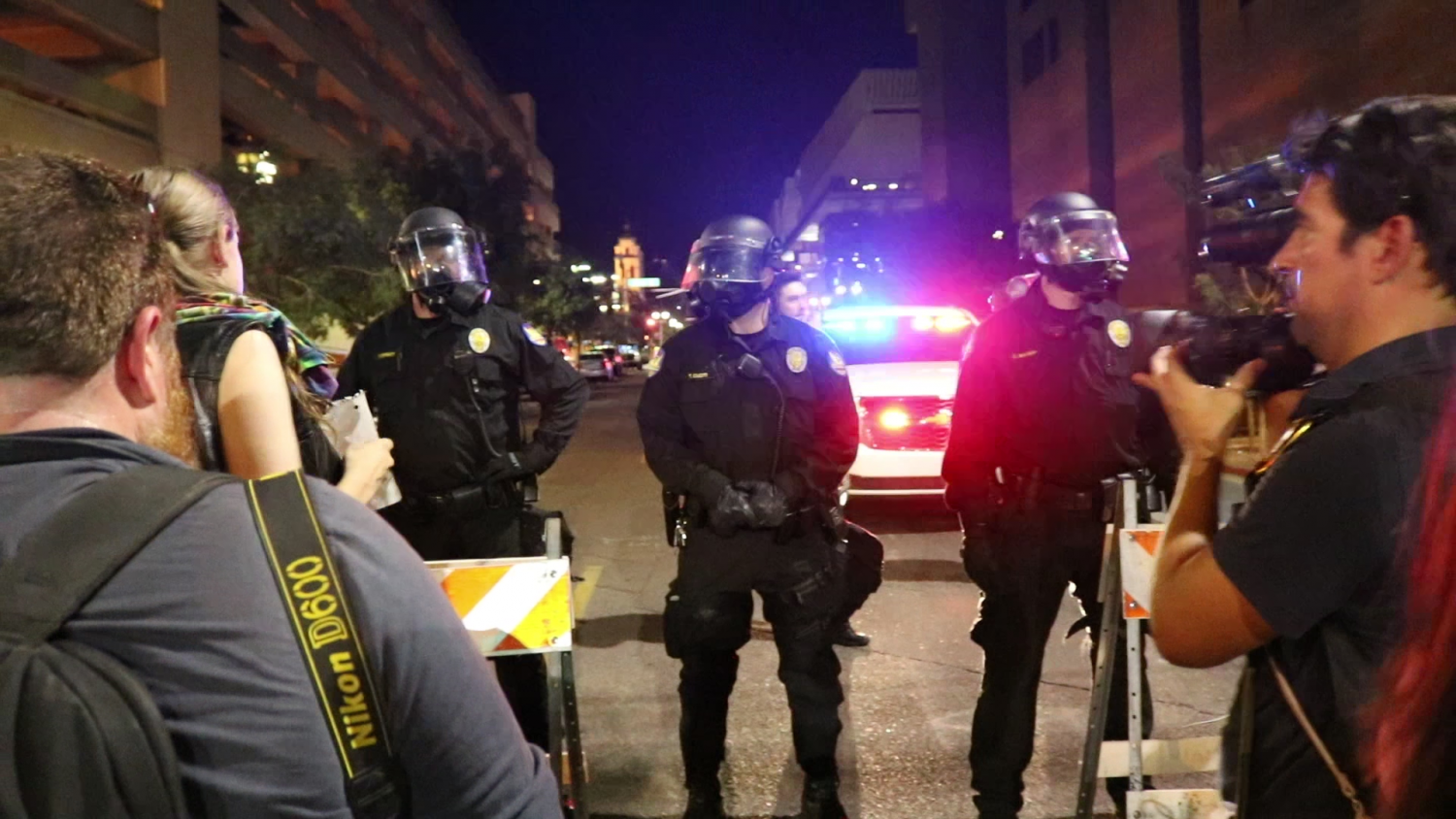 Jackie Hai/KJZZ
Phoenix police push crowds of protesters away from the convention center following the end of Trump's rally.

STEVE GOLDSTEIN: Two years ago today President Trump held a rally in Phoenix that saw some clashes between police and protesters. ASU criminologist Ed Maguire was observing with three PHC students when he found himself more directly involved than he'd expected.

GOLDSTEIN: Maguire had already been studying how police respond to protests and he'll soon have a book published on guidelines for improving law enforcement approaches to those events. I asked him what surprised him about what police did that night in 2017.

MAGUIRE: The police began firing these munitions at the crowd without having provided the crowd a warning to disperse. This is just a fundamental element of crowd policing is that if you are going to begin firing munitions or chemical agents into a crowd you give them an opportunity to disperse first. That didn't happen.

GOLDSTEIN: How difficult can those situations be even with the proper training?

MAGUIRE: I mean we need to acknowledge that these are really difficult situations for police, not only for police administrators who need to make a call about how to handle these events, but especially for the frontline officers who are quite frankly often taking a lot of abuse, verbal abuse, people taunting them, people trying to engage them potentially to achieve a YouTube moment or, you know, become a social media star. These kinds of things. These are very real dynamics in a lot of these incidents and police do need to train to prepare for the intense difficulty of these moments and places with a lot of stress, physical and emotional stress, on the officers who have to handle these events. That being said, it is possible to prepare appropriately for these events. We know that going in, a properly trained police department will be ready to handle the physical and emotional strains that come, and the logistical strains, that come with dealing with these types of events.

GOLDSTEIN: I presume most people there are there to legitimately protest. We know there are always some people who, you mentioned YouTube moments, but even more than them people who are of a certain mindset maybe they actually want to engage with police for other reasons than just being a social media star. What are the challenges that are inherent with that?

MAGUIRE: So this is exactly the most difficult part of handling these events and so what we recommend, and we have a book coming out for police on how to handle these events, that really goes into a lot of detail about how to do this, but the short version is you are reinforcing, for the peaceful protesters, that you are going to respect their First Amendment rights to engage in peaceful protest while simultaneously dealing with those people who are breaking the law and we recommend the use of extraction teams. These are heavily armored folks who enter the crowd and extract the people who are causing those kinds of issues while simultaneously informing the remainder of the crowd, "you're free to continue protesting peacefully." 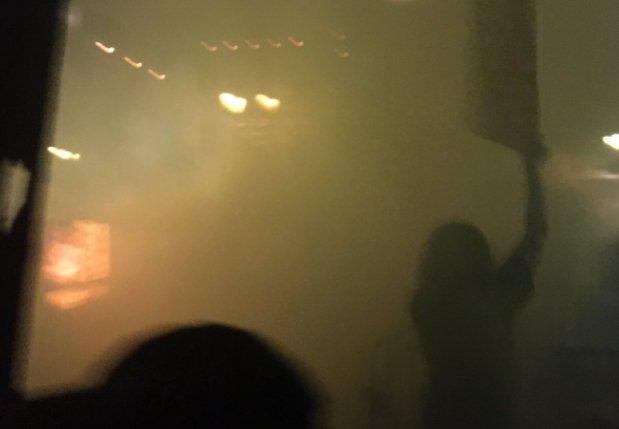 MAGUIRE: Yes. So we go into a lot of detail in our guidebook about all of the various facets of communication but they're absolutely essential and they occur before an event begins. And so it involves police meeting with protest leaders and talking about, you know, here are the kinds of behaviors we'll tolerate, here the kinds of behaviors we won't tolerate. Here are the places you can go, the places you cannot go, basically. And sort of working with protesters to help them understand exactly what will happen and what will not happen. And part of the reason this is important is because you end up with the peaceful protesters on the side of the police. So we're doing some writing now about what occurred in Phoenix and there's a principle that we use called the transfer of grievance. And this isn't something we created, this came out of some protests that occurred in London, and the transfer of grievances essentially have people in the crowd who, in this case, who are angry at Donald Trump and his administration, and by the end of that event they're not even really thinking about Donald Trump and his administration. They're angry with the Phoenix Police and we call this a transfer of grievance. The key in communicating with protesters is to make sure that whatever they're angry about isn't you. Right? And so you want to keep them focused what their grievance on whatever they're protesting about, and make them happy with how you did. And that's the key to all of the communication before, during and even after these events.

GOLDSTEIN: How should police be communicating with the general public that won't be at the protests but may watch it on TV for example?

MAGUIRE: Well one of the big things they need to do is communicate about things like road closures and traffic disruptions. I mean, protests frequently end up causing logistical chaos for a city, right? And so there is a police chief who runs the Southeast Pennsylvania Transit Authority Police in Philadelphia, and he does an amazing job. He infuses humor into it and patriotism and all of these kinds of really interesting dynamics. But he sends out tweet storms during protests where he's mixing in jokes. But also, you know, "avoid Fourth Street between, you know, A and B because there's going to be a lot of traffic there and, you know, you'll be late getting home" and these kinds of things. And so I do think that communicating with the community about what kinds of disruptions they can expect is actually a really important part of handling these events well.

GOLDSTEIN: How much do police dread the possibility of protests knowing that, even if they do their jobs incredibly well, there could still be some backlash?

MAGUIRE: Police officers dread these events. They're awful events to work because of the handful of people who end up causing trouble and how to deal with those people, the physical and emotional strains that those frontline officers face are very real. And in some cases that means having the ability, among officers, to spot that the officer standing next to you looks like he or she is about to lose their cool. And so let's have a procedure in place for letting that person have a break, because if that person loses their cool could change the entire dynamic of the event. It's really important.

GOLDSTEIN: Ed Maguire of ASU School of Criminology and Criminal Justice, thanks for joining us today.