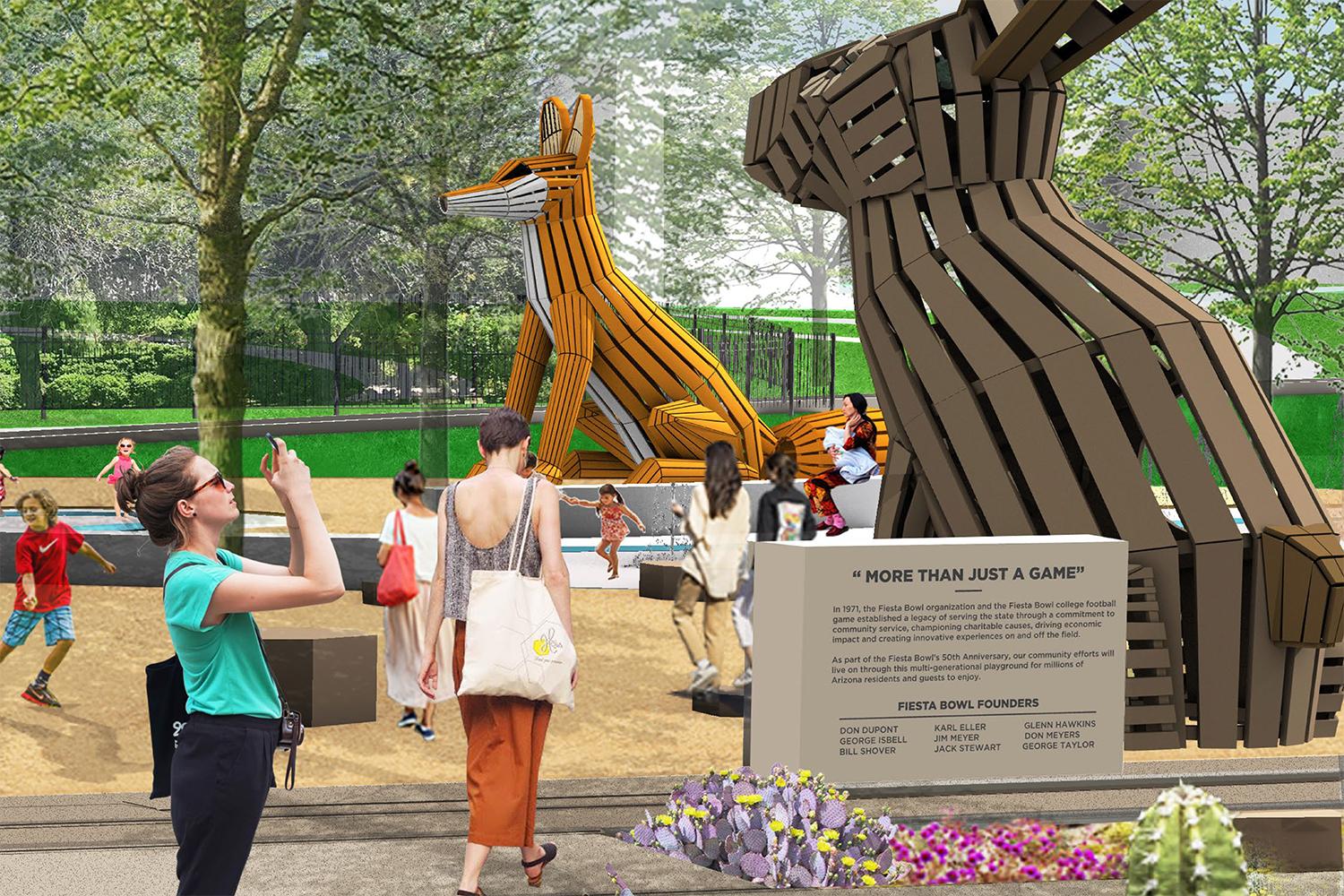 LAUREN GILGER: Downtown Phoenix's Margaret T. Hance Park is about to get a mega facelift. The nonprofit Fiesta Bowl has given the park $2 million to build what has been dubbed a "mega playground" with 20,000 square feet of play space expected to include features like a splash pad and rock climbing slope. Improvements to the park have been in the works for years and this donation marks the first major contribution to the effort. Jessica Boehm with the Arizona Republic was at the groundbreaking on Monday and she's in studio now to tell us more about this. Good morning Jessica.

GILGER: So first of all my son will be really happy about this, but what exactly will this mega playground look like? $2 million is a lot of money.

BOEHM: It is a lot of money and 20,000 square feet is a lot of square feet. This is going to be a substantial chunk of the park. And it is expected, like you said, to include a lot of the features that people have been asking for a long time, specifically the splash pad. I know, as they've been going through this process of trying to figure out what people like, that has been like top of priority.

GILGER: I can tell you I know with the toddler. But okay, so like we said this is the first big financial contribution to this effort to revitalize Hance Park. But this is an effort that's been going on and been talked about for a long time in downtown Phoenix. What took so long?

BOEHM: Truly this probably has been the revitalization efforts, which have been in the works for almost a decade. And you know I've been asking that question myself, why has this continued to take so long? And I think part of it is that they were waiting for this like first big donor to hopefully kick off a campaign. So you know $2 million, that's super great, but the larger plan that they're hoping to accomplish is somewhere between $80 and $100 million. So kind of a baby step at this point we're taking. So I think that the hope is that you get the first major big name donor out there showing that they're going to invest in this and hopefully others will follow behind them. 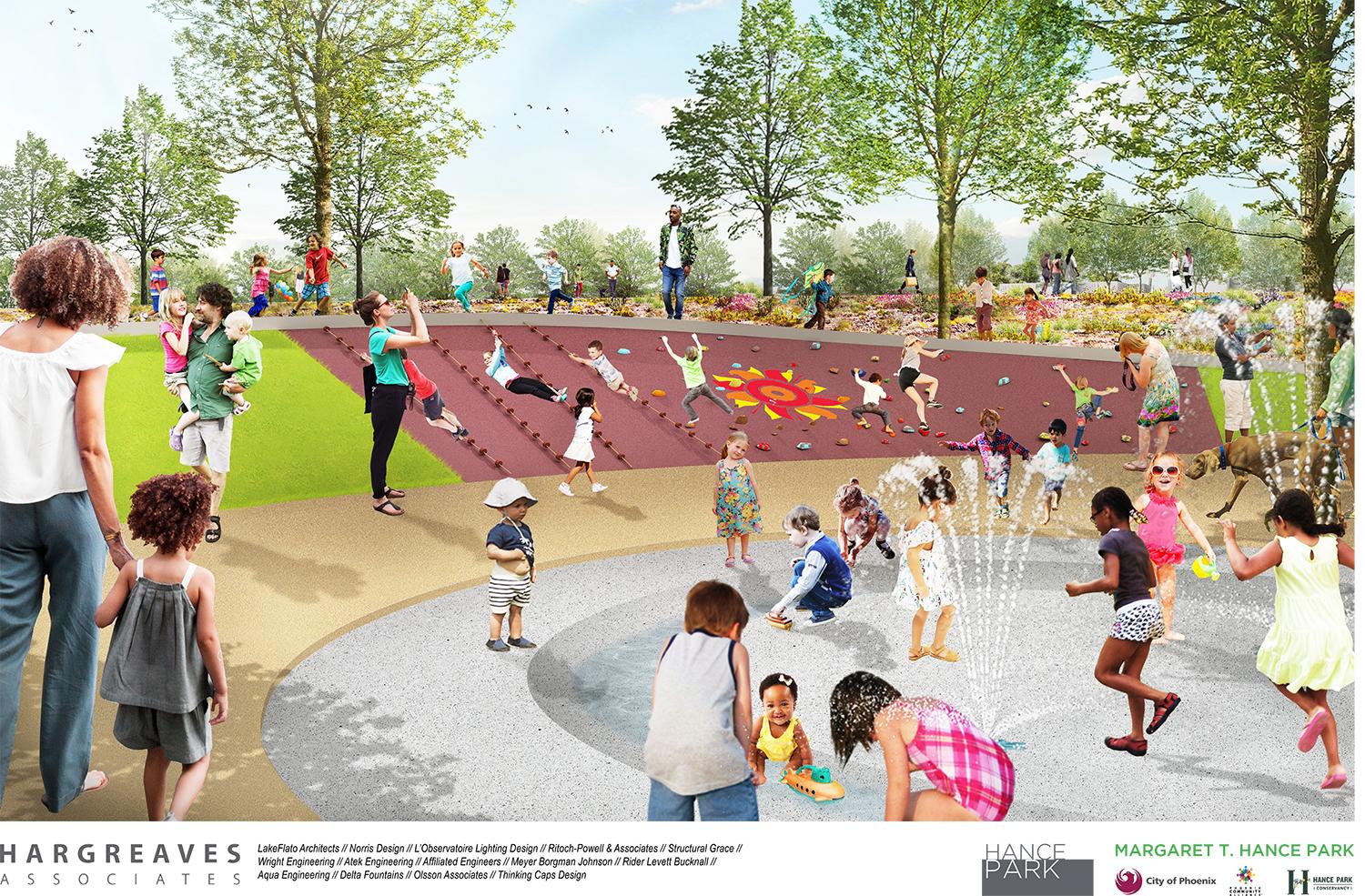 STEVE GOLDSTEIN: There's been such a vision for this generally, and of course I'm going to rain on the parade for a second, but the timing might be a little bit scary for some folks as we're already hearing talk about a recession potentially. Is there concern about that at all that they really need to ramp up this effort even faster to make sure that people still have money that they want to give and can give?

BOEHM: Yeah absolutely. You know I think that a lot of people have been asking "why have we waited so long to really ramp up?" I can't answer that but I can tell you that, you know, this would not be the first time that the park kind of hit lulls. There have been so many campaigns even in the past when they first brought this forward and wanted to build this it was supposed to be, like you know, this incredible vision of park space with a Ferris wheel and the whole nine yards. And it really has never been that and I think that part of it has been, you know, there's always these big plans and we've just hit financial blocks.

GILGER: Yeah. And I want to ask you lastly before we let you go about the sort of city planning perspective here. So the group that's been trying to get this done is business owners and people involved in that neighborhood. This is sort of supposed to be the gateway to downtown Phoenix, it's by Burton Barr Central Library and some of these big cultural sites downtown. What's the idea, like what is their argument that like we need this?

GILGER: Well I think when you look at every big city it has a park, and it's usually in the middle of the city and this is a perfect place to do something like that. And you know as we continue to develop downtown we're running out of big plots of land to host big events. And so I know that's one thing that's been talked about when we have the Super Bowl and the Final Four coming back to Phoenix. That's where people are going to go for those big events. And we want to show that it's more than just a field, that we can really offer some amenities. So I think that's the argument.

GILGER: All right. That's Jessica Boehm with the Arizona Republic. Jessica thanks for coming in.