For seven straight years, the Maricopa Community College District has seen enrollment drop while Arizona’s three public universities keep adding students. But the universities are preparing for a slowdown of their own.

If Chris Joseph’s partially bleached hair and wide smile full of braces doesn’t catch your attention, maybe his story will.

“I felt like I have an extra weight on me just because my parents are not from here,” he said. “My parents are from Haiti.”

Christina Estes/KJZZ
Chris Joseph is a junior at Arizona State University studying tourism development and management with a focus on sustainability.

“Having two parents that worked two to three jobs when I was growing up, barely spoke English, there’s no way I could let my parents go through all of that and not go to school,” Joseph said.

But he worries a lot of students like him — minorities from lower-income families — limit their thinking.

“It's more about keeping your head afloat, you know what I mean? Like, I just want to get to a car and a house. I don’t care about anything else and if I have to put my head down and work, then I’m going to do that," Joseph said.

“There’s absolutely a need to tell the story much better about the value of postsecondary education and training,” said Larry Penley, chairman of the Arizona Board of Regents, the governing body that oversees Arizona’s three public universities.

“Individuals who have a college degree earn more individually, they enable a more prosperous economy overall, and they’re more likely to vote and participate in our democratic institutions as well as volunteer,” he said.

The value of postsecondary education became apparent to more people during and right after the Great Recession. In 2010-11, enrollment within the ten schools that make up the Maricopa County Community College District peaked at 214,732. During the 2018-19 year, total enrollment was 166,766.

Rio’s student population has dropped nearly 7,000 from its peak in 2011-12. As a community college, Rio serves a variety of students: younger people taking classes while in high school, middle-age career changers, and inmates being trained for jobs when they leave prison.

“We have over 600 courses that we offer online,” Smith said.

By launching Rio National this fall, Smith said the college will target more people outside Arizona, including the 11 million living in what are described as "education deserts."

Although Arizona’s three public universities — Arizona State University, Northern Arizona University and University of Arizona — have been enjoying higher enrollments, they are bracing for big changes.

Since the Great Recession, fewer babies have been born. Kenneth Johnson, senior demographer at the Carsey School of Public Policy, University of New Hampshire, found that if pre-recession fertility rates had been maintained, there would have been 800,000 more births in 2018 and 5.7 million more over the past decade.

“I hope it will be viewed as a challenge rather than a catastrophe,” said Nathan Grawe, economics professor at Carleton College in Minnesota.

Over the next decade, Nathan Grawe projects the number of 18- to- 21 year-olds going to college will decline more than 15%. Grawe studied not just numbers but who makes up the numbers and how likely they are to attend college.

“And of course, if we reach new student groups so that the college going rates change in the future, well, that helps to mitigate the decline in the number of kids as well because we now have a larger subset of students who are going on to college,” Grawe said.

To boost enrollment in Arizona, Regent Larry Penley said K-12 education must improve, especially at schools where few or no graduates go on to college. Among other things, that means making sure schools have reasonable access to high speed broadband and hiring more school counselors to provide psychological support, social service resources and career guidance.

Christina Estes/KJZZ
Larry Penley, chair of Arizona Board of Regents, photographed on Aug. 1, 2019, at the ABOR office in Phoenix.

The American School Counselor Association (ASCA) compiled ratio data from the 2016-17 school year using the most recent available data. It found the national student-to-school-counselor ratio was 455-to-1. The ASCA recommends 250 students per school counselor. Arizona’s ratio was 905 to 1.

In addition to improving K-12 education, Penley said Arizona universities need to improve financial transparency by providing user friendly online calculators, "So that you can enter the information about your performance in high school, family income and any other information so that you can actually calculate what it will cost me in tuition."

Back at ASU, I asked junior Chris Joseph what could be done to support students.

“The school needs to stop running things like a business,” he said “It was so obvious that when we had our orientation that they want students to live and spend money on campus.”

Joseph lives at home in southwest Phoenix and watched a close friend drop out after her family got behind on dorm payments. She can’t register for classes until the bill is paid.

He’s also seen friends drop out after a year because even though they’re smart, Joseph said they’re not good test takers. He would like to see schools offer what he considers more practical, real life ways to demonstrate they understand the material.

“It makes me sad just because I have been so blessed and so lucky to travel and meet people,” Joseph said. “When I get to meet the first African American president of the United States of America, when I get that and I come back home, it’s just like I look at things completely different. You know what I mean? And it’s a privilege. I am privileged in that sense.” 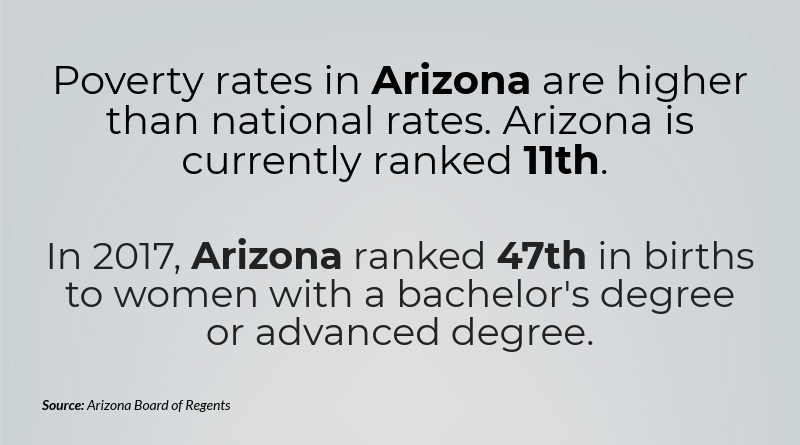 Joseph said he also can understand how some people feel like the system is stacked against them. Whether real or perceived, the impact goes beyond the individual. Arizona’s future prosperity depends in large part on reducing poverty rates, growing an educated workforce and boosting our tax base.

Kate Smith said growing enrollment must be done with purpose and meaning. She sees more opportunities for partnerships with businesses, industries and other institutions of higher education.

“I believe there are so many people out there who are in need of education that I’m not in competition with other universities and colleges,” Smith said. “I’m working with them to work against the forces, the issues, the barriers, that keep students out of education.”

Penley said Arizona has an opportunity, “if we have the will to create the kind of financial aid that raises high school graduation rates and increases college attainments.”

Arizona’s three public universities provided over $767 million in financial aid for the 2018-19 school year. Need-based aid is based on family income and merit aid is awarded for academics and athletic excellence.

A spokesperson for the Arizona Board of Regents (ABOR) said last year the state appropriated $26,568,056 for the Arizona Financial Aid Trust (AFAT). The appropriation includes a small fee each student pays annually but ABOR was unable to provide a breakdown by deadline.

Several states have implemented "College Promise" programs that provide no cost tuition and fees for a large percentage of entering community college students. In a 2019 enrollment report, the American Association of Community Colleges looked at Tennessee and Oregon for evidence of enrollment impacts.

In 2016, public and private entities launched Achieve60AZ, a statewide goal of 60% of adults attaining a postsecondary degree or credential by 2030. Today, we’re at 45%.

The nonprofit, nonpartisan alliance of more than pledges to: