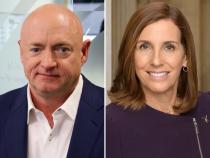 According to an Associated Press poll, 8 in 10 Americans — including three quarters of Republicans — favor a Federal law requiring background checks on all public and private firearms purchases.

In Arizona, which will likely have a contentious Special Election for U.S. Senate in 2020, support for similar legislation is lower than the national average.

“You have to be able to figure out how to pass this legislation and respect the rights of responsible gun owners at the same time,” Kelly told KJZZ’s The Show. “It’s been done, and it’s been shown in states that have these laws, we are protecting people and families from gun violence.”

Sen. McSally adds that any legislation needs to be bipartisan, but she agrees with Kelly’s stance on respecting the rights of law-abiding gun owners.

“[Legislation’s] got to be bipartisan, it’s got to solve the problem, and it’s got to protect due process and the constitutional rights of law abiding citizens,” she said.

“So much more needs to be done as a society,” she said. “We need more early intervention, more mental health capacity for those who need care, and for those who are potentially at risk for hurting others.”

Kelly supports so-called "red flag" laws, which he says may have prevented the 2011 Tucson shooting that wounded his wife, Rep. Gabby Giffords.

“[Loughner] was clearly mentally ill,” he said. “If there was a red flag law, maybe something could’ve been done. But you also need stronger background checks.”

EDITOR'S NOTE: This story's headline has been modified to clarify that the candidates support legislative solutions while maintaining differing views on the issue as a whole.