How Arizonans Can Help Save Monarch Butterflies 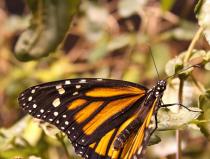 storyblocks.com
The monarch butterfly population has declined by 80% over the last two decades.

To help the declining population of monarch butterflies, the Arizona Game and Fish Department is seeking volunteers to help plant milkweed this fall.

The monarch butterfly population has declined by 80% over the last two decades.

Last winter, the monarch population along the coast of California reached a historic low, which was actually below the extinction threshold.

Gail Morris with the Southwest Monarch Study said that while she doesn’t expect a big migration this year, the breeding grounds in Arizona and Utah are showing high counts of monarchs.

“It's just really wonderful to be able to see them in all of our breeding grounds in the numbers that we are," Morris said. "So we're hopeful all is not lost with monarchs.”

Morris said Arizona has the second-highest number of milkweed species, which is the only plant a monarch butterfly can breed on.