A representative for the family in the bystander video that led to the firing of Phoenix police Officer Christopher Meyer said his termination was expected and "should not be considered a brave step."

In an email, the Rev. Jarrett Maupin said, "The Ames-Harper family has filed a $10 million notice of claim against the city of Phoenix. A settlement/mediation conference has been scheduled for Dec. 18 of this year."

The video, which gained national attention, showed the officer cursing and pointing his gun at a car occupied by Dravon Ames, his pregnant fiancee, Iesha Harper, and their two young daughters. Police had said the family was suspected of shoplifting and failed to obey commands.

In the past decade, Phoenix has paid tens of millions of dollars to settle claims against the city's police department.

The Phoenix Finance Department tracks settlements for cases involving death, injury, unlawful arrest and other allegations of wrongdoing against police. The city said records are maintained for 10 years unless special circumstances require they be kept longer.

The Finance Department tracks payments based on the year of the incident. For example, if someone filed a claim alleging misconduct that occurred in 2015 and the city council approved a settlement in 2019, the payment would show up in the 2015 claims.

For fiscal year 2018-2019 which ended June 30, 2019, Phoenix received 63 claims against the Police Department. No payments for allegations of misconduct in the fiscal year show up because nothing has been paid. Litigation or settlement negotiations could be underway.

The graph includes information from the Phoenix Finance Department covering July 1, 1999 to June 30, 2018. 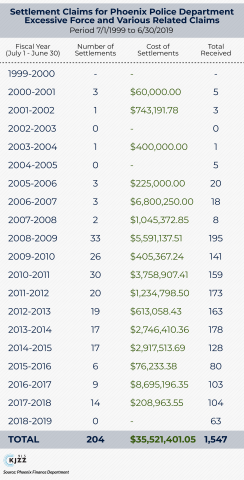