Consider for a moment the last book you held in your hands. The tactile senses that come with reading like the smell of new pages, the thick weight of the paper and a freshly cracked spine. All held together by an important piece of book-making — the binding. Right here in Phoenix is a local, and world-renowned, book bindery.

Inside a machine, behind a glass window, individual sheets of a book get pushed methodically toward a dozen churning sewing needles.

The page sections are threaded with a state-of-the-art sewer as one of many parts of a book's creation process. 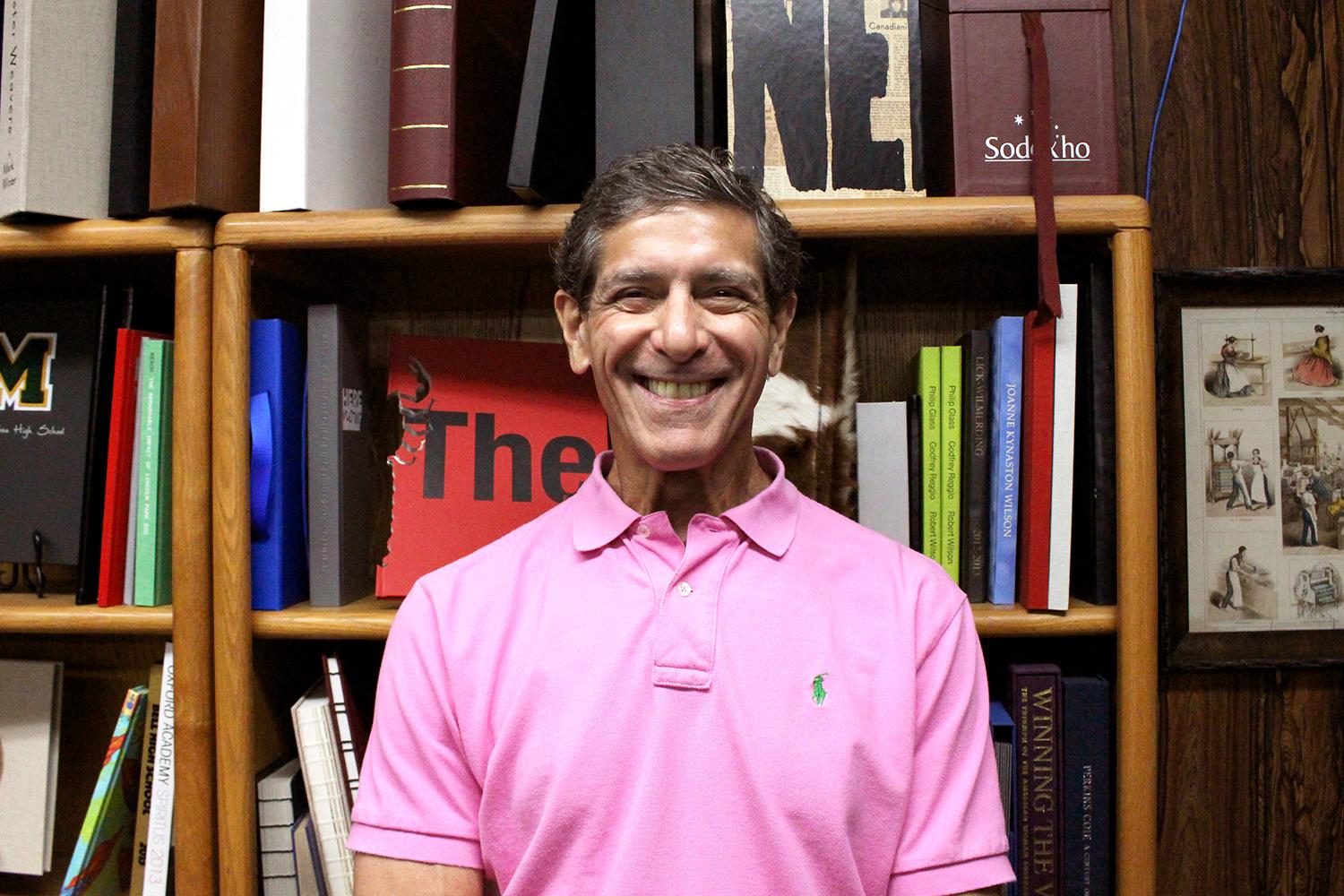 “The generic term for this is Smyth sewing. Because a guy named Joseph Smyth invented this process a couple hundred years ago," he said.

Roswell had an original, 75-year-old Smyth sewer, too. It was one of the many machines adding to the din of the 50,000-square-foot warehouse his business resides in. Some were a couple hundred years old and those, along with the state of the art automated machines, still get used today.

"We’ll do a run of five copies, or eight copies, but we also do tens of thousands of copies," Roswell said. "So we have all these different machines and process for different quantities and sizes. A lot of cases it’s still easier for us to use a 200-year-old book press than a high power, automatic machine."

Roswell’s parents started the company in the 1960s. Their clients were the Phoenix Public Library and university libraries. They would repair periodicals out of their garage. That business dwindled with the rise of the internet. 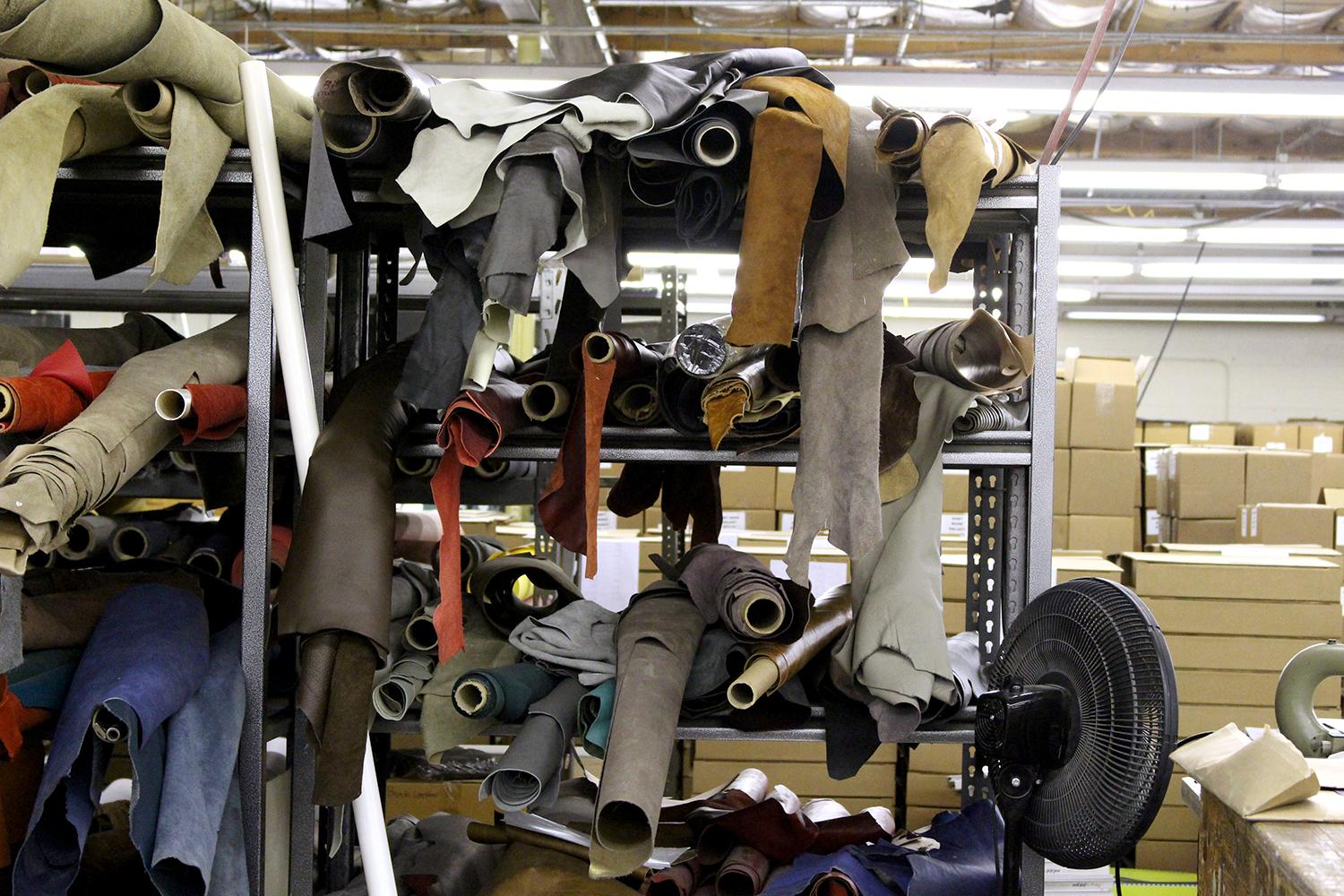 Now, the binding business has evolved to do a lot of high-end promotional packaging for brands.

“A lot of the work we do is not book-related,” he said.

Roswell said he followed his parents into this business because of his own love for books. When you first walk into the bookbindery in Maryvale near Grand Avenue, that special book smell smacks you in the face.

That smell could be the book binding glue, or the hundreds of pallets of freshly printed paper sheets, pre-binding. Roswell wasn't sure because he couldn't smell it when I asked him what it is.

“Do you know what I’m talking about?”

“Maybe you’ve been around it so much you don’t smell it anymore,” I said.

“I don’t smell anything.”

“Justin, you smelled it, right?” I asked my photographer.

“It’s like when you walk into a really old book section of the library. You don’t know what it is?” I asked. 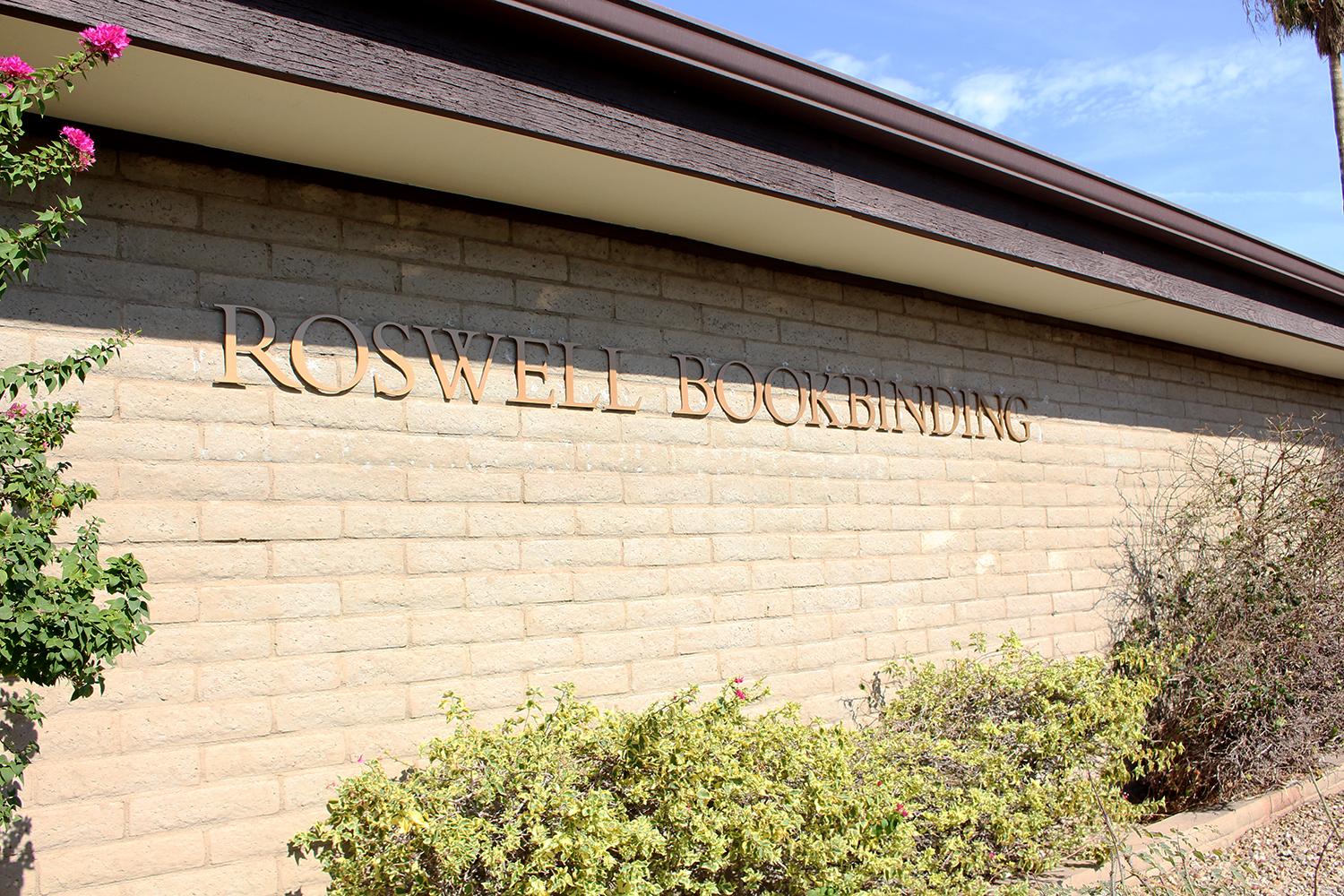 Moving on, Roswell showed Justin and me around the warehouse floor.

Among the shelves, rolls of book cover fabric and glue machines clattering in a sectioned-off room.

“And here we do conservation and restoration,” Rowell said. 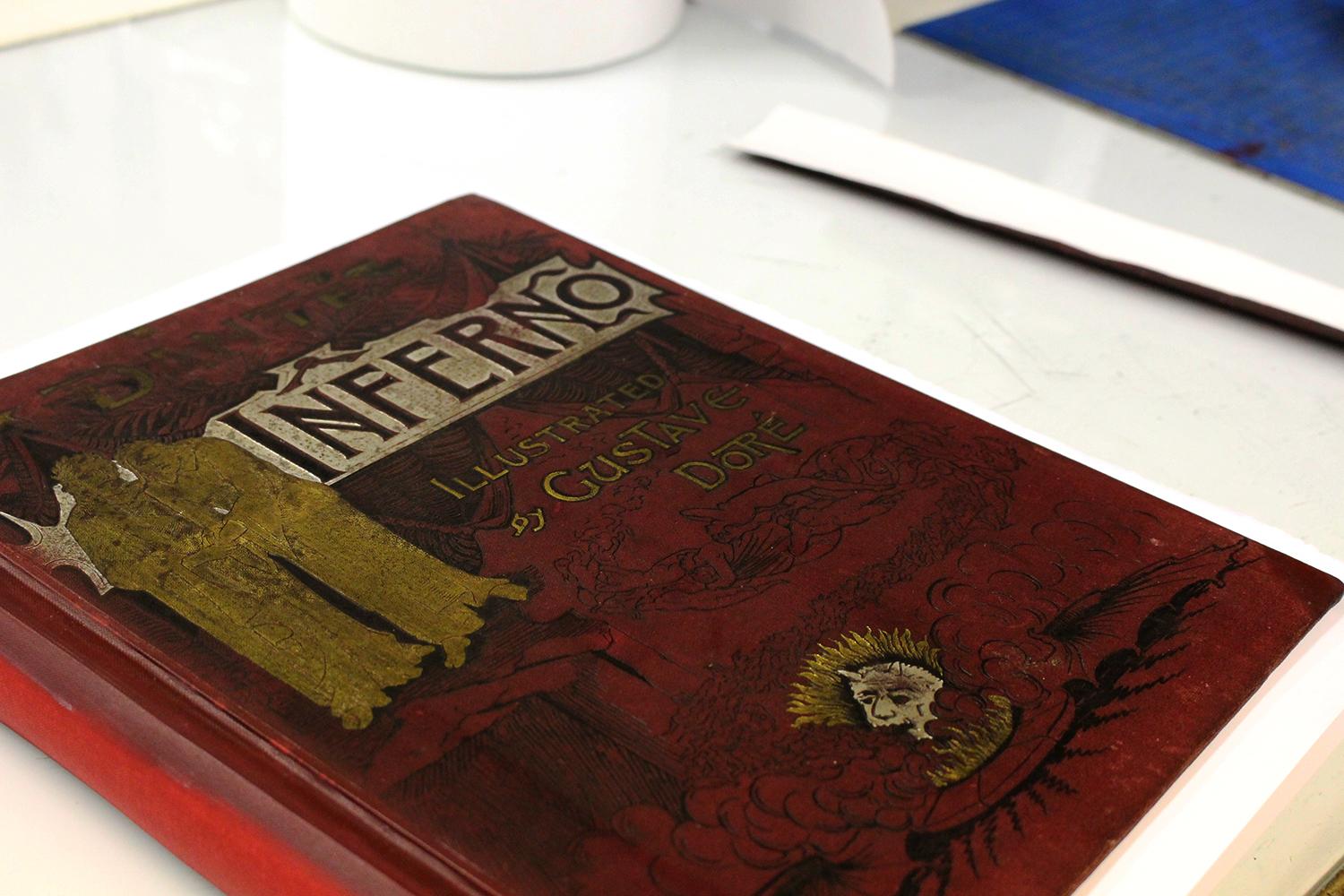 Justin Stabley/KJZZ
Roswell Bookbinding does restoration of Bibles and heirloom books like this version of Dante's "Inferno."

“They don’t brag, but they’re artists,” he said.

Raqiba Ahmadi is working on a rare edition of Dante’s "Inferno."

She replaced the spine and the end papers.

“Restoration is my favorite part because I’m restoring people’s history and family heirlooms and everything," she said. "When they come pick it up, they’re very happy. We get thank-you letters all the time.”

And no two books are the same.

"It’s like a haircut, you go to a salon, you want different things, books are the same. Every restoration is different," she said. "I've been here for 15 years, and I'm still learning."

Ahmadi is also working on a Bible made in the 1600s that is missing a cover.

Roswell Bookbinding does a lot of work with Bibles, including the binding of one very special Bible in particular: the St. John’s Bible.

Mike opened up a cardinal-red box at the top of a stack. He gently lifts out the crimson leather-bound and gold-stamped tome inside.

"This is Italian calfskin, the boards are birch, these are genuine silver clasps," he said.

It was the size of a large portrait painting and is one of seven volumes in a set. A limited number of these sets will be produced. 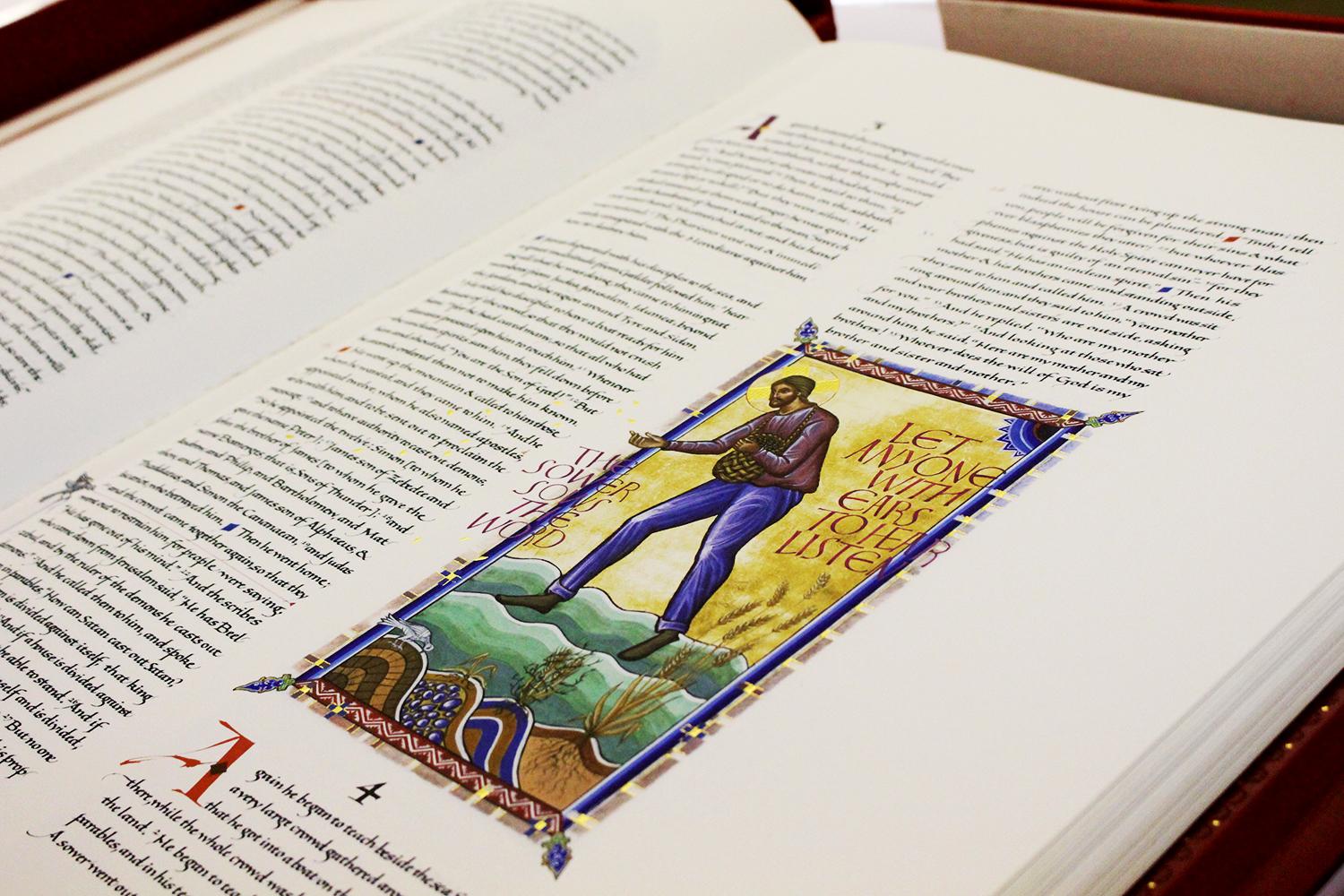 The original Bible, hand-scribed by six different calligraphers with original paintings on calfskin vellum pages, is in Collegeville, Minnesota, at St. John’s University.

Jim Triggs at St. John's oversees the program that led to the printed heritage editions bound here in Phoenix.

Triggs said the original is meant to evoke the same feeling as ancient Bible texts, hand-scribed by Benedictine monks before the printing press was invented. St. Johns is Benedictine. The project was art-directed by celebrated calligrapher Donald Jackson.

"The mission of this project is to ignite the spiritual imagination of people around the world. And how do you reach the world from Collegeville, MN?" Triggs said. "And that's why these heritage editions were made which were also created under the direction of Donald Jackson. The idea is that there are institutions around the world that, mainly through donors, have acquired these sets." 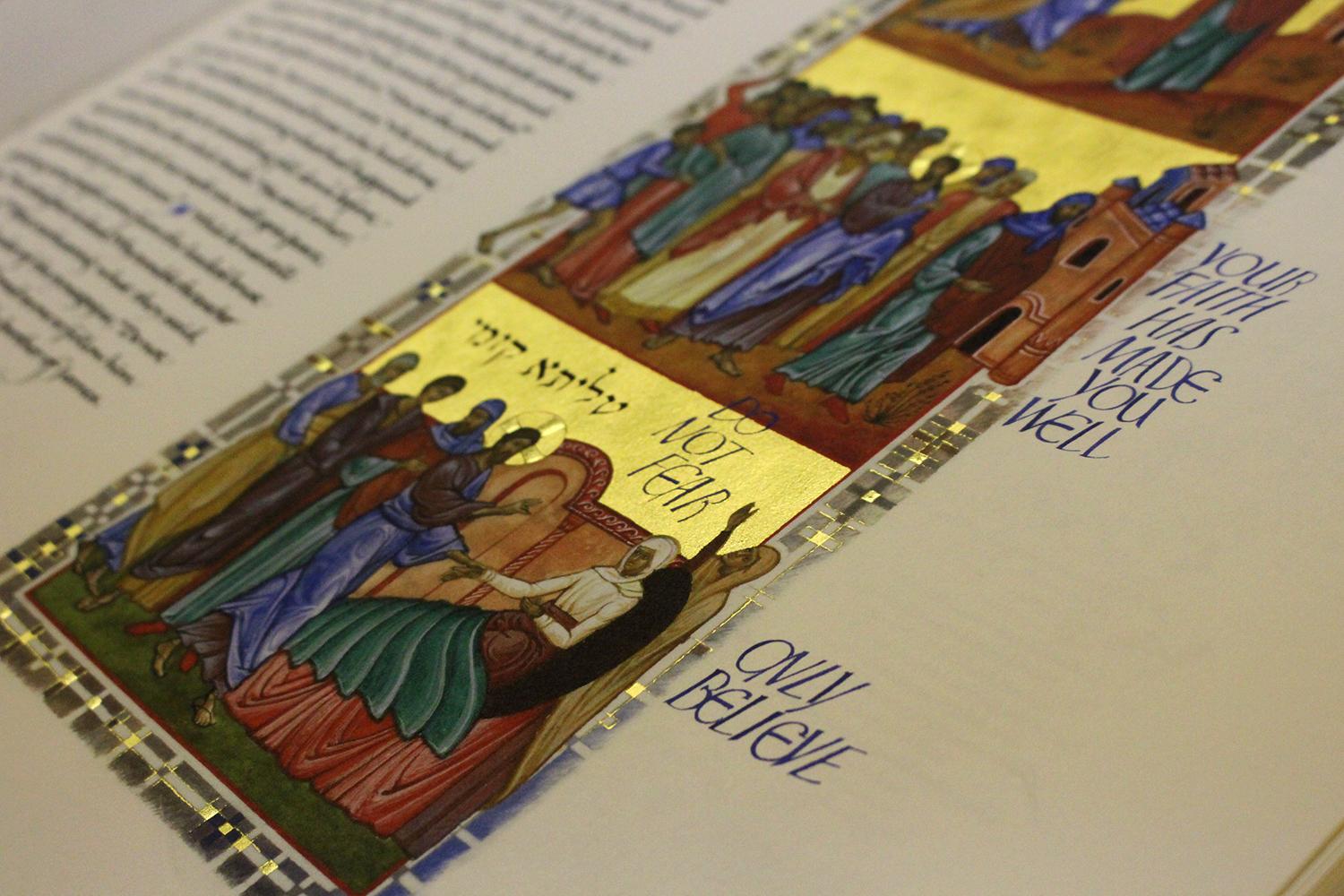 Justin Stabley/KJZZ
The St. John's Bible is printed on a German press in Minnesota and originally commissioned by St. John's University.

There’s a heritage edition at the Library of Congress and the Vatican. Arizona State University has a copy, according to Roswell. And the materials come from around the world. The paper is made in New Hampshire, the leather is Italian, the printing is done on a German press in Minnesota, the book’s headband is handmade in Pakistan: and finally, it’s all bound together in Arizona.

"And so what Roswell has done for us is sort of that exacting ability to get the feel of these ancient manuscripts in a modern book," Triggs said.

The custom-made materials and the meticulous production process contribute to the Bible’s cost.

Back in Maryvale, Roswell turned the cotton pages, admiring the vivid pictures and calligraphy.

"I’ve been looking at these for over 10 years, and I’m still blown away by it whenever I go through one," he said.

A decade into the project, there are still about a third of the heritage editions left to bind.

“For us, it’s the job of a lifetime," Roswell said. "Literally.”

And Roswell Bookbinding will get credit for their place in history, at the back of each heritage edition, in small print.

EDITOR'S NOTE: The story has been updated to reflect where the heritage editions are printed. 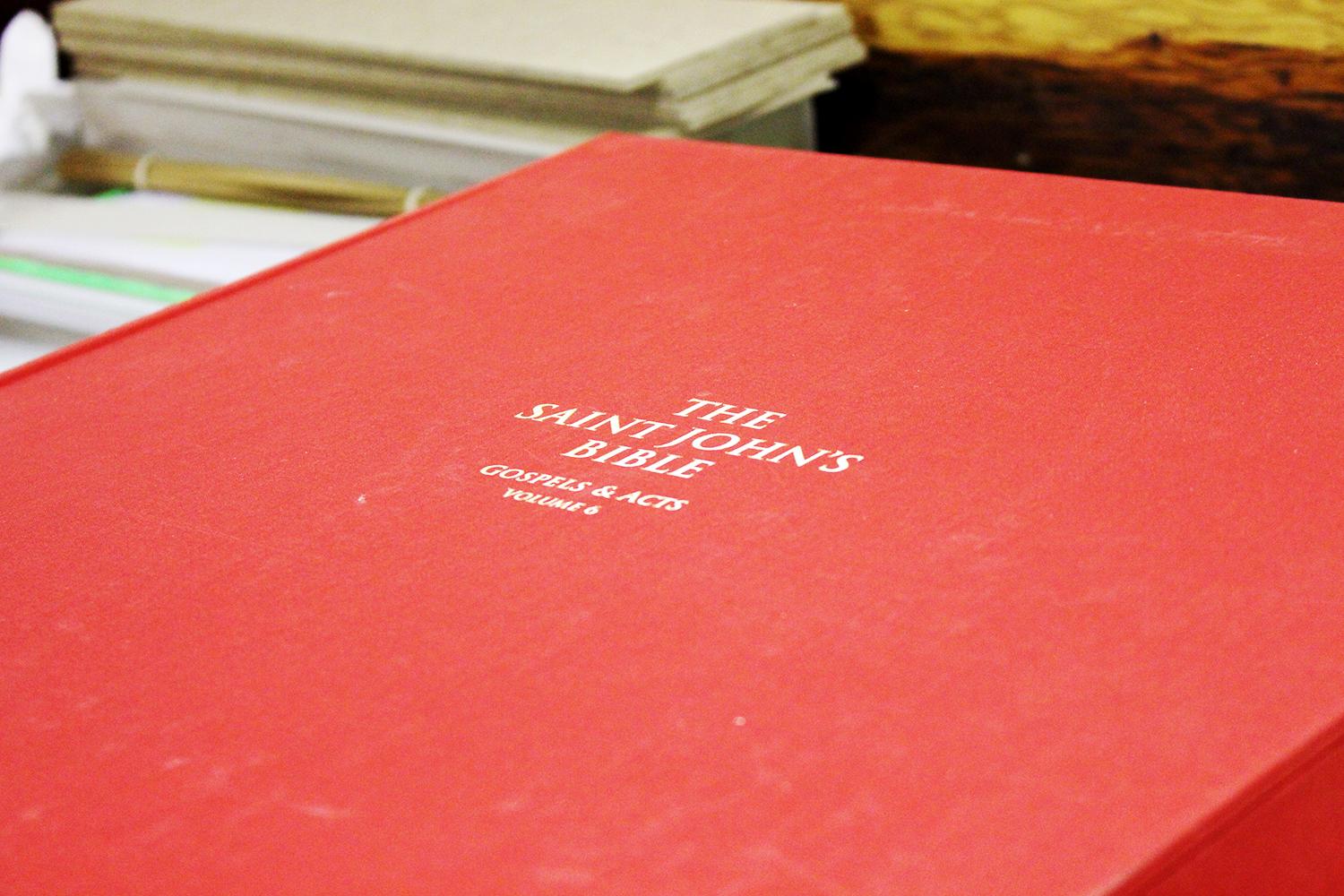