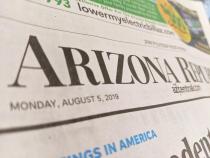 Sky Schaudt/KJZZ
The Aug. 5, 2019, edition of the Arizona Republic.

Two of the country's largest newspaper companies have agreed to combine in the latest media deal driven by the industry's struggles with a decline of printed editions.

GateHouse Media, a fast-growing chain backed by an investment firm, is buying USA Today owner Gannett, promising to speed up a digital transformation as readers shift online. The companies say they are committed to "journalistic excellence" — while also cutting $300 million in costs every year.

The resulting company would be the largest U.S. newspaper company by far, with a print circulation of 8.7 million, 7 million more than the new No. 2, McClatchy, according to media expert Ken Doctor.

John Leach is the former managing editor at the Arizona Republic. He says the companies have talked about the cost savings.

"... But they haven’t talked about newsroom staffing levels. Both have had a history of managing very carefully, making money for their stockholders and steadily reducing staff. GateHouse more than Gannett …" said Leach.

Rick Edmonds, a media business analyst with the Poynter Institute,  listened to a press conference call about the merger on Monday.

"The news to my ear in the call, which included the financial results for the second quarter, is that both companies are still having a difficult time with revenue," said Edmonds. "Revenues, on the same property basis, were down about almost 10% at Gannett and about 7% at Gatehouse."

Newsroom employment fell by a quarter from 2008 to 2018, according to a July report by Pew Research Center.

GateHouse has grown quickly in recent years, and its buying spree includes the Palm Beach Post, bought last year for $49 million, and the Austin American-Statesman, on which it spent $47.5 million. It publishes 154 daily newspapers, most in small- and mid-sized towns.

The combined company would have more than 260 daily papers in the U.S., including the Arizona Republic, along with more than 300 weeklies.