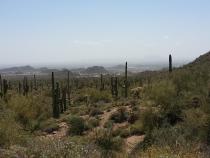 Scientists in Tucson are asking the public to help fund a valley fever vaccine. Researchers are creating the vaccine from the same fungus that causes the disease.

Valley Fever affects around 50,000 people a year in Arizona and California. Since the disease affects such a limited population, researchers are having trouble getting grants. Director of the Valley Fever Center for Excellence Dr. John Galgiani says he is appealing to the public for funding.

“It’s not a common way of doing that, but this is a special situation and there is a special group of people who I think feel very passionately about this," said Dr. John Galgiani, director of the Valley Fever Center for Excellence.

That special group of people is dog owners. Lisa Darling is a veterinarian at the Arizona Animal Welfare League.

“I do see dogs surrendered to our shelter because owners are limited in what they can afford,” she said.

Treatment can be expensive and long term. Darling estimates she loses one in 10 of the dogs she treats with the disease. Galgiani said there is research that indicates this vaccine would work on both dogs and humans.

“It also might be the fastest route," she said. "'Cause getting a vaccine approved for a veterinary application might be faster than convincing the FDA it's safe enough to market for human use.”

Galgiani estimates he needs about $200,000 to bring the potential vaccine to the next step. He hopes to have dogs in clinical trials in a few years, which could ultimately lead to Food and Drug Administration approval for humans.