Mary Lynch has thyroid cancer. Her friend and coworker Shavone Begay has family members who are sick. They worry it's linked to the contaminated water they've been drinking for decades.
Laurel Morales
By Laurel Morales
September 20, 2017
Tweet 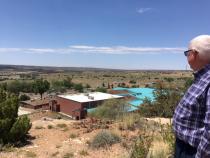 Laurel Morales
Sanders School Superintendent Dan Hute looks out over the school and the small town of Sanders that's dealing with toxic levels of uranium contamination in the drinking water. 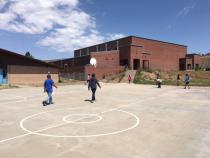 Laurel Morales
University of New Mexico researchers found the Sanders schools had the highest level of uranium contamination in the town.

This is Part I of A Poisoned People, a Fronteras Desk series on how the Navajo are contending with uranium contamination decades after the mining companies have left. Read Part II here.

What if you woke up one day to the news that the water you had been drinking most of your life could be killing you? That’s what happened to Mary Lynch.

On her desk she has pictures of all six of her children including two foster kids.

Light scars on her neck reveal where a doctor removed Lynch’s thyroid. She has no family history of cancer.

Two years ago the town of Sanders, Arizona, learned their drinking water was toxic. The school district installed a water filtration system this summer, but many people like Lynch are sick with conditions linked to uranium contamination.

And now the Lynches are hamstrung with medical bills.

“It’s been tough on our family,” Lynch said. “It was tough for just me but then when my daughter was diagnosed that was …”

At the elementary school a group of kids play basketball on the playground.

“They don’t train you how to handle these kinds of things in superintendent school,” said Dan Hute, Sanders school superintendent. “It’s like not on my list here, folks.”

The Arizona Department of Environmental Quality told Hute the water is toxic. It’s OK to drink, but not for extended periods. Hute didn’t take any chances.

“Our fountains are off but the hand washing is on,” Hute said. “And we ended up putting bottle water dispensers in every one of our classrooms.”

From 1944 to 1986, mining companies blasted 30 million tons of uranium out of Navajo land. The federal government purchased the ore to make atomic weapons. As the Cold War threat weakened, the companies left, abandoning 521 mines. (Photo by Laurel Morales - KJZZ)
The Sanders School District has installed filters so it can drink the tap water again.

Since then many Navajo people have died of kidney failure and cancer, conditions linked to uranium contamination. Some 600 people live in the tiny town of Sanders, and Hute said everyone knows someone who is sick.

Hute drives to the new water filtration system. It’s one thing to put in the filter, he said, but they’re still living with the contamination.

“God I have been aggravated,” Hute said. “I’ve been really disenchanted with the bureaucracy, the complete failure to acknowledge anything on the federal side … Everybody just wants to bury their head in the sand and ignore it.”

Over the last decade the federal government has assessed the hundreds of abandoned mines on Navajo land and prioritized 46 based on high radiation levels and close proximity to homes. The U.S. Government Accountability Office estimates that millions of gallons of water contaminated by mill tailings were released into groundwater through unlined ponds.

So far the EPA has actually cleaned up only nine mines, including one upstream of Sanders — Church Rock. In 1979, a dam breach at the Church Rock mine spilled 94 million gallons of radioactive waste into the Puerco River.

That river runs right through Sanders. Navajo Council Delegate Raymond Smith Jr. said cleaning up the mine is progress. But what about the groundwater?

“How do we address that?” Smith said. “How do we prevent this from continuing to be a problem?”

Smith said everybody is pointing a finger at someone else.

The federal government has been trying to hold the mining companies accountable but many have gone bankrupt. Three companies have reached multimillion-dollar settlements for the cleanup of about 150 abandoned mines.

At this rate, cleanup of the Navajo Nation will likely take decades.