As Southwest Water Managers Grapple With Climate Change, Can A ‘Grand Bargain’ Work? 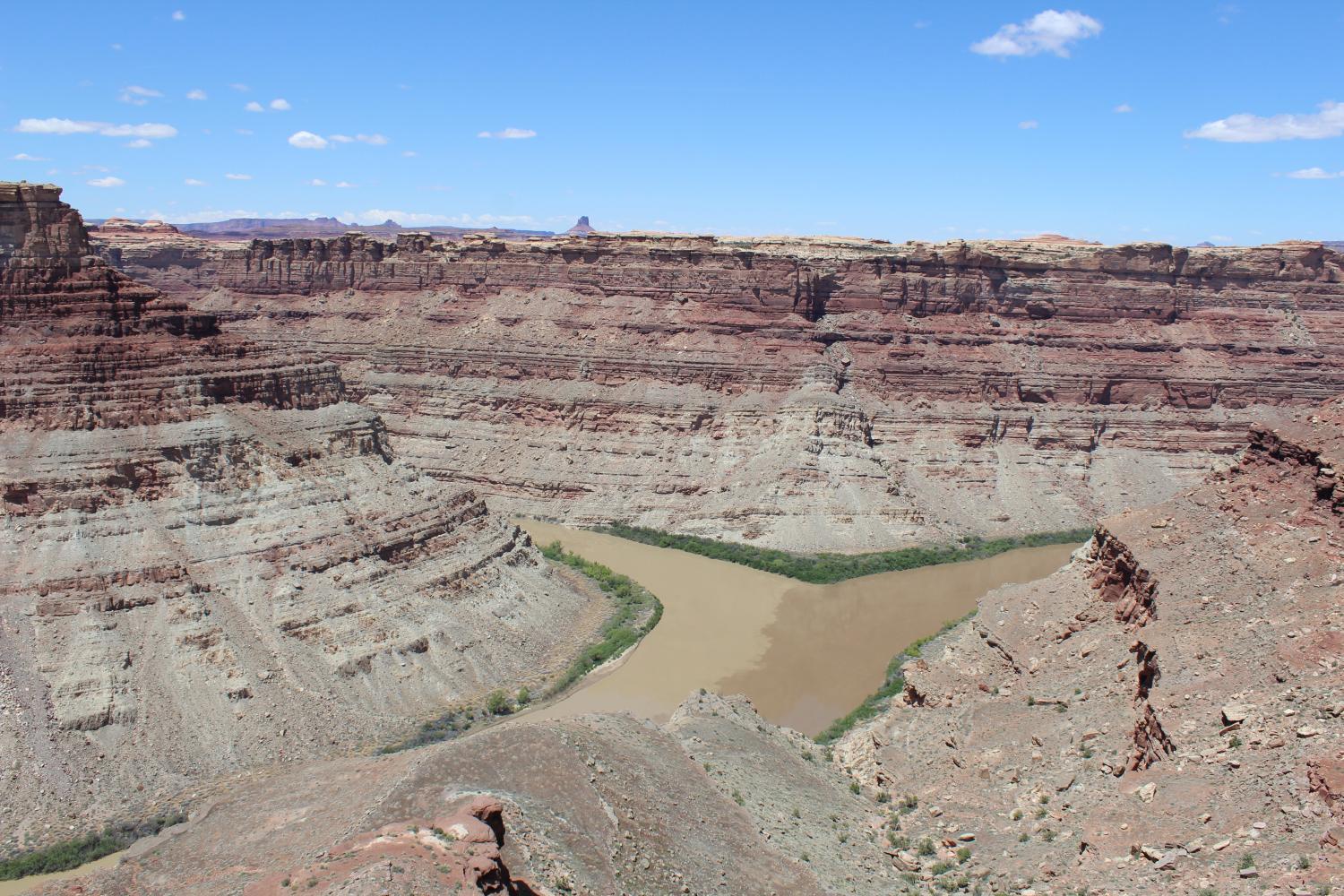 Water managers on the Colorado River are facing a unique moment. With a temporary fix to the river’s scarcity problem recently completed, talk has begun to turn toward future agreements to manage the water source for 40 million people in the southwestern U.S.

Climate change, growing urban populations and fragile rural economies are top of mind. Some within the basin see a window of opportunity to argue for big, bold actions to find balance in the watershed. Others say the best path forward is to take small, incremental steps toward lofty goals, a method Colorado River managers say has worked well for them for decades.

That tension was on full display at a June gathering of water agency leaders, environmentalists, scientists and federal bureaucrats in Boulder, Colorado, where they reflected on the recently signed Colorado River drought contingency plans and began to envision what might be included in a long-term solution. (The conference at the university’s Getches-Wilkinson Center was sponsored in part by the Walton Family Foundation, which also provides funding for KUNC’s Colorado River coverage.)

John Fleck, director of the University of New Mexico’s water resources program, and Eric Kuhn, former general manager of the Colorado River District, used the opportunity to shop around a concept they’re calling the “Grand Bargain,” which they say would address the watershed’s fundamental supply and demand imbalance.

From the beginning, Fleck and Kuhn argue in their new book, “Science Be Dammed: How Ignoring Inconvenient Science Drained The Colorado River,” scientists warned about promising water to too many people in the Southwest but were sidelined by politicians looking to grow crops and cities. That led to inflated figures in the compact that plague water managers today. The original sin was putting more water on paper than existed in the real world.

That problem has been made clear by a 19-year drought that caused the river’s biggest reservoirs — Lakes Mead and Powell — to drop to their lowest collective volume since they were filled. Studies have shown climate change already sapping the Colorado River’s flow, causing more evaporation, and shrinking the snowpack that feeds it.

Luke Runyon/KUNC
Lake Mead has been dropping for years, and if it dips too low it could trigger a shortage in the Lower Colorado River Basin.

A 1922 compact split the Colorado River into two legal and geographic entities: an Upper and Lower Basin. Colorado, Utah, Wyoming and New Mexico make the Upper Basin. California, Arizona and Nevada make the Lower Basin. The document promised each basin 7.5 million acre feet of water each year. That water is then split among the states that make up the basins. A later agreement promised Mexico 1.5 million acre feet of water from the river, without specifying which basin was responsible for delivering it.

In order to get the compact signed, Upper Basin and Lower Basin leaders agreed to measure the river’s flows at a place just downstream of modern day Glen Canyon Dam and use it as a point of reference. If the amount of water measured at that specific point ever dipped below the contracted amount in subsequent years, the Lower Basin could call for its water, shutting off users in the Upper Basin if need be.

That hypothetical move is called a Compact Call, and if it happened, water managers worry it would set off a cascade of events across the Upper Basin, forcing water users — cities, farmers and industry alike 0151 to cut back some or all of their use. It would also likely throw all the Colorado —River states into a prolonged Supreme Court case.

The Grand Bargain would rebalance some of the compact’s bad math, Fleck and Kuhn said. In it, the Lower Basin would agree to abandon that longstanding right to demand water from the Upper Basin if it runs short.

In exchange, the Upper Basin would agree to a cap on future water development. For more than a decade, the Upper Basin has used about 4.5 million acre-feet of water annually, well below its compact cap of 7.5 million. But a slate of projects in the Upper Basin represent an attempt to tap into that unused entitlement.

“Then both sides are giving up a cherished right and (agreeing to) a compromise that has the potential to then bring some stability and balance in the long run and remove a lot of the risk of really catastrophic conflict,” he said.

The threat of a compact call from the Lower Basin and the visions of big new reservoirs in the Upper Basin are driving all kinds of self-serving behavior, Fleck said.

But for Fleck and Kuhn’s idea to work, water managers throughout the basin need to convince themselves and their state’s leaders of one thing: there is no more additional water to be had in the Colorado River basin.

“Managing to the amount of water we actually have may sound intuitive and logical but we’ve never actually done it on this river,” said Southern Nevada Water Authority general manager John Entsminger at the Boulder conference.

Within the next year and a half, water managers like Entsminger will be sitting down to figure out life beyond 2026. That’s the deadline to come up with a new set of guidelines to manage the Colorado River, last agreed to in 2007. He listed his top priorities in those negotiations, including a discussion of limiting new Upper Basin uses. Without addressing that, he said, it would be hard to get a comprehensive deal done.

“For us to be successful, we’ve all got to lose,” Entsminger said. “The future of this river is less water, and we’re all going to have to get by with less.”

"The future of this river is less water, and we're all going to have to get by with less."
— John Entsminger, Southern Nevada Water Authority manager

But tinkering too much with the river’s legal underpinnings doesn’t sit well with Pat Tyrrell, former Wyoming state engineer and the state’s representative on the Upper Colorado River Commission.

“What you cannot do is cap at our existing level of development without saying to essentially the four Upper Basin states, ‘We’re going to let you die on the vine,’” Tyrrell said. “We have to have room to develop.

Tyrrell suggested Lower Basin states “go to the ocean,” meaning making bigger investments in desalination to provide additional freshwater, before lecturing Upper Basin states that they need to cut back as well.

“If we try to open or amend the compact I think the results will be horrible,” Tyrrell said. It’s a familiar refrain from a state well below its current entitlement to Colorado River basin water, with plans to tap more.

But Eric Kuhn, one of the Grand Bargain’s proponents, said the Upper Basin has been using roughly the same amount of water for years, while at the same time population continues to grow.

“One of the myths that we have to break is that economic prosperity requires a higher consumptive use,” Kuhn said.

Busting the myth of population growth or booming economies requiring greater volumes of water will be key to getting a deal done that adequately addresses climate change, Kuhn said, “so we can sell some of the ideas that will be necessary, to live with what we got, not what we thought we had 100 years ago on the river.”

The tension between the incremental, conservative approach of risk-averse water managers and the alarm bell-ringing of climate scientists and environmentalists will certainly play into the renegotiation of the 2007 guidelines.

“Everyone knows climate change is a big deal but the efforts and the steps that we’re taking are incremental steps that aren’t getting us where we need to get fast enough,” said Jen Pelz, wild rivers program director for the conservation group WildEarth Guardians.

The incremental approach works when you have many parties trying to come up with a solution and unwilling to give up too much in a compromise, Pelz said. The revolutionary approach requires an acknowledgement that real danger exists.

“I think the Colorado River is in deep danger,” Pelz said.

Water managers conceive of the Colorado River as existing to deliver water to people, Pelz said. What’s often lost in lofty discussions about law and policy is that the river is integral to how ecosystems function in the Southwest.

“There’s a huge blind spot around what the environment needs,” Pelz said. “Who’s going to provide that vision for the environment? It’s not going to be the water managers. That’s not their constituency.”

This story is part of a project covering the Colorado River, produced by KUNC and supported through a Walton Family Foundation grant. KUNC is solely responsible for its editorial content.