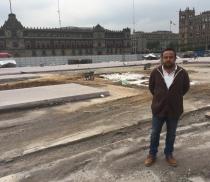 Rodrigo Cervantes
Archaeologist Gonzalo Emilio Díaz Pérez works in the main square of Mexico City, known as El Zócalo, to research the remains of an old monument from the 1800's. 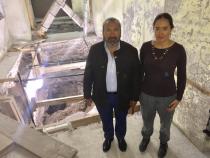 Rodrigo Cervantes
Raúl Barrera and Lorena Vázquez are the archaeologists that head a team investigating the Huey Tzompantli, an ancient Aztec structure made of human skulls.

MEXICO CITY — The capital of Mexico has been built in layers for centuries, and underneath its modern skyscrapers and historical buildings rest plenty of ruins. The past few days have been significant for those who work to unearth the buried history.

Archaeologists have discovered some hidden treasures in downtown Mexico City from the Aztec era and from the period when the United States invaded Mexico.

A few steps away from Mexico City’s cathedral in downtown, researchers found a stone box with the remains of a wolf and a large number of ornaments made of gold, most likely an Aztec offering to their god of war, Huitzilopochtli.

And in the same area, under a Colonial building, archeologists found the remains of the legendary Aztec “Huey Tzompantli,” a wall and tower built with the skulls of sacrificed people.

The original structure was located on the main plaza of Tenochtitlan, the ancient Mexico City and capital of the Mexica — or Aztec — empire. Its remains were buried by Spanish conquistadors in the 1520s.

“The exhibition of skulls has happened in different cultures all over the world, but here what is different is that it is made in rows, in different levels and in towers,” said Lorena Vázquez, the archeologist in charge of the excavations.

Vázquez explained that the skull tower was a way for the Mexica people to demonstrate power, honor their gods and keep the life cycle spinning.

“For the Aztec people, when they were sacrificing someone, it was a ritual that involved not only death, but also life, because it is just one concept,” López said.

And very near to where Vázquez and her team work, another group of archeologists found the remains of an unfinished independence monument, right in the heart of Mexico City’s main square, the Zócalo.

Gonzalo Emilio Díaz Pérez is one of the archeologists working at the Zócalo site and explained the flat, circular structure was built in 1843. The monument was most likely planned to be a tall column, but it could not be built as the United States invaded Mexico.

The Mexican government, then headed by president Antonio López de Santa Anna, was in crisis. Old illustrations from the 1840s depict the American troops resting on the area where the structure is, right in front of Mexico’s National Palace.

The he remaining structure of the unfinished monument survived for a few decades. In fact, people started to call Mexico City’s main square after it: “zócalo” is the spanish word for the base of a monument and the name that still prevails. However, it was buried by the construction of the modern-day main square of Mexico City.

The “zocalo” discovered by archaeologists will be buried again —  this time with special protections — as the structure can't tolerate current conditions. However, researchers hope to be able to open to public the excavations of the Huey Tzompantli in the future.