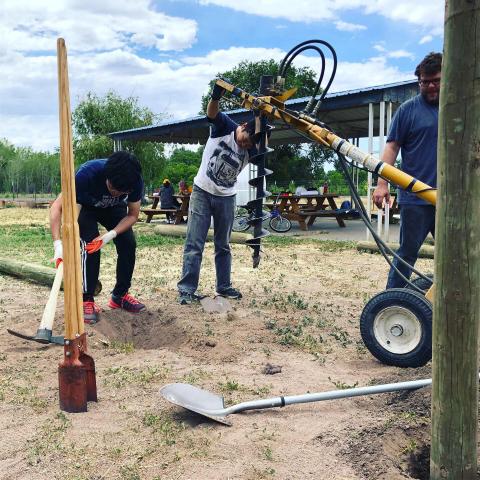 For many Arizonans, it's a quintessential summer activity to pick up their stuff after a monsoon storm has blown objects all around the backyard.

But what if you were at a school and you find, after a storm, your whole playground, with metal jungle gyms and everything, was blown to the other side of the yard?

That’s exactly what happened earlier this summer to a Boys and Girls club in Eager, Arizona. The students told their director, after an 80 mile per hour gust of wind, that the playground was gone.

"They come in after school and go ‘Ms. Mannie! Ms. Mannie! The jungle gym is in the field!" Said Mannie Bowler, director at the Boys and Girls Club of Round Valley.

She said that the metal part of the playground was flipped upside down and flown about 20 feet away. The kids couldn’t move that part, but they worked together to roll the plastic tower back into the building.

And, almost like fate, Bowler found an old email from the Design School at Arizona State University asking if there was a project that they could team up on.

"So I jumped at that like nothing," she said. "I’m like 'Oh, the design school wants to work with us? Hallelujah!"

Bowler reached out to the design school and the Boys and Girls Club students got the opportunity to help build a new playground.

Dakota Werts, a graduate student in industrial design at ASU, got to work on the project and said that the young students and the college students actually wanted a lot of the same things: curved monkey bars, nets they could climb up into tall towers and slides, lots of slides. The ASU design students worked on building it, but Dakota said they couldn’t do everything the kids asked for.

"One of them wanted a whole golf course. It was really fun to play around with them," he said. "One of them just asked 'just bring Spider-man out there and it should be great."

No Spider-man, unfortunately, but the students of the Boys and Girls Club in Eager, Arizona now have a new, custom-built playground that hopefully won’t get taken away in the next storm.

EDITOR'S NOTE: The story has been updated to correct the spelling of Dakota Werts' name.