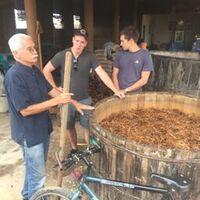 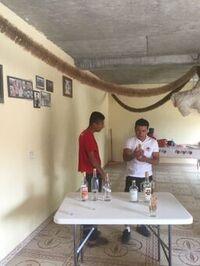 Rodrigo Cervantes - KJZZ
Rigo Cruz (center) chats with his brother about the mezcal his family produces, at their home in Oaxaca, Mexico. 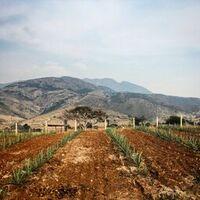 Rodrigo Cervantes - KJZZ
The midlands in the state of Oaxaca, Mexico, are filled with hills and rows of agave plants cultivated to produce mezcal. 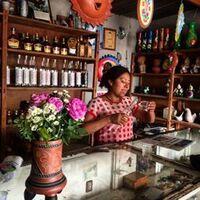 Rodrigo Cervantes - KJZZ
Mezcal tasting is common at the shops in Santiago Matatlán, the Oaxacan town self-proclaimed as “The World Capital of Mezcal.” 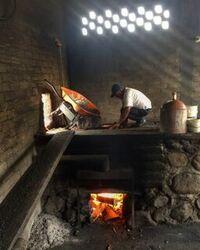 Rodrigo Cervantes - KJZZ
Mezcal is a traditional and ancestral beverage with a complex process, including distillation and agave cooking in wood ovens.

OAXACA DE JUÁREZ — Mezcal has become a booming business for an impoverished Mexican state, replacing cheap unauthorized labor to the U.S. as a chief export. The pungent booze is being marketed throughout the U.S. and not just at the consumer level: the industry is looking for serious investors as it continues to grow.

The state of Oaxaca is the heart of mezcal country. People in 50 markets around the globe enjoy this smoky spirit, and most of it comes from here.

The landscape in mezcal country is dominated by rows of agave crops and wooden farmhouses. You can smell the sweet agave being cooked and hear the agave hearts being crushed to extract its juices in distilleries called palenques.

Agave is the essential element for making mezcal. And the demand of this drink keeps rising: according to the Mexican government, in 2016 it earned third place in exports of alcoholic beverages — after only beer and tequila — generating $26.8 million.

Some adventure-seeking tourists come to the palenques to see how the drink is made and learn, among other things, that the worm inside a mezcal bottle is pure and unnecessary decoration.

But more recently, another kind of visitor has been arriving: investors.

Alvin Starkman used to be a lawyer in Canada, but 13 years ago, he became a Oaxaca resident and a mezcal expert. He provides tours of mezcal country in small towns like Santa Catarina Minas, San Baltazar Chicicapan and Santiago Matatlán, the town self-proclaimed as “The World Capital of Mezcal."

Recently, Starkman has started noticing an increasing influx of investors.

“At least once a month I am taking out somebody who want to export mezcal to the United States or England or Australia or Germany,” said Starkman. “The small palenqueros are really happy with what’s happening with the industry.”

The United States is the biggest market for mezcal outside of Mexico. Two thirds of exports go there, and Mexican authorities and producers are regularly traveling across the border to hunt for investors. For instance, the Mexican government recently supported a commercial mission to New York, introducing investors with producers and distributors.

“For us, the government’s quest for foreign investors has been major boost for the market. The mezcal boom would not exist without foreign investors and buyers,” said Hipócrates Nolasco, president of the National Council of Mezcal.

According to Nolazco and the Secretary of Economy of Oaxaca, the investments are improving the economy of the families that produce mezcal and are even attracting migrants back from the United States.

That’s the case of Rigo Cruz. He lived in Los Angeles for 12 years and worked in a bar, but recently decided to come back to Oaxaca.

“I think it’s better here, we just have to meet more people, learn more about mezcal and do something big,” said Cruz. He wants to participate in his family’s tradition: mezcal production.

His family is currently distilling around 2,400 bottles a month for a brand that already exports to the U.S., and they want to keep expanding.

Thomas Kalnik, co-founder of Peñasco, was part of one of Starkman’s tours. He’s a possible investor in the Cruz’s palenque.

“We are focused on importing artisanal mezcal for distribution in the U.S. market," explained Kelnik, a Boston resident.

Kelnik is concerned that the renegotiation of the North American Free Trade Agreement (NAFTA) could bring more taxes to his business, making it unsustainable. However, he is optimistic about the impact that more mezcal trade could bring.

“More investment and more appreciation of small batches of mezcal in the United States would serve to increase the development in small communities in Oaxaca, increase the opportunities for education and employment, and possibly lead to less incentives for migration to other countries,” Kelnik said.

The entrepreneur is excited with the rising prices and demand of mezcal in his home country. Last year, the value of mezcal exports to the U.S. was of almost $19 million; four times more than the United Kingdom, the second largest market overseas.

And mezcal has a promising future not only in the U.S. — Oaxaca knows the potential of its signature drink, and will host an international Mezcal fair in July and an international business meeting of distilled drinks in August.