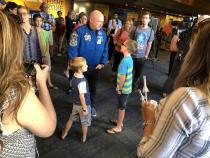 As he stood in the shadow of the Kennedy Space Center on the 50th anniversary of the Apollo 11 mission, Astronaut Mark Kelly discussed the impact the moon landing had on his own life and the country’s.

After 15 years as an astronaut and four missions to space, Kelly said he is looking forward to the next generation of astronauts and what they can accomplish.

“We've got to either go back to the moon, we've got to continue to operate the International Space Station, and one day, we've got to send people to Mars,” Kelly said. “I really believe the first person that's going to walk on the planet Mars is alive today, and it might be one of you kids out there watching this.”

Kelly — who is running against Martha McSally for U.S. Senate in the 2020 Arizona special election — answered questions via Facebook Live about his own experiences and predictions for the future of space travel. But prior to the questions, he took time to reflect and emphasize the significance of landing on the moon.

“What Apollo did for us as a country, what it did for our economy, I mean it drove our economy for decades, and so did the Space Shuttle program and the Space Station Program, so I'm so hopeful that we continue to do this," Kelly said.

Kelly doubled-down on his support for space exploration and predicted the United States will send an astronaut to walk on the surface of Mars between 2030 and 2040.

“We've got an exciting future out there, so if you're a young person, and you're thinking about studying science, or math or engineering, something like that, please do it,” Kelly said. “Work hard, study, we really need you. We need the future astronauts that are going to one day go to the surface of Mars, and maybe that can be you.”