As Trump Moderates Rhetoric With Mexico, The Peso Wins

As Trump Moderates Rhetoric With Mexico, The Peso Wins 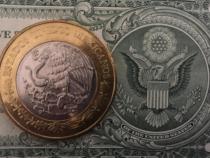 Rodrigo Cervantes
The Mexican peso regained value in the first few days of April against the U.S. dollar.

MEXICO CITY — After Donald Trump’s inauguration in January, the Mexican peso reached its lowest level against the U.S. dollar. But in April, the Mexican currency is showing signs of recovery.

The past year was tough for the peso (MXN). First came the impact of the oil market in early 2016. And then came what Agustín Carstens, the Mexican Central Bank governor, called “Hurricane Trump.”

The Mexican peso reached its lowest in January, right after the inauguration of Donald Trump. And as President Trump’s "Twitter war" against Mexico escalated, the peso’s depreciation continued.

The Mexican peso is what some experts call a “proxy currency,” which helps it on trade markets but makes it sensitive to the behavior of external factors and policies. And that’s why financial speculation based on political issues — for instance, Trump's rhetoric against the North American Free Trade Agreement — can impact its status.

Analysts and experts attribute the peso’s comeback not only to improvements in the global oil market and solid politics from the Mexican Central Bank. They see a significant impact thanks to the way Trump’s administration has moderated its position toward Mexico.

So, following that estimation, if both countries keep negotiations going without political tensions or disruptions, the U.S. dollar and the Mexican peso have better chances to “stay healthy.”