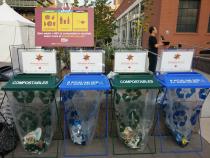 Photo by Andrew Bernier - KJZZ
Recycling and Compost Bins like this one were located throughout Super Bowl Central
Carrie Jung /KJZZ
Super Bowl Central, seen here before Super Bowl XLIX in 2015, was one of the largest events ever held in downtown Phoenix.

When downtown Phoenix was transformed into Super Bowl Central earlier this month, a lot of waste was produced. However, the vast majority of it never went to the landfill.

The results are in and it looks good for a city with only a 16 percent recycling rate, less than half the national rate. Super Bowl Central was one of the largest events Phoenix has ever hosted and now with the waste sorted out, the city kept 73 percent of event waste out of local landfills.

John Trujillo with the city’s Public Works Department said while most weight came from aluminum and plastic recovery, a new program kept heavy organic waste from entering the landfill.

“In the past, these special events, we’ve just had recycling and garbage," Trujillo said. "This time we decided to use the food waste from the super bowl and see what we can do with food and how we can turn it into compost. Because we just completed a pilot program where we’re actually composting now.”

Food waste and soiled paper made up about a third of the waste diverted. This is seen as a success for the waste recovery program. The city's long-term goal is a 40 percent rate of all citywide waste diverted by 2020.