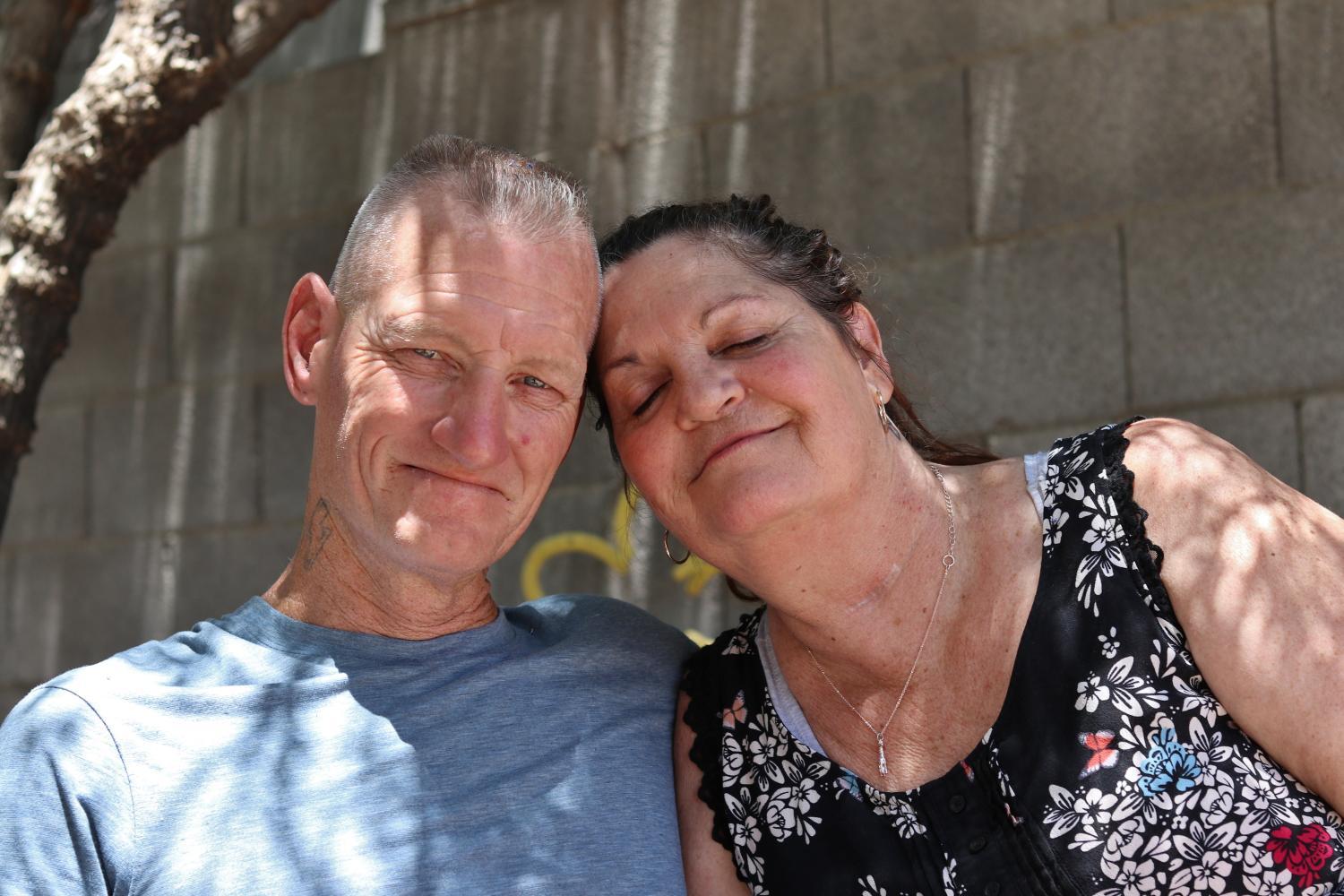 Jimmy Jenkins/KJZZ
Jack and Linda Noble in their backyard in Phoenix.

Jack Noble marvels at the simple rituals of Saturday afternoons he once took for granted.

“This is part of everyday life now,” he said, gleefully showing off a freshly organized shed. It was one of several weekend chores assigned by his wife that Noble was looking forward to tackling.

“Cleaning out the shed, taking out the trash, cleaning up the backyard — it’s called living,” Noble said, “not existing. That’s what you do in the Department of Corrections.”

Noble would know. He was incarcerated three times for a total of more than 20 years in Arizona prisons. His most recent sentence was for six years, but, to his surprise, he was recently released five months early. Just a few weeks ago, he was called into an administrative office at the Douglas prison on a Friday.

Noble was in shock.

Noble is one of the first group of people serving sentences for non-violent drug offenses to be released from prison after Gov. Doug Ducey signed SB 1310 in June.

The bill, sponsored by Rep. Eddie Farnsworth, R-Gilbert, was one of only a few sentencing reform efforts that made it to the governor’s desk after a legislative session that began with great expectations from criminal justice reform advocates.

According to the Department of Corrections, 161 inmates were released from June 10 through July 10 under SB 1310.

Noble calls his release “a good thing, because I came home early. But also, it made the coming home a lot harder.”

Noble said he was planning on going through the Arizona Department of Corrections’ second-chance program before his release, which helps inmates get necessary documentation.

Instead, “They kicked me out the gate,” Noble said. “They took me to the bus station and said, ‘OK, buy your ticket and have a good life.’”

So Noble and his wife, Linda, spent the first few days of Jack’s release driving all over the Valley getting his papers in order — things he needs to go back to work, like his driver’s license and Social Security card.

“I got lucky,” Noble said. “I have a wife that loves me and that I love. She’s stood by me and stuck with me, and I had a home to come to. But there’s a lot of guys that are getting kicked out that have nowhere to go.”

Several former inmates who spoke to KJZZ on the condition of anonymity said they, too, had been released without basic documents needed to transition back into society.

A spokesman for the Department of Corrections said “under typical circumstances, the release planning process begins 150 days prior to the inmate’s earliest release date.” ADC says because SB 1310 applied retroactively, some inmates were eligible for release immediately after it was signed. The department says it had only a matter of days to act.

This is a scenario that state Rep. Walter Blackman, R-Snowflake, says he tried to warn his colleagues at the Legislature about.

“I didn’t really like 1310,” Blackman said. “Because 1310 did not have the wraparound services tied into the bill.”

Blackman introduced his own more aggressive reform bill in the 2019 session, but it didn’t go anywhere. Blackman says this summer, as chairman of the Earned Release Credits For Prisoners Ad Hoc Committee, he will work to make the bill stronger by putting more resources into re-entry and working with nonprofits who specialize in helping people transition home.

Blackman acknowledged that he had also heard of former inmates being released from ADC without important documentation. “You have some folks getting out of prison without a Social Security card or driver’s license,” he said.

State Rep. Kirsten Engel, D-Tucson, served on the House Judiciary Committee that heard Blackman’s reform bill. She will also serve on the Earned Release Credits For Prisoners Ad Hoc Committee this summer. She called the reports of inmates being released without proper resources “very concerning.”

“I’ve heard, exactly as you said, that people are just being let out on the street,” Engel said, “rather than ADC going through the usual procedures. The impression I get is disorganization.”

For non-violent offenders still in Arizona prisons and their loved ones, confusion over who qualifies for an early release abounds.

Taryn Thomas is engaged to a man incarcerated at the state prison in Yuma. She says the Arizona Department of Corrections alerted her of her partner’s pending release suddenly one day in June.

“They called and said they had given him his release packet and clothes, and said he’s agreed to the stipulations of his release,” Thomas said. “All I had to do was go pick him up.”

Thomas made the four-hour drive with her mother from her home to the prison to discover there had been a mistake. She says ADC said her partner would be released the next day instead. Thomas says she was then directed to speak to an ADC employee in charge of sentence calculations

She says it was finally decided that her fiance had not completed a functional literacy class.

“This has me so stressed out,” Thomas said. “I feel helpless. I’m doing all I can do to advocate for him.”

She says her fiance tries to keep a positive outlook despite still not knowing his release date, but she thinks the uncertainty is wearing on him. “He tries to act happy on the phone, but you can hear the crackling in his voice.”

In a letter to lawmakers, ADC Director Charles Ryan estimated there could be more than 7,000 inmates eligible for early release over the next several decades.

Ryan also stated there were 98 inmates eligible for release as of June 11 that were being held because they had not completed required programming.

Charles Ryan Letter to Legi... by on Scribd

Thomas’ fiance, like other inmates who may qualify for early release under SB 1310, is in prison for a non-violent drug offense. Thomas wonders how years of prison will help drug offenders change their lives. “How is this rehabilitation? And how does sending small-time drug offenders protect our community?”

Rep. Engel said the fact that so many people could be impacted by SB 1310 shows just how many people are in prison for low-level crimes.

“We should not be putting people in prison for these types of offenses,” she said. “They’re much better dealt with by programs on the outside.”

Engel says she hopes the summer committee on sentencing reform will be an opportunity to create a more “comprehensive bill.”

“We need to reassess who should be in prison and who shouldn’t be,” Engel said.

Becca Fealk is a spokesperson for the criminal justice reform advocacy group American Friends Service Committee. She says SB 1310 has started a conversation.

“It’s great to think about sentencing reform, but we really need to stop the flow into the prison in the first place,” she said. “Because people affected by 1310 should never have been incarcerated. They should be getting help in our communities through mental health and public health services and not criminalized.”

Rep. Blackman said he has been working specifically with the Phoenix Dream Center on re-entry issues.

“They work with individuals while they are in the prisons,” he said. “When they transition, they do the transition with them.”

“They teach them the basics of getting up on time, getting ready for an interview, being responsible, to make sure these folks can survive outside of prison,” Blackman said.

“I happened to be at the parole office recently on 16th Street where they woke a guy up the night before and told him he was going home the next day,” Najee-Ullah said. “ He didn’t even have a parole officer assigned to him.”

Najee-Ullah says he’s seen an increase in people looking for help and he fears the inmates released by SB 1310 are at a high risk for recidivism.

“We want to be there for the guys,” Najee-Ullah said, “because if they don’t have anybody who has their best interest at heart, it’s easy for them to revert back to old ways.”

David Sheppard is the founder of Arizona Advocates For Ex Offenders. He says when an inmate gets out, the situation is basically the same, whether they’ve done two years or 20: it’s tough.

“You’re already labeled. You’re afraid. It’s like you got this big sign on you that says, ‘I’m a felon,’” Sheppard said.

Without anywhere to go, Sheppard says formerly incarcerated people often return to the friends and family who encouraged the behaviors they are trying to change.

“A lot of those places are just as unhealthy as they were when you left,” Sheppard said. “They have no structure. They have nowhere to go for basic resources.”

Sheppard says releasing inmates without a place to live will increase their chances of returning to prison. “You have to survive. You’re gonna go back to some of the things you did before. When you send guys out there with no tools to rebuild, you’re setting them up to fail.”

Sheppard agrees with Blackman on the principle that re-entry services should start much earlier for all inmates.

“Re-entry should actually start on entering the prison,” he said. “Because that’s when you build this person to look forward to re-entry into society. It needs to start then.”

He Needed To Belong Somewhere

Linda Noble sits in the backyard with her husband, leaning on Jack’s shoulder under the shade of a lavender tree.

“I brought this tree back to life,” she says looking up. “It was dead. Now it’s overgrowing, but it’s beautiful and it smells really good in the evenings when it’s cool.”

Linda married Jack while he was in prison three years ago.

Jack says for the first time in a long time, he feels like he’s home. And he intends to stay here.