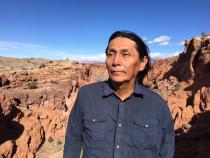 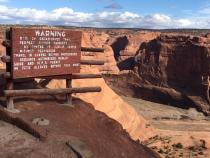 Laurel Morales
A sign above White House Trail says this is the only part of the canyon where visitors can go below the rim without a Navajo guide. About 40 families live on the floor of Canyon de Chelly. 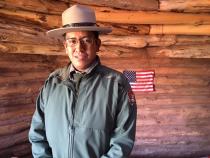 Laurel Morales
Ravis Henry is a park ranger for Canyon de Chelly National Monument in northeastern Arizona. He grew up in and around the canyon. 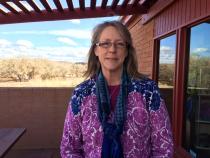 Laurel Morales
Lyn Carranza is the superintendent of Canyon de Chelly National Monument. She says the philosophy at the park has changed. It's about giving up control, she says. 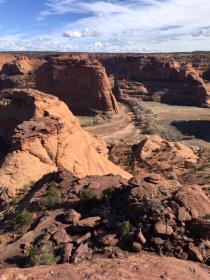 The Navajo Nation is suing the federal government for taking more than 300 sets of human remains from Canyon de Chelly National Monument.

The canyon, situated deep in the heart of the Navajo Nation, is unique. It’s the only national monument that a native community still calls home. But for the Navajo, home isn’t just for its living, it’s where their dead belong as well.

Ravis Henry keeps one foot rooted in the Navajo world and another in the western world. Henry wears the green uniform and stiff hat of a federal government employee, but practices Navajo ceremonies and speaks the Navajo language with his elders.

“I don’t consider myself a true traditional Navajo,” Henry said. “But if you compare me to many other folks of my generation, I think many of them would say I’m more traditional than other folks.”

“We’re sitting inside the traditional home of our people,” Henry said. “The anthropological term today is hogan. But that actually came from the Navajo word of ‘whole one’ and whole one simply means home.”

No one lives in this log hogan with it’s fake cats curled up on the bed. It’s a model that sits outside the Canyon de Chelly visitors center.

The monument sees about 800,00 visitors a year. Many drive the road around the rim, but others want to take a closer look and hike beneath the red sandstone walls to the canyon floor. Unlike most national parks, they’re not allowed to enter without a Navajo escort.

“When people come to the visitors center and ask why they can’t enter,” Henry said. “First I talk about the sacredness and what this place means to our people, and talk about the ruins and preservation efforts that we’re trying to uphold here. I also talk about it as a home. And I ask people, ‘how would you like it if I came to your home, uninvited walked through that gate, crossed your lawn, come inside sit on your couch and turn the TV on, dig in the fridge?’”

About 40 families live and farm on the canyon floor.

People have lived here for more than 4,000 years, starting with the prehistoric Puebloans, or Anasazi as they’re sometimes called. The Hopi, Zuni and Navajo have all called this place home.

In the late 1800s outsiders discovered the abundance of ancient pottery, baskets and stone tools in caves and ruins.

“Way before the national park was established a lot of people were coming here to collect artifacts,” Lyons said. “There was a big interest in American antiquities particularly by museums on the east coast, the west coast and in Europe, so a lot of people were coming to Canyon de Chelly to collect antiquities to display them. And there weren’t a lot of laws to protect these artifacts.”

The federal government convinced the Navajo council that the tribe needed help to protect the canyon. In 1931 President Herbert Hoover used the Antiquities Act to designate Canyon de Chelly a national monument. But archaeologists continued to study and excavate the cultural sites, this time with the government’s permission.

When Navajo guide Adam Teller was a boy growing up in the canyon his grandmother sent him to spy on the archaeologists. She worried about the bodies buried in the canyon being disturbed by the digs.

“My grandma used to tell us that you don’t go climbing around the canyon walls and the caves,” Teller said. “There are burial sites, ancient sites where people used to have ceremonies and holy people are buried.”

He said several Navajos living in the canyon told the archaeologists to stop digging.

“Most Navajo people saw archaeologists as grave robbers,” Teller said. “And the Navajo were undermined and their authority was not important to these people as the way I saw it.”

The Park Service took hundreds of artifacts and more than 300 sets of human remains and put them in their collection in Tucson. It’s called the Western Archeological and Conservation Center. Conservators protect some 6,000 artifacts in a facility that’s the size of an airplane hanger, so they can be studied by appointment only.

“What my grandmother used to say that when you remove something from a place it’s like taking out a very sacred organ in the body,” Teller said. “The body won’t function as well when that organ or that artifact is removed.”

Teller said the spirits who reside in the canyon are powerful. Many Navajos believe Canyon de Chelly is the place where deities like Spider Woman and Changing Woman reside.

“So medicine men, when I was a little boy, they used to go to the rocks and they used to take mud they had prayed on and deemed sacred and they threw it on the walls as a way of waking up the gods,” Teller said. “And the gods would come out of the rocks to bless them.”

But Park Service officials said some Navajo canyon residents asked the government to remove some of the artifacts to protect them from looters, erosion or bad spirits.

That all changed in 1990 when Congress passed the Native American Graves Protection and Repatriation Act. The park service attempted to follow the law and has been looking at each bone to identify whether its Hopi, Zuni, Puebloan or Navajo.

The agency argued in court that until it determines that, it needs to safeguard the remains. Monument Superintendent Lyn Carranza said it’s their job to make sure the remains go to their rightful owners.

“It is important to stress that there is a sacredness to the canyon, to a lot of different people,” Carranza said. “We in the National Park Service, the philosophy has changed at this point in time, our desire is to repatriate.”

But the Navajo Nation wants all of the remains returned to their tribe so they can rebury them. According to the complaint, removing the remains has caused the tribe illness, depression and damaged crops.

In their latest appeal to the 9th Circuit Court the tribe’s attorney argued the Treaty of 1868 gave them exclusive use and occupation of Canyon de Chelly. The judges sent the case back down to Arizona district court for further proceedings.

While Superintendent Carranza could not discuss the case, she did say the park service’s philosophy at Canyon de Chelly has changed. She said she must do more than just consult with the tribe.

“We have to co-manage. It’s not asking them how we should manage their land,” Carranza said. “It’s ‘how should we manage this together?’ And I think that’s the change in thinking that has happened in the last few years here at Canyon de Chelly as we’re moving forward. It’s giving up control of everything.”

It’s remembering this is their home or, as Ravis Henry translated, ‘whole one.’ Many believe the Navajo people are not whole without the remains back where they belong.