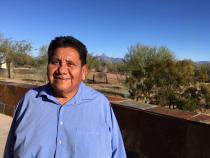 Laurel Morales
Bernard Siquieros is the curator of education at the Tohono O’odham Nation’s Cultural Center and Museum. 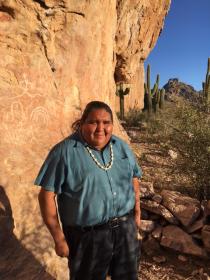 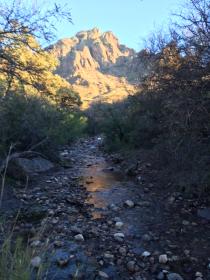 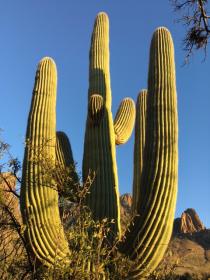 Laurel Morales
The Tohono O'odham tell a story about the saguaro. Vice Chairman Verlon Jose says every living thing has a story and every story, a teaching. 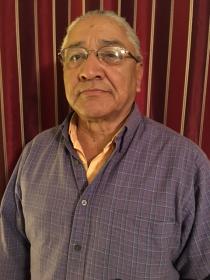 Laurel Morales
For many years Mike Wilson has refilled water barrels across the Tohono O'odham Nation for border crossers. He says the sheer numbers have overwhelmed the tribe.

President Donald Trump has signed an executive order to build a wall along the 2,000-mile-long U.S.-Mexico border. He remains resolute, despite the obstacles that stand in his way. One is the Tohono O’odham, the American Indian tribe that straddles the two countries. Tribal leaders say a wall would desecrate land they believe to be sacred.

Vice Chairman of the Tohono O’odham Nation Verlon Jose drove down a bumpy dirt road on a recent sunny afternoon.

“We have the beautiful surrounding of the Sonoran desert,” Jose said. “We call it Tohono. It means desert. Our name is Tohono O’odham. Tohono is desert. O’odham is people.”

Jose pointed to the palo verde, saguaro, mesquite and prickly-pear cactus. Every living thing has a story, and each story comes with a teaching, Jose said, as he passed by horses, a coyote and a brave jackrabbit that crossed in front of the truck.

“And I always tell people that every stick and stone is sacred,” Jose said. “The rocks that you see along the road have meaning. Sometimes you refer to them as the grandfathers, the grandparents the rocks ...They have a spirit just as well.”

Jose drove to the holiest of rocks Baboquivari Peak. The Tohono O’odham believe their creator lives there.

When it comes to the the president’s plan to build a wall across the mountain range, Jose said, “Over my dead body will we build a wall. It’s like me going into your home and saying ‘You know what, I believe in order to protect your house we need some adjusting.' You’re going to say, ‘Wait a minute. Who are you to come into my house and tell me how to protect my home?’ And you’d probably tell me, ‘Get out of my house.’ Now we’re not saying get out ... We asked for assistance in securing the border.”

Jose said they’re asking the Trump administration to collaborate with the tribe.

“We’re not your enemy,” Jose said. “We’re your ally. We want to work with you in protecting America.”

Picture Rock is a giant wall of petroglyphs created by Jose's prehistoric ancestors, the Hohokam.

“I see plants,” Jose said. “I see animals. I see trees. There’s the sun. See the sun? Yeah, so this is Picture Rock.”

Not far from Picture Rock, Jose parked his truck beside a stream at the base of Baboquivari. He used to visit every month but said he’s been too busy lately. He lifted his face to the peak.

“We’ve gotta acknowledge our creator,” Jose said. “Our creator up above, we give thanks for everything you have bestowed upon us. Creator, thank you for our visitors. Give 'em wisdom and knowledge that they may understand our way of life and why it’s such an important to protect our sacred sites. I ask you to help us to understand each other so that we may respect one another.”

Jose pointed to a cave about halfway up the mountain where the Tohono O’odham make offerings, usually tobacco or cornmeal. In return they ask their creator I’itoi to watch over them, to protect them from drought, invaders and disease. Jose warned never go there with negative thoughts or the mountain will swallow you whole.

Instead he decided to drive to the tribe’s cultural center. They built the lavish museum a decade ago with casino revenue.

Aside from the school and a few government buildings the reservation is dirt roads, simple concrete block homes, Catholic missions and an occasional basketball court.

Tohono O’odham’s ancestral land was once much bigger. It extended down to Sonora, Mexico, and as far north as Phoenix. Of course that was before Mexico and the U.S. went to war and defined their territories.

Bernard Siquieros is the curator of education at the Tohono O’odham Nation’s Cultural Center and Museum.

When the soldiers came, Siquieros said his people sought refuge at Baboquivari, even in the winter when snow fell on the peaks.

"So to escape they walked barefooted along the ridge of the mountain north," Siquieros said. "In those days O’odham didn’t wear shoes. This elder told us there was a trail of blood from the cuts in the feet of these O’odham in the rocks and snow."

Though still the second largest reservation in the country, the Tohono O’odham Nation is much smaller today.

In 1854, the U.S. paid Mexico for what is today southern Arizona and New Mexico. The tribe was never consulted. The Tohono O’odham boundary still runs south of the Mexican border. Tribal members are U.S. citizens who can cross freely into Mexico.

But since Sept. 11 and an inpouring of people from the south, the Tohono O’odham are restricted to one entry point on the reservation or U.S. ports of entry hours away.

Not that long ago the Tohono O’odham welcomed strangers. They were taught by elders to give water, food and shelter to those in need.

“It’s part of our cultural DNA to offer hospitality,” Wilson said. “But when I started putting out water in 2002 you saw the influx, just the sheer numbers. The police department estimated then that there were about 1,500 migrants crossing from Sonora into the Tohono O’odham Nation per day. So those numbers exhausted this tradition of hospitality.”

So many don’t survive the brutal journey through the desert. Police say in 2010 half of Arizona’s migrant deaths occurred on the Tohono O’odham Nation. Wilson said the tribal government has to take some responsibility for that suffering.

“The sanctity of human life is greater than any sacred site,” Wilson said.

The tribe has asked for help from the federal government. And a decade ago they agreed to a vehicle barrier along the border. But it hasn’t prevented people from crossing or dying.

President Trump said his plan to build a wall, to hire 5,000 more federal agents and to triple the number of Immigration and Customs Enforcement agents will stop them.

Many Tohono O’odham worry the increased militarization will turn their homeland into a police state. At this point it’s unclear what power a simple executive order has.

“We’re really in legal limbo and I think that’s a cause of great anxiety for tribal peoples,” said Rob Williams, a professor at University of Arizona’s Indigenous Peoples Law and Policy Program. “We’re not sure what this administration intends to do with executive order, whether it intends to push through this wall with congressional legislation appropriating the land or simply attempting to command Indian nations to cooperate with the federal government.”

If the Tohono O’odham decide to sue the federal government arguing the religious value of their land, then they will be dealing with antiquated laws.

As we wait for the president’s plan to unfold, Vice Chairman Verlon Jose has invited him to Baboquivari. Jose believes only then, when sitting amidst the army of Saguaros and the creator I’itoi, will the president understand he needs to work with the tribe.