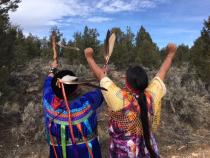 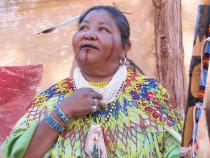 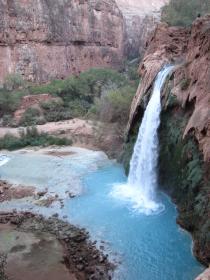 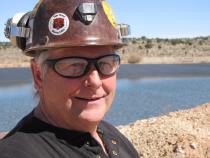 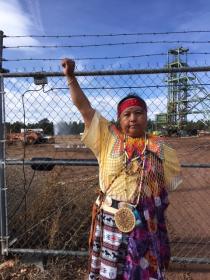 Before the time of dinosaurs, lava cooled on this spot. Over millions of years the land around it eroded away. What remains is Red Butte. The Havasupai liken the steep red hill to a mother’s pregnant belly. They believe their tribe emerged from this place.

“We are birthed here,” said Dianna Baby Sue White Dove Uqualla, a Havasupai elder. “We come from underground ... this is our sacred home. Still this is part of our traditional homelands.”

On a recent chilly day, Uqualla and fellow Havasupai elder, Coleen Kaska, sang a prayer song to the mother. Uqualla waved eagle and condor feathers over burning sage. It’s a private, rare ceremony for a non-Native person to witness.

The women were dressed for ceremony. Uqualla wore a cobalt blue dress the color of the desert sky. It’s trimmed with orange, green and turquoise ribbons. She painted red lines from her eyes to her chin using the ochre of the Grand Canyon. She said the lines represent the tears she cries for all human suffering.

“I still cry for my people of this world, the land, everything upon this world, because it hasn’t gotten well yet,” Uqualla said. “So these are the marks that I wear. When I see peace love, respect, dignity come back into this world, then I will erase these marks.”

In 1300 A.D. Uqualla ’s ancestors made their home in and around Grand Canyon. They spent their winters on the plateau hunting and gathering. In the warmer months they moved down below the rim and grew corn, beans and squash on the canyon floor. After the Grand Canyon was designated a national park almost a century ago, the federal government forced the Havasupai to live on a small patch of land in a side canyon known today as Supai Village.

“This became a permanent home, this canyon home when we used it only in the summers,” Uqualla said.

Havasu Canyon is home to three of the most photographed waterfalls in the world. Havasupai means “people of the blue-green water.”

Today, the tribe relies on tourism to sustain their people — tourists like myself and a couple friends who visit Uqualla at her summer home down in the canyon.

There are three ways to get to Supai Village — by foot, by helicopter or by mule. We chose to walk the trail on a cold but sunny November morning.

A dozen mules made their way out of the canyon as we hoof it down the switchbacks. Visitors learn quickly to listen for the herd’s thundering hooves and get out of the way pronto. Nothing stops a mule train.

It’s a 10-mile hike to the majestic waterfalls for which Havasu Canyon is known.

Before you reach the falls, visitors must walk through Supai Village, where about 400 tribal members live.

Just beyond the helicopter landing Uqualla waited at her home.

“This whole canyon is sacred, so I honor each and every one of you for walking and touching my ancestors,” Uqualla said.

“This place here has been taken away from my people so we would forget about it,” Kaska said. “We’ve been oppressed, but oppression can make a people strong and that’s the reason why we are still here.”

In the 1980s mining companies discovered the land surrounding Grand Canyon to be rich in uranium. And the industry boomed.

“Every single mining site in this area, the closer we look, the more contamination we find,” Clark said. “If groundwater is contaminated by these deep uranium mines, it’s really impossible to reverse that contamination.”

In 2012, the Obama administration banned new mining claims on 1 million acres surrounding Grand Canyon National Park. It was a temporary ban so scientists could study uranium’s impacts on the watershed.

But four mines were grandfathered in before the 20-year moratorium. And one of those is five miles north of Red Butte where miners “sink shaft," or dig a super deep hole, as they get ready to blast uranium out of the ground.

“It’s probably the cleanest, safest energy we have available,” said Donn Pillmore, who oversees Arizona mines for Energy Fuels Resources. “The rest of the world has recognized that and so there’s going to be an ongoing demand for uranium.”

Pillmore gave me a tour of a mine north of Grand Canyon that was recently operating. The entire sight is about the size of a Walmart parking lot, with a 10-story-tall yellow tower, a warehouse and a containment pond. A thousand or more feet below the surface, a couple dozen miners use explosives to blast out the ore.

“That box you see up in the headframe there?” Pillmore said. “That’s the ‘man cage’ that the miners ride up and down into the mine on.”

Underneath the cage, a giant yellow bucket turned upside down and dumped two and a half tons of gray rock. Pillmore stuck a geiger counter into a large pile to measure the radiation level.

“This material right here runs about 10 pounds of uranium per ton of rock,” Pillmore said. “This is about our average grade.”

But environmentalists say that’s a dangerous amount. America’s most famous canyon was carved out by the Colorado River. And that river still provides drinking water for nearly 40 million people.

“By opening up the mine, exposing it to the air to an oxygenated environment makes it that much easier for uranium to migrate out of its hard rock phase into a dissolved phase with water,” said Don Bills, a hydrologist for the U.S. Geological Survey.

Bills said uranium also naturally leaches into springs, so more studies need to be done. And that fuels the debate between the environmentalists and the uranium mining companies.

But Havasupai Medicine Woman Uqualla said the perspective you gain standing on the rim of the Grand Canyon is so great.

“You really wake up and understand that you’re only a small piece of this world,” Uqualla said.

EDITOR'S NOTE: This story has been modified to correct when the Grand Canyon was designated a national park.