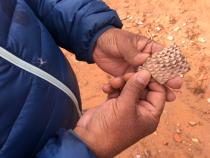 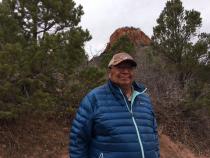 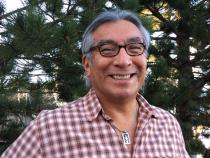 Laurel Morales
Jim Enote is a farmer and a director of the A:shiwi A:wan Museum and Heritage Center in New Mexico. 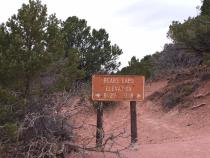 On one of former President Barack Obama’s last days in office he used his authority under the Antiquities Act to protect 1.35 million acres surrounding a pair of buttes in southern Utah called Bears Ears.

While some tribal leaders are celebrating the monument designation, many Utahns, including some Navajos, are protesting. And some lawmakers are now lobbying for President Donald Trump to reverse the designation under the rallying cry of “Trump the monument.”

On a recent windy day in southern Utah, a snowy fog lifts to reveal an enchanting landscape — red rock spires, hoodoos, stone arches and towering pinnacles. It’s no wonder this place is called the Valley of the Gods.

This land is protected under an executive order, but if some members of Congress have their way, it won’t be. And under federal statute, this land, where the Anasazi people lived before the time of Christ, could legally be sold.

“We’re right in the middle of the two buttes, it’s like a door right there,” Yellowman said. That’s our connection. We talk to nature, that’s the doorway right there. When we say Bears Ears he listens to us. These trees … you make an offering you put your hand on it like that. You talk to it.”

Yellowman holds the branch of a juniper tree as if he’s shaking hands with it.

“I want to be strong like you,” Yellowman said. “You stand throughout the winters. We talk to these trees. When the breeze comes through they talk to us. Sometimes when you’re by yourself you can feel something over here. You can hear something, sometimes you look over there. You can hear it too. It’s like a shrine out here it’s a holy place.”

At the end of a windy unmarked trail Yellowman picks up a piece of Anasazi pottery on the ground.

“So as you walk around you’ll find something everywhere,” Yellowman said.

Bears Ears is rich with such artifacts, rock art and cliff dwellings. There are more than 100,000 archaeological sites. That’s one of the reasons Obama decided to protect it.

Jim Enote is a farmer and a director of a Zuni museum and heritage center. He said Bears Ears contains a library of knowledge.

Enote remembered a recent visit when he came across an old village. He made offerings, much like people would at a cemetery with flowers. Then he noticed someone had carved into the petroglyphs and dug into a dwelling wall.

“How could anybody do something like that?” Enote said. “We wouldn’t do that at a cemetery, of course not. If people are able to respect places like cemeteries, or war memorials, or war battlefields, places that are sacred to many people, why can’t they afford us the same kind of respect and civility?”

She can see Bears Ears from her backyard.

The town of about 3,700 is mostly made up of Mormons who settled here after they were chased out of Mexico for polygamy.

Hurst and many of her neighbors don’t want a national monument. They worry their farming and ranching land will be taken away. If you look at Blanding on a map you’ll see it’s surrounded by public land.

“I’m afraid that making it a monument takes it away from us, makes it so much less accessible to the regular people,” Hurst said.

Many in Blanding don’t trust the federal government. Twice the FBI decided to crack down on the community for selling stolen artifacts. The feds raided 16 homes and trading posts in the mid-1980s. Then two decades later, they came back.

Down the street from her home, Hurst points out three of her neighbors’ homes, where arrests were made.

“They all had guns drawn and I thought, 'What in the heck is going on here?'” Hurst said. “I thought it was unconscionable. They’re in their 70s.”

The FBI arrested more than two dozen people, including the town doctor, Jim Redd, and his wife Jeannie. The judge told Jeannie she faced up to 35 years in prison, if convicted. The day after the Redds were released from custody, Jim Redd committed suicide.

“He delivered half my kids,” Hurst said.

Two other people involved in the raid also killed themselves. Many people believe when you take a sacred artifact, you’re cursed.

“The town was heartbroken and broken period,” Lyman said.

Lyman was arrested recently, too. Not for pot hunting, but for leading an ATV ride in protest of a federal government plan to shut down a county road leading to federal land.

Lyman said the Bureau of Land Management gave him permission to do the ride.

“I’ve never tried to exceed my defined authority,” Lyman said. “And I wish the federal government could say the same thing because they are constantly pushing the bounds of their jurisdiction, their authority, their legal reach.”

Lyman and his colleague Rebecca Benally, who is Navajo, have fought the monument designation, saying local leaders should manage this land.

“How dare these special interest groups speak for us as if we can’t speak for ourselves?” Benally said. “We depend on these lands for our living, our worship and our cultural traditions. We do not support any movement to convert our sacred lands to a monument that will ultimately be controlled by bureaucrats who is totally out of touch with our history and our way of life.”

Many Utah Navajos feared they won’t be allowed access to the monument to chop wood or gather medicinal plants. But Obama, in his proclamation, calls for an advisory group made up of local leaders and a tribal commission to help federal officials manage the monument.

Still Benally is not convinced.

“We should not be so quick to believe these promises,” Benally said.

For years Republican lawmakers have tried to gut the 1906 Antiquities Act, but never had enough support behind the effort.

John Leshy is professor emeritus of law at the University of California-Hastings. He said there’s a whole new political landscape to consider now with Republican control of Congress and the White House.

“Bottom line is Congress can do whatever it wants to. Congress can rescind the monument proclamation,” Leshy said. “Congress can sell off all the lands if it wants to by simple statute. There’s nothing in the constitution that protects those lands. But we’ll see.”

Leshy said for Congress to be tinkering with a law that’s protected so many national treasures is politically risky.