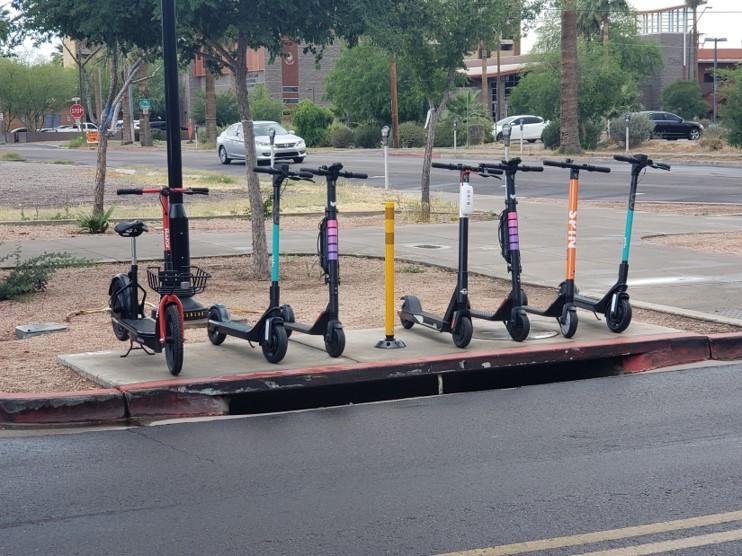 City of Phoenix
Around 1,800 of these could be scooting on downtown Phoenix streets in fall 2019.

MARK BRODIE: Electric scooters will soon be available in downtown Phoenix. The City Council has approved a six-month pilot program for e-scooters. It's expected to start in mid-September. Companies taking part will be allowed up to 300 scooters each and will have to apply for city permits to take part and riders will be limited to an area of downtown. At the end of the six months, the city's Street Transportation Department will recommend to the council whether to try another pilot program, make the program permanent or let it end. With me to talk more about this is Michael Cano, a traffic engineer for the City of Phoenix and lead for its e-scooter program. And Michael are the companies so far that have expressed interest in renting scooters to Phoenix riders?

MICHAEL CANO: Yes,... there is about six to seven potential vendors that's been involved in developing this process. They... actually helped us assist with public outreach. We reached out to 10 neighborhood associations to,... just kind of get them to know that this pilot program is coming. We're developing rules and regulations. These are the ideas that we have and it was their time to actually provide input.

BRODIE: Now I know you've gotten input from a lot of different stakeholders and I want to hear about what you heard from some of them. First off, I'm curious about people who live and work and sort of spend time in downtown. I would imagine that there's a good number of them who are really eager to have these kinds of devices around?

BRODIE: From whom did you hear concerns? I mean, who was nervous about what this might be and who is sort of really interested in for example, not riding them on sidewalks or having a cap on them or having geographic limits or... how fast they could go?

CANO: So, we were lucky to have the voice of the neighborhood. And yes, we have some neighbors or residents that are definitely for it and other neighbors that maybe did have some concerns. So, definitely riding on the sidewalk; we feel that prohibiting the riding on the sidewalk would be best. So, it's all visual blight as well. So that's some of the feedback that we got that, you know, they didn't want the scooters just lying around, something that they were concerned about and also safety.  So how are we actually going to convey the safety message to the riders?

BRODIE: How does what Phoenix is doing relate to what some of your neighbors are doing, in terms of other Valley cities and how they're handling, be it, bike share, scooter share, whatever else the new technology might be coming forward?

CANO: Right, so the City of Phoenix is a member of the National Association of City Transportation Officials, NACTO. And they definitely have an influence on shared micro mobility. But we also have our unique program, that might be different from say the City of Tempe or Scottsdale or maybe another major city. So one of the major differences that, it's going to be a permit process and how we review their application might be different. The other big, I would say unique, requirement is parking. So we're gonna have parking approved designations, that we're going to actually designate parking locations within the boundary area and they're gonna be delineated. And the scooter companies need to deploy their scooters on these designated parking locations. And riders.. need to also, in the ride and park at these designated location. So it's basically like a virtual hub.

BRODIE: Is it difficult, I guess, to get that word out to riders? For example, that you know if you're riding it a restaurant you can't just, for example, leave it outside when you walk in. And I'm wondering if, the companies themselves bristled at all at some of the regulations that you're putting in place.

CANO: Well, I think this market is changing, it's evolving. And so, a year ago they might have been really reluctant to have something like a kind of a dock, or virtual dock system. But I think they've realize that they need to change with the demands of the city. And there is a way for the city to help with say some of the concerns from the public, like visual blight. And also, to help maintain the city streets and the public right of way.

CANO: So, we want to look at the demand, to see the demand trends. Is it going to be just a novelty for the first three months and then taper off? Or is going to have a steady increase in demand or ridership? So, we also want to know where most users are going to start and end their trip. So, if it's pushing towards the northern limits or even it's spread out through the boundary area, then that's something that we could kind of plan for maybe different facilities, like bike facilities. Or some how we might need to change the parking... locations. So, that's something that we're looking forward to. So, we wanted to see where people are going to go or want to go.

BRODIE: Are there metrics in place, in terms of trying to figure out, once the six month period is over, that yes, we should keep it going as it is, we should do a full on let scooters in everywhere, we should maybe, mildly expand the boundaries, we should just not have them at all?

CANO: We definitely, with looking at trends and where the rides... will end, that is just one metric. The other metric is incident compared to trips. We want to look at that, to say we want to make that, compare that to say to other cities that are our size as well.

CANO: Right, so some type of collision, that it could be minor or any other incident problems, you know. Is it incidents with just the vehicle itself?

BRODIE: All right, Michael thanks a lot for coming in.

CANO: Oh you're welcome, it's my pleasure.

BRODIE: Michael Cano is a traffic engineer for the City of Phoenix and the lead for the city's e-scooter program. 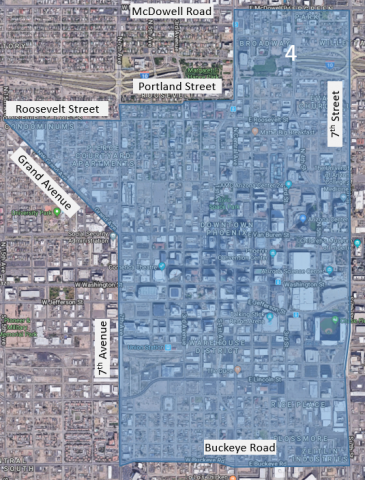 City of Phoenix
E-scooters will be limited to a section of downtown Phoenix.