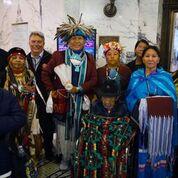 In the first case, lawyers for the Havasupai Tribe and conservation groups argued a mining company needs to evaluate potential environmental and cultural impacts on the land before reopening a mine six miles south of the park.

The Havasupai consider the land sacred and wanted the Forest Service to consult with them before permitting the mine.

The mining company Energy Fuels Resources was greenlit to mine the area back in the 1980s. Attorney Neil Levine argued much has changed since then.

“Because the world changed in 2012 when the lands that were subject to the mining law were withdrawn by the secretary,” Levine said.

So it will be up to the judges to determine whether the mining company has valid and existing rights to mine there today.

In the second case the National Mining Association challenged the 20-year withdrawal of new mining claims.

Attorneys argued the Interior Secretary didn’t have the authority without Congress’ consent to issue the ban in 2012.

A U.S. District Court in Arizona has upheld the ban in two rulings.