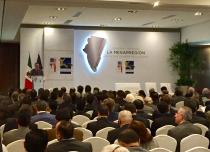 Rodrigo Cervantes
Juan Pablo Castañón, president of the Mexico's largest business organization, was among the keynote speakers of the first day at the Hermosillo convention.

Hermosillo - People and businesses from Arizona and Sonora, Mexico, have forged longtime commercial and cultural ties.

That’s the reason why both states keep putting together meetings - like the one held right now in Hermosillo - where business people, politicians and representatives from other sectors work to strengthen their alliances.

On Thursday, business and government representatives from Arizona and the Mexican state of Sonora held their first day of meetings in their annual summit in Sonora’s capital city.

They call the Arizona-Sonora area “the megaregion," a region that was praised by some of the guest speakers at the event.

Juan Pablo Castañón, president of Mexico´s largest business organization, said that this area is an example of productivity that should be followed by other regions.

Emilio Cadena, a Mexican businessman and one of the panelists, considered that it is time to think more about “border-lands” than “border-lines." The region, he said, grows economically and culturally, regardless of any federal trade agreement.

Around 500 hundred people are attending the Arizona-Sonora meeting in Hermosillo. The event will end Friday.