Democratic National Committee Chair Tom Perez spoke in the Valley today to rally support for the Affordable Care Act. He was joined by two Arizona representatives, an ER doctor and the father of a son with pre-existing conditions.

"Your governor purports to be a business leader, who wants to run government like a business? No one would leave this kind of money on the table, that he wants to leave on the table. The business case for Medicaid expansion is compelling," Perez said.

Democrats successfully ran in defense of the healthcare law in 2018. If the court of appeals upholds the unconstitutional ruling, the fight would move to the Supreme Court and could be the centerpoint of a Democratic voter rally defending the ACA into 2020.

The Fifth Circuit Court of Appeals in Louisiana is hearing oral arguments on whether the ACA is unconstitutional.

That lawsuit is supported by Arizona’s own Attorney General Mark Brnovich, along with 19 other attorneys general.

Perez said even if the Fifth Circuit rejects the ruling calling the ACA unconstitutional, the current administration should work to make the Act better.

“I know what the administration should do. Which is to enforce and implement the Affordable Care Act. Was it perfect, no. What they have done, time and time again, is to sabotage it," he said.

If the lawsuit ultimately is successful in arguing Obamacare as unconstitutional, almost 300,000 Arizonans would lose insurance coverage. 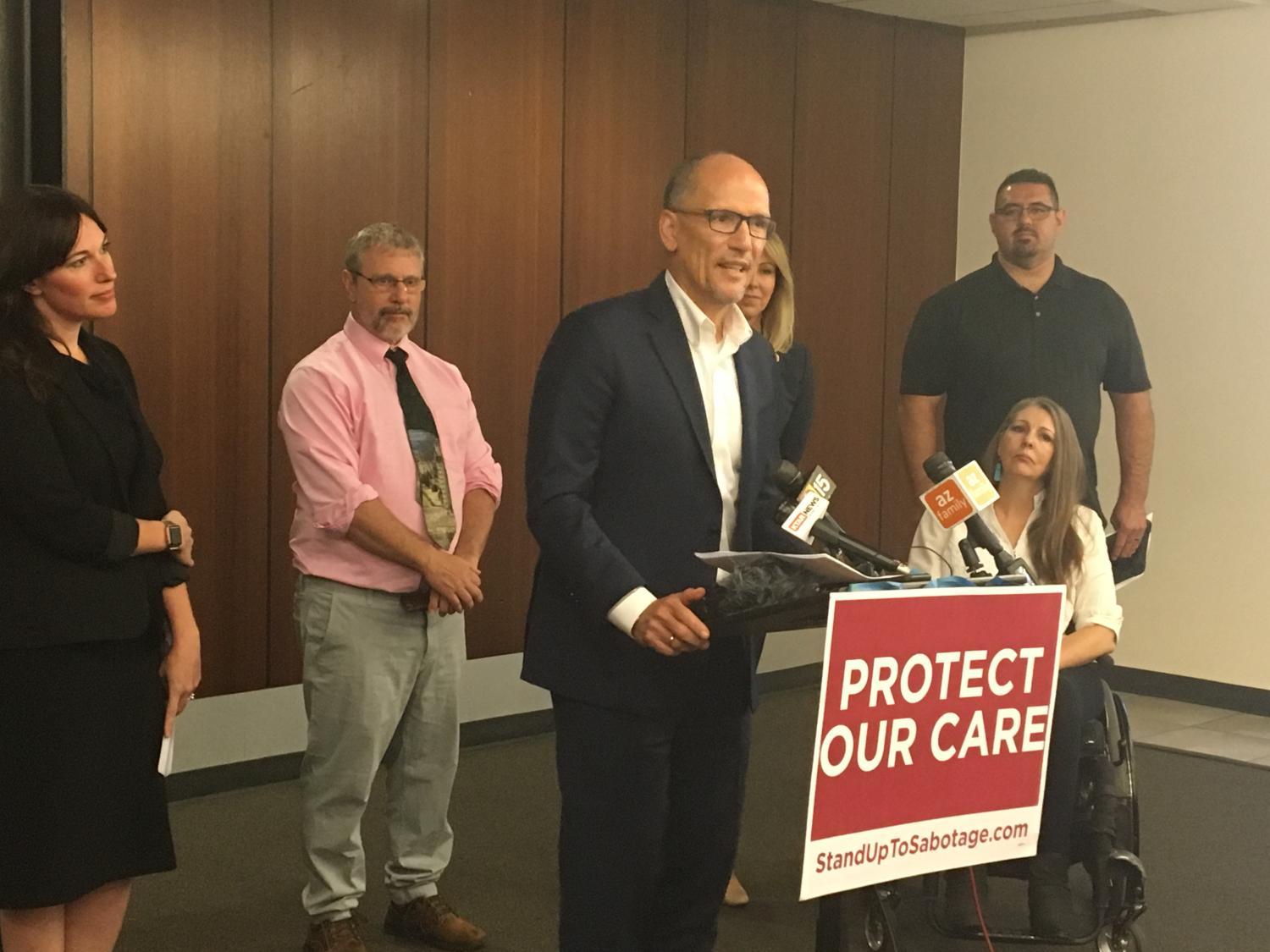 LAUREN GILGER: The battle over the Affordable Care Act is not over yet. A federal appeals court has taken up a Texas case challenging the ACA, one in which a lower court already ruled the law unconstitutional. Arizona Attorney General Mark Brnovich joined that case in 2018, and this morning Democratic National Committee Chairman Tom Perez is in Phoenix to rally for the ACA, and KJZZ's Casey Kuhn is there now with a quick preview. Good morning, Casey.

GILGER: So give us a quick scene-setter. Who's on the roster? Who are you expecting to hear from at this rally?

KUHN: Right so we're at the Ability 360 conference center over on Washington in Phoenix. And we're about to hear from — like you said — the chair Tom Perez, Rep. Kelli Butler, Rep. Jennifer Longdon and a few other Affordable Care Act proponents, all here to talk about what the ACA means for Arizona.

GILGER: Right. And what is their message? I mean, this would mean a massive overhaul of the health care system as we know it. What are they saying this would do?

KUHN: Right, so it's kind of a big "if" right now. If the court upholds this ruling, it still needs to go to the Supreme Court. The message today is how many Arizonans would be affected if the ACA were to go away. Just to drum up support of this act and support of how many people here do benefit from the ACA.

GILGER: So Democrats really campaigned on health care in 2018, and that did pretty well for them in terms of the results of that election. Is this sort of a blessing from their point of view? Are they seeing this as an opportunity to campaign on health care once again?

KUHN: Yeah. It definitely feels like a campaign. You know, there's signs, and it's clearly aimed to drum up support through the press. And according to them, more than 2 million Arizonans — if ACA were to go away — more than 2 million Arizonans with pre-existing conditions would lose protections. Almost 300,000 would lose coverage. So they're talking about this now because we're kind of on the lead up to 2020, and people are saying that this has been successful for Democrats in the past. So it could be a good lead up to campaigning in 2020.

GILGER: All right. That's KJZZ's Casey Kuhn checking in with us from a pro-ACA rally happening in Phoenix right now. Casey, thanks for the info.