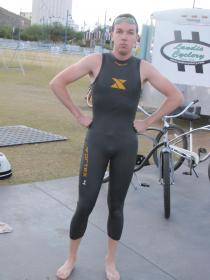 (Photo by Mark Brodie-KJZZ)
Nick poses before the challenge begins.

KJZZ's own Nick Blumberg recently competed in a charity triathlon, a massive athletic undertaking that comprised 1/100th of an Ironman. Don't act like you're not impressed.

[Nick's note: It's really worth clicking play and listening to the audio version of this story as you read. Promise.]

MARK BRODIE: When you think of the pinnacle of athletic achievement, you probably do not think about public radio journalists.

NICK BLUMBERG: Well, you maybe you should!

MARK: Mmm...no, probably not. I’m here with KJZZ’s Nick Blumberg, who a couple days ago became an Ironman. Or at least, 1/100th of an Ironman. Nick, would you like to explain the Ironman Media Challenge?

NICK: It’s a charity event hosted by the City of Tempe for members of the local media and city government. The organizers of the real Ironman, which happens this weekend, donate $1,000 to a charity chosen by the winner. I swam 24 yards in Tempe Town Lake, biked 1.12 miles and ran .26 miles.

MARK: And you didn’t attempt this massive athletic feat cold, did you?

NICK: Nope, I enlisted the help of an expert at a training session Tuesday morning.

STACY BERTINELLI: I’m Stacy Bertinelli, not an expert triathlete, but not afraid to get in Tempe Town Lake.

NICK: Okay, what are we going to do out here this morning?

STACY: We’re going to introduce you to the joys of open-water swimming! And also get you into a wetsuit, which could be a challenge since mine is a ladies’ large. One thing you should know, Nick, the reason why I think it might fit you is, I compete not in my age group in triathlons but in my weight class. I try to be the fastest of fattest! I bet I might outweigh you, which is why you might fit in my wetsuit.

NICK: We successfully squeezed me into Stacy’s wetsuit and jumped in the water. After the swim I got some practice with the bike and the sprint, and I asked my trainer to record her thoughts for posterity.

STACY: Nick did good in the water. He was quite the trooper. I don’t think he actually put his head under at all, which is okay, because it’s a little scary in Tempe Town Lake. He’s going to do great tomorrow. I’m not sure if any of the other members of the media have trained as much or as intensely for this 1/100th of an Ironman competition as Nick.

MARK: Sorry. How you feeling?

NICK: Based on my level of soreness this morning, I’m starting to feel like it would have been a good idea to train five days ago instead of yesterday.

MARK: But no competition can truly scare the intrepid Nick Blumberg. Although as it turns out, you might not have been as prepared as we thought.

NICK: Yeah, some of my competitors had done triathlons and marathons and who like swimming. But I never turn back from a challenge, so just like Stacy and I practiced, I wetsuited up and dove right in.

MARK: How did the swim feel?

NICK: I was unstoppable! I had the speed of Ryan Lochte, with a vastly expanded vocabulary. The agility of Michael Phelps, without the affinity for cannabis.

MARK: I’m not so sure your actual performance lived up to either of their standards.

NICK: Maybe not, but I did meet one important metric, as Stacy pointed out during the race...

NICK: During the bike portion, I passed a couple people, which had me feeling like there might be a comeback in the works.

NICK: But, for basically the first time in my entire life, I failed.

MARK: So, what happened out there?

NICK: Well, I didn’t, um, technically win. In my heart I’m a winner, which I think is what counts. I finished, seventh? Eighth? I was doing better on the run, but I got overtaken by a guy who recently finished the Chicago Marathon, so I don’t feel so bad.

MARK: You looked good in the wetsuit.

NICK: Thank you, I appreciate that. I wear that on the weekends.

See a slideshow of Nick's time during the Ironman challenge.