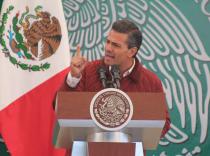 Mexican President Enrique Peña Nieto said he plans to meet with President-elect Donald Trump in the next few weeks.

Peña Nieto called Trump to congratulate him on his victory. They agreed to meet, but did not talk about Trump’s plans to build a wall on the border.

Claudia Ruiz Massieu, secretary of foreign affairs of Mexico, said that the Mexican government will take Trump’s promise of a new era of cooperation.

Mexican Secretary of Economy Ildefonso Guajardo said they will discuss NAFTA with Trump’s team to clarify the importance of the agreement but not to renegotiate it.