Buckle Up: 5 Years Of Phoenix Road Construction Ahead 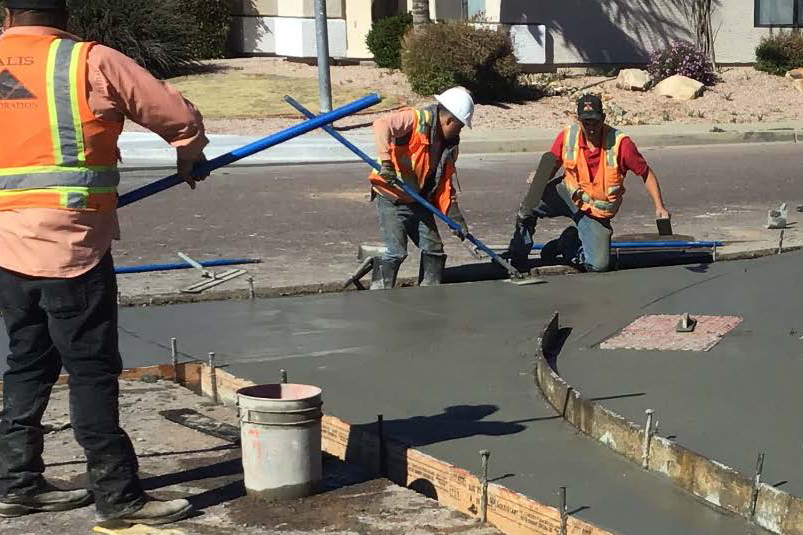 City of Phoenix
Repaving in Phoenix.

Expect to see more road construction in Phoenix over the next few years. The City Council recently approved an accelerated pavement maintenance program.

The plan calls for Phoenix to triple the number of street miles in its pavement maintenance program over the next five years. During a June 25 council policy session, Street Transportation Director Kini Knudson described how a specially designed van helps create the repair list.

"This van is equipped with cameras, sensors and equipment that help scan, measure and record our city streets," he said. "Then, we go back and we look at that data and effectively try to figure out where the streets are in worse condition and which ones need to be maintained.”

He said they also rely on community input. On average, Phoenix paves 16 major street miles per year. This program will boost that to about 50 per year for a total of 250 major street miles. In addition, Phoenix said another 200 street miles — including major and minor streets or roads — will receive other forms of maintenance like sealing cracks. 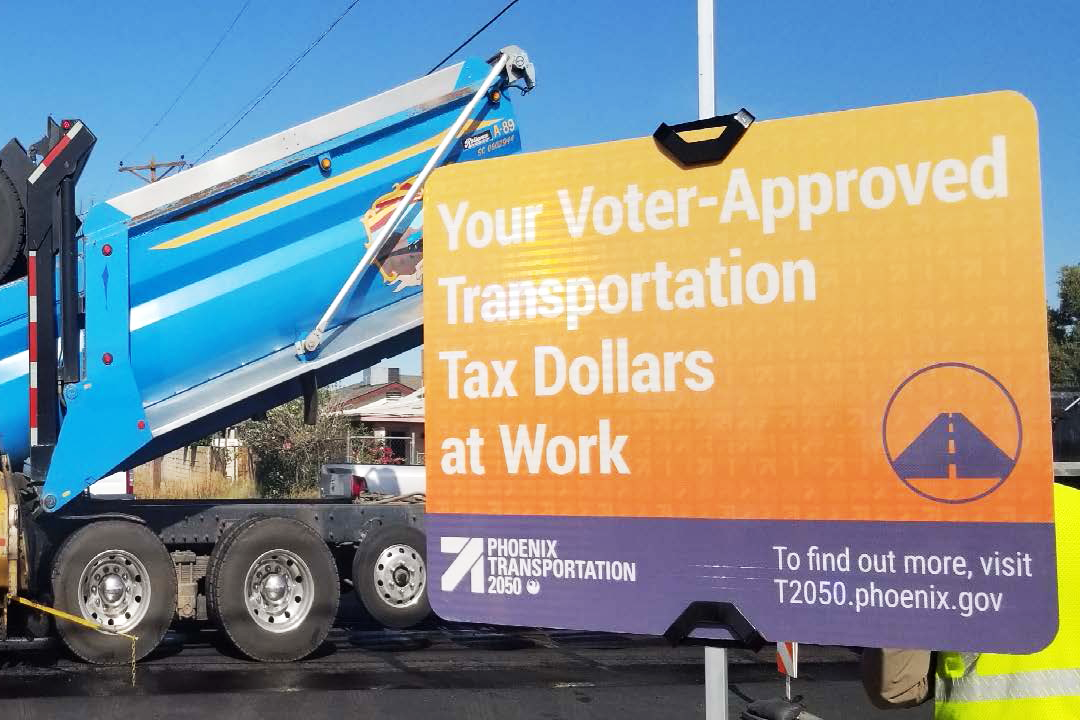 Residents and business owners can check out specific areas or projects through an interactive dashboard on the Street Transportation Department’s website.

How Bad Are Phoenix Streets?

There’s a measurement the industry uses called a Pavement Condition Index or PCI. It’s measured on a scale of zero to 100 with 100 being the best.

To be considered in good condition, a street must have a minimum PCI of 70. In Phoenix, only about 30% of roads are considered good or excellent. That means 70% of streets are considered fair, poor or very poor. That’s more than 4,800 miles of streets.

The Street Transportation Department crunched numbers and said to get all Phoenix streets in good condition would cost $1.6 billion. 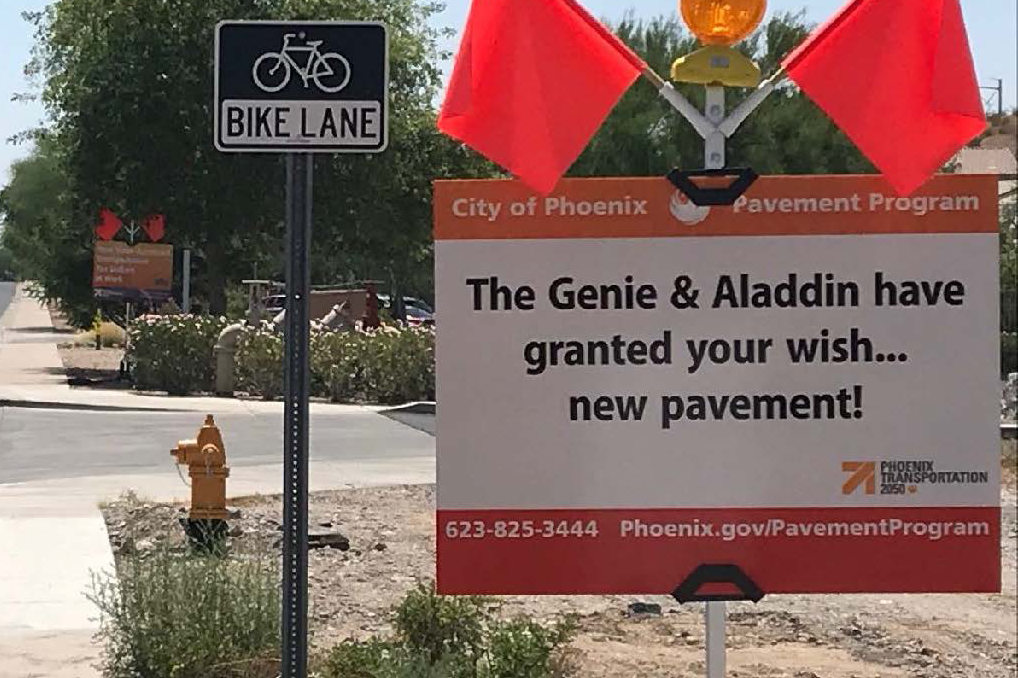 City of Phoeinx
The city of Phoenix decided to have some fun with the pavement signs.

While leaders think most people will be happy to hear streets are getting more attention, the city is aware no one likes getting stuck because of road work, so they’re really focused on messaging. You may come across signs that say, “Your voter approved transportation tax dollars at work”.

Phoenix also came up with more creative messages. Through an in-house shop, city workers made 20 signs to raise awareness about the program in a fun way.

There’s a sign that reads “Forget Winter ... Paving is Coming,” a nod to the HBO series "Game of Thrones." There’s also a sign telling drivers the new pavement will take them “To Infinity and Beyond,” a catchphrase from the "Toy Story." And, there’s a sign with a Star Wars reference: “This is no Jedi mind trick. This is the new pavement you were looking for.”

Unfortunately, someone swiped the Star Wars sign off Liberty Lane in Ahwatukee. The Street Transportation Department is asking anyone with information about where the sign may be to send tips to [email protected].

More serious messaging will appear over the next eight weeks.

In late August, voters will decide whether to kill future light rail projects. Many of the people who led the ballot initiative want to see more money spent on streets and other transportation projects. the mayor and the majority of the council support light rail and realize next month’s election is critical. They’ll be reminding voters that the city’s listening to them and spending money on streets, too. 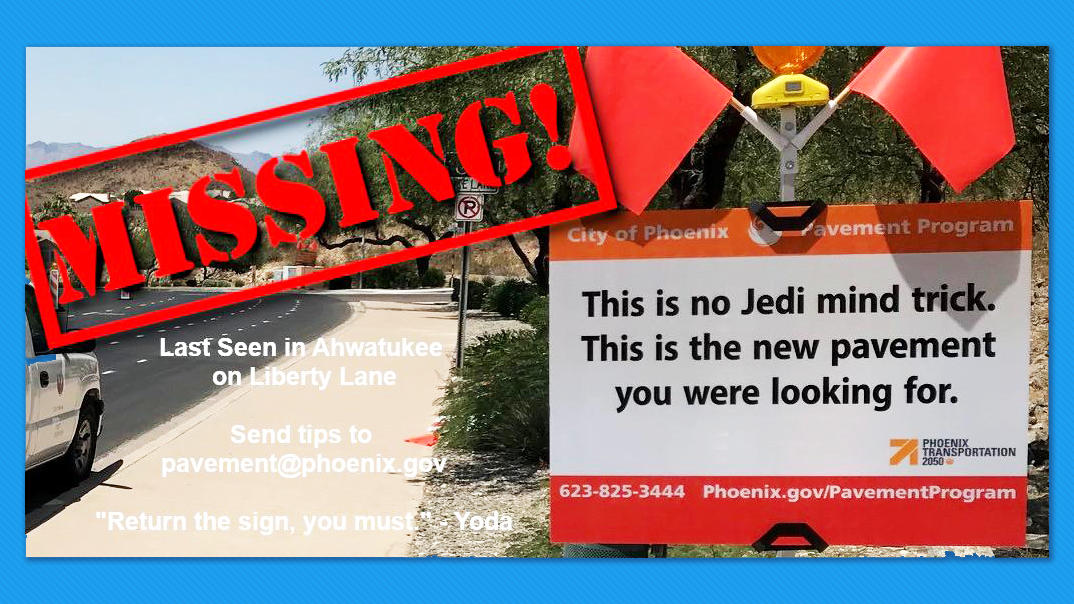 City of Phoenix
One sign was recently stolen, and Phoenix made a callout on Twitter asking for its return.
BusinessThe Show