US Investors, Tourists Could Benefit From 'Cheap' Mexican Peso

US Investors, Tourists Could Benefit From 'Cheap' Mexican Peso 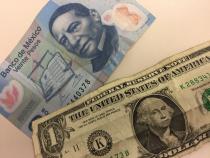 Rodrigo Cervantes
As the peso is getting cheaper, the price of Mexican goods and services is relatively stable since the Central Bank of Mexico has restrained the inflation.

MEXICO CITY — The value of the Mexican peso is continuing to slide against the American dollar, which be good news for American tourists, importers and investors.

In one Mexican bank — BBVA Bancomer — the currency crossed a major psychological barrier Monday: 20 pesos per dollar. That’s only one bank, but it’s a benchmark.

Juan Carlos Orozco, head financial analyst with Mexico’s Grupo Reforma, says that the price of the peso nowadays is impacted by the price of oil. But, he said the recent surge is due largely to expectations from a Fed meeting scheduled for Wednesday.

Many economists expect the Fed to meet this week and raise its interest rates, Orozco said. This means investors could have an incentive to move their money from Mexico to the United States.

“The typical way to think about this situation is that the dollars [from the investors] will go back to the Unites States,” Orozco said.

And although the Mexican peso is volatile, it is also strong compared to other currencies. In fact, it’s the second most traded currency in emerging markets, after the Chinese Yuan, explains Leticia Armenta, an economics professor at Monterrey Tech University in Mexico City.

“At the end of the day, the Mexican peso has huge acceptance in the world for trade,” Armenta said. “It is commonly used to triangulate operations in other markets; not necessarily in Mexico.”

And as the peso is getting cheaper, the price of Mexican goods and services is relatively stable since the Central Bank of Mexico has restrained the inflation.

In general, this means that, as prices in Mexico stay almost untouched, the dollar gains a stronger buying power. So this is most likely a good moment for American tourists, importers and investors.