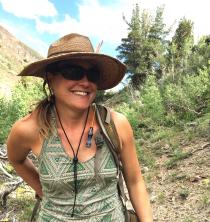 Betsy Harter
Betsy Harter is a guide in the Grand Canyon with Arizona Raft Adventures.

In the dog days of summer in Arizona, many people escape the heat for a float down the river. Most return home with a good story. In Flagstaff, river guides often take great pride in the craft of weaving a good yarn.

In our series, "Arizona River Stories," we'll hear tales from five of these storytellers.

Betsy Harter has been guiding for 16 years, including in the Grand Canyon for Arizona Raft Adventures. But some of her most memorable moments came early in her career guiding canoe trips in Costa Rica.

On one trip, her boss decided to take a group of passengers down the Rio Sierpe deep in the jungle. The guests were less than happy after running into nasty creatures on the water, including hornets and crocodiles.

Read more from this series: