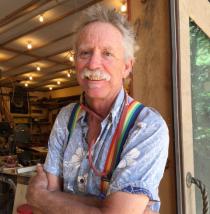 In the dog days of summer in Arizona, many people escape the heat for a float down the river. Most return home with a good story. In Flagstaff, river guides often take great pride in the craft of weaving a good yarn.

In our series, "Arizona River Stories," we'll hear tales from five of these storytellers.

Boatman Brad Dimock has told the story of honeymooners Glen and Bessie Hyde on countless Grand Canyon river trips. So many times in fact that he decided to research and write a book about them.

In 1928 the young couple built a boat called a sweep scow and took it down the Colorado River from central Utah for their honeymoon. They never made it to their end point, vanishing without a trace. Or had they? Dimock dug into the mystery in his book "Sunk Without a Sound."

Read more from this series: