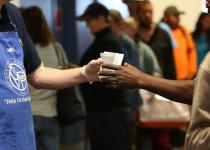 When St. Vincent de Paul Chief Program Officer Jessica Berg makes the short walk from her car to her office, she can’t help but think of those that have no choice but to endure the triple-digit temperatures all day and all night this summer. That’s why the organization announced extended hours for three of its dining rooms across the Valley and its resource center.

“There are so many folks that just don't have anything, and it is absolutely life threatening for people this summer,” Berg said.

The locations with extended hours include Sunnyslope, Mesa and downtown Phoenix. Since extending its hours earlier this month, Berg said St. Vincent de Paul has provided more than 2,500 overnight stays, and 50 to 80 additional people per day seek shelter in one of its dining halls.

There were more than 180 heat-related deaths in the Valley last year. Berg said that the organization does not mind the additional costs for utilities and personnel from the extended hours if it means saving lives.

“I've never worked for an organization where people are just so grateful to be of service,” Berg said.  “It's challenging, but I think St. Vincent de Paul really thrives on the opportunity of the challenge.”