Sonoran Arcana: The Latest In The Journey To Find Arizona's Cuisine — Tepary Beans

LAUREN GILGER: OK Mark, so now it is time for the next edition of Sonoran Arcana. So this is our series that seeks to define Arizona food with Phoenix New Times food critic Chris Malloy.

MARK BRODIE: So what yummy food do you get to have this month, Lauren?

GILGER: Such attitude, there. You're jealous.

BRODIE: I am — of course I'm jealous!

GILGER: All right, so this time it is all about native Arizona crops. So we went to classic Valley restaurant Phoenix City Grille to try them out.

GILGER: All right, Chris. It is. The June edition of Sonoran Arcana. Middle of summer. But where are we in this nice cool dining room?

CHRIS MALLOY: We are at Phoenix City Grille, and we are about to get into the Ramona Farms superfood salad, which is one of the many great offerings at this old-school classic that highlights some of the amazing bounty of our state.

GILGER: OK, and you did this long feature on Ramona Farms, and and tell us a little bit first about the history here. When I think of them, I think about tepary beans.

MALLOY: Yeah. So Ramona farms was founded in 1974 by Ramona and Terry Button. It's on the Gila River Indian Reservation down southeast of the city. And they started with 10 acres. Over the years they built up to 4,000 acres. And on a fraction of that acreage, they grow some indigenous crops including a tepary bean. Now the tepary bean is a desert-adapted to bean that is native to this area and that almost went extinct over the decades. But Ramona and Terry, shortly after Ramona's father passed, they found a jar of old teparies in a trunk that belonged to her father and they started planting them because her father was all about experimenting with plants and animals. And so they kind of wanted to honor him by planting those beans as they started their farm. And by the end of the '70s, they were certain to grow some serious quantities of tepary beans and selling them around the reservation and even beyond. And now they're one of the amazing local crops that we have here. 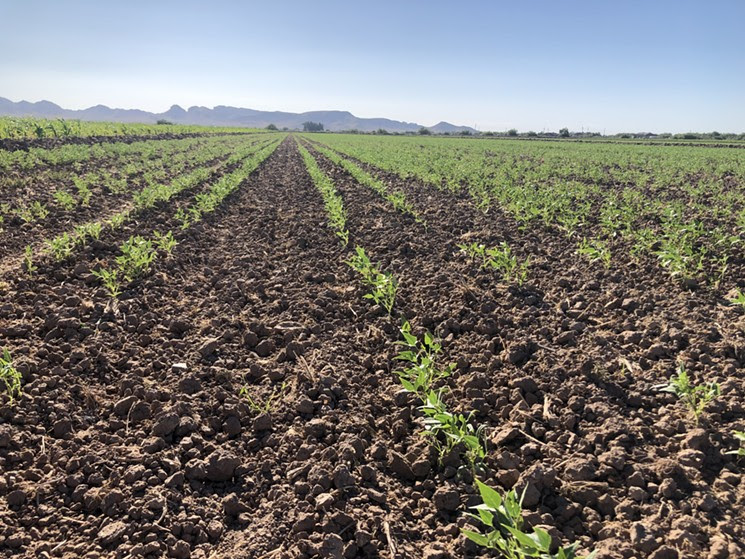 GILGER: And there's an environmental aspect to this too, right? Like this is a desert-adapted crop?

MALLOY: Yeah. So the tepary is unique in that if you if you plant it to align with the monsoon season and the summer rains, it can survive on only one rainfall. It requires almost no rain. And if you look at it out in the fields, like the soil will be all parched and cracked, but the beans will be thriving. It almost loves those conditions. And it has this real rich flavor and a kind of smooth density. You can use it for a lot of different things. As the Southwest gets hotter and drier and the world kind of warms up — as Climate Change ramps up — crops like this could become more and more important. I mean, it doesn't require a whole lot of water. It's hearty. It can fight through a lot, and it taste's great. And it's really nutritious.

GILGER: All right. And we're also here with the chef here at Phoenix City Grill, Micah Wyzlic. I want to ask you, chef, how you learned about this farm. Why have a whole dish on your menu dedicated to it?

MICAH WYZLIC: Well, Phoenix City Grill has been here about 22 years, and we're constantly looking for indigenous ingredients — local ingredients, local farmers — supporting as well as we can. And so it started by us looking specifically for a garbanzo bean and the tepary bean. And we did some research and reached out and contacted Terry, and they said "Oh yeah, give us a few days, and we're out in the field right now. We'll mail you a sample." Well, that night they showed up in their truck with a truck full of samples. And that's basically the story. And so we've been a partner and supported them, you know, since then.

→ Untold Arizona: Arizona-Grown Tepary Beans Preserve The Past, Hold Promise For The Future

MALLOY: They have like a — it's hard to explain — there's like an earthiness, like a robust earthiness to it that you don't get with beans. It's kind of like rustic and refined at the same time. It's very enjoyable, and it reminds you of the land.

WYZLIC: Well, in this salad, we slow poach them, if you will. So they get a nice undertone of flavor and then we just use them in the salad just like that. We've used them very similar to like a hummus, like a white bean puree or a spread. In the summertime when we can get fresh sweet corn, we try and pair it with what we call the three sisters — so the corn, the tepary beans and a local squash. We've also done a puree with it and done similar to a Mexican street corn and used the beans in the puree as a base. So we've used in several different ways.

GILGER: But that's not even the only ingredient, like you mentioned, from Ramona farms in the salad. And Chris, you write about some of the other things that they work on growing there. It's not just tepary beans there are other sort of heritage products they're working on cultivating.

MALLOY: Yeah, so there's four different kinds of corn. Four different colors of corn, too, which is really cool. What Ramona farms does is they roast the corn out in the fields where they pick them by hand. They hand pick the corn, which is pretty incredible. And then they process that corn into this amazing library of different products. I mean, all kinds of grits and polentas. And indigenous ga'ivisa is one of them. Pinole. Yeah.

GILGER: So you write here that you think that that what they're doing on this farm has the capacity to change how we eat here in metro Phoenix. And I wonder why you think that. 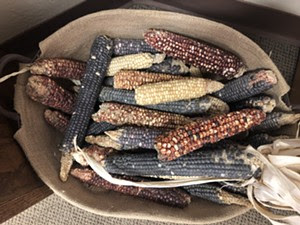 MALLOY: For a few different reasons. Arizona is a really rich agricultural state, and people don't realize that from outside the state. But we can grow a wide variety of things here, and a lot of them come from afar. But I think growing a lot of these crops that are really well suited to the desert is ecologically sound for the long term. But also, you are kind of representing the desert in a beautiful way by growing these desert adapted crops like the tepary beans, the Hopi corn. I think there's that element where you're kind of getting this next-level connectedness with your environment. But then also, these are crops that have the character of our land, and it kind of comes through in the flavors. You get that kind of with the tepary bean — I said that kind of like rustic, rugged earthiness — that is almost mirror to what the Sonoran is like. It has this kind of rustic, rugged character to it, but it's also beautiful. And I think that these foods really reflect that in an interesting way that's a little bit hard to describe. But when you have it, it becomes clear to you. They have a lot of character.

GILGER: Do you agree with that, Micah? Do you think when you use products like this, or when you're trying to support a local farm like this, you can really sort of change the food culture of this place?

WYZLIC: Without a doubt. I think what Ramona farms does is there's a high level of passion involved in this. You know, I mean, that the hours that they put in in the fields. I mean, if you knew the work ethics involved and the love that comes into it. And then bringing it in into our kitchens, you can taste — like you said — you can taste the heritage, you can taste the earthiness, the love. It's really important for people like Ramona and what they do at their farm to continue this process.

GILGER: So you do say, though, only a handful or so of Phoenix chefs are really using these products and doing this. Do you think that that we're at a tipping point, though? Like, you're pursuing in this column this idea — like, what is Arizona food? What is Sonoran food today? Do you think it's shifting?

MALLOY: I hope so. I mean, these are beautiful ingredients, and you can find them on some menus here, but they're not all all over the place. I think as people recognize the just amazingness of the environment we live in — and some of the chefs that are gaining recognition today, they're using Arizona ingredients. They're using Sonoran ingredients. They are really tapped into farms like Ramona Farms. And I think Ramona Farms and places like it could be the catapult that we need here to really be seen as a nationally great food city.

GILGER: Chris, Micah, thank you so much.

WYZLIC: My pleasure. Thank you.