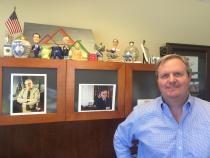 Jude Joffe-Block
Protesters rallied outside of Maricopa County Sheriff’s Office calling for criminal charges against the sheriff on May 25. 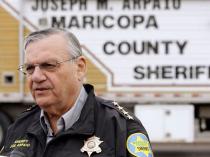 Maricopa County Sheriff Joe Arpaio is due back in court on May 31. A federal judge has set a hearing to decide what remedies to impose after finding Arpaio and three aides in contempt of court.

Snow will hear arguments about what the consequences of his contempt finding should be-- namely how to correct the sheriff’s operations and compensate individuals who were wrongfully detained by deputies in violation of court orders.

Arpaio has a national profile for his hardline stance on illegal immigration. But the contempt finding is the latest example of how the sheriff’s immigration enforcement tactics have caused him trouble in federal court.

The civil contempt case stems from a racial profiling class action lawsuit filed by Latino motorists in 2008. After years of litigation and a trial, Snow ruled in 2013 that the sheriff’s tactics to crack down on illegal immigration violated the civil rights of Latino drivers and passengers. He mandated the sheriff’s office undertake a long list of reforms, including body cameras for deputies, new training and an independent monitor to ensure compliance.

Snow also issued a pre-trial ruling in 2011 that Arpaio’s deputies did not have the authority to make immigration-related arrests. He barred the sheriff’s office from detaining suspected unauthorized immigrants who could not be charged with other crimes.

But years later it became apparent that the sheriff’s office had ignored that 2011 order for 17 months, and continued detaining immigrants and turning them over to federal authorities for deportation.

Snow initiated civil contempt of court proceedings against the sheriff last year for failing to follow that 2011 order, as well as other violations, including withholding video evidence.

Cecillia Wang of the American Civil Liberties Union is one of the lawyers representing Latino drivers in the suit against the sheriff’s office. Wang said at a minimum, hundreds of Latino drivers were impacted by the violation of the 2011 court order.

“Latino residents of Maricopa County, despite having a federal court order that was meant to protect them and their constitutional rights, were still vulnerable to Arpaio’s politically motivated efforts to go after people that he suspected of being undocumented immigrants,” Wang said.

Arpaio responded by admitting he had violated court orders, though he and his lawyers argued the violations were accidental.

“Were there mistakes made? Absolutely. Were court orders violated? Absolutely,” Arpaio’s lawyer John Masterson told reporters last fall. “But the key [point] we wanted to get across to the court, and the public for that matter, is it was not intentional.”

But in the 162-page ruling Judge Snow issued on May 13, he found Arpaio’s violations were intentional. In fact, the judge concluded Arpaio purposefully ignored the 2011 order so he could maintain his record on immigration enforcement during his 2012 reelection campaign.

Arpaio’s attorneys sent a memorandum to the judge Friday saying the sheriff and his aides were “devastated” to read the court’s contempt finding.

“They desire to do everything in their power to restore the Court’s and community’s confidence in them and the Maricopa County Sheriffs’ Office,” the court filing reads.

So far, the sheriff and his chief deputy have volunteered to personally donate $100,000 to a Latino civil rights organization and publicly acknowledge their violations. The sheriff expressed he is willing to cede some oversight authority over certain officer misconduct incidents to an independent entity.

All the parties have been working together on a proposed program to compensate individuals who can prove they were unlawfully detained by sheriff’s deputies during the 17-month period in which the 2011 order was not in effect. But questions remain over how such a program will be funded.

While the sheriff's lawyers say the county should fund the compensation program, lawyers representing Maricopa County's interests are arguing the county should not be liable. County taxpayers have already spent $40 million on costs related to this racial profiling litigation, which has gone on now for eight years.

Wang of the ACLU and her team are asking the judge to make Arpaio personally pay $300,000 toward the compensation program.

Wang also wants the judge to ask the U.S. Attorney’s office to investigate Arpaio and his chief deputy for criminal contempt, and possibly other federal charges — including perjury and obstruction of justice.

Paul Charlton, a former U.S. Attorney for Arizona, said the strong language in the judge’s contempt ruling indicates the judge is already seriously considering a criminal referral. The order uses words like “intentional,” “deliberate,” and “sleight of hand” to describe violations by the sheriff and others.

“Those are words which signal very clearly that there is a very high likelihood there is a criminal prosecution in Joe Arpaio’s future,” Charlton said.

At a rally outside of the sheriff’s office last week, a few dozen protesters chanted and held colorful signs calling for Arpaio to face criminal charges.

“We believe the only punishment for Arpaio is for him to taste the same thing he did to everybody else,” said protester Salvador Reza, referring to imprisonment.

But Arpaio has different plans. The 83-year-old has been stumping for Republican presidential hopeful Donald Trump and is running for his seventh term as sheriff.

Arpaio’s campaign manager Chad Willems said the sheriff is enjoying a groundswell of support so far this campaign season.

“He does what he says he is going to do and he is never afraid to go into a fight,” Willems said. “He never has taken an easy way out of anything and I think people respect that.”

As of the last official report at the end of January, Arpaio had already raised nearly $8 million for his reelection.