Scottsdale Police Cite Pay Problems As Cause Of High Turnover 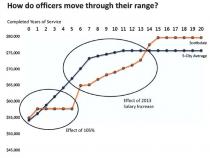 (Courtesy of the Scottsdale City Manager's Office)
Graph showing how Scottsdale police officers are going to other law enforcement agencies.

(Courtesy of Scottsdale City Manager's Office)
Other Valley police departments have extra pay opportunities in addition to base salary.

(Courtesy of the Scottsdale City Manager's Office)
Bar graph shows the pay discrepancy between what Scottsdale officers are making compared to their counterparts at other Valley police agencies.

Officers are leaving the Scottsdale Police Department at a rate more than double that of other Valley police agencies. Officers have asked the Scottsdale City Council for a boost in pay to help address the retention issue.

Anderson said he left early because the city wasn’t giving him enough in pay and benefits. He got a second job in the private sector, and then later retired from the police department.

He isn’t the only one. In the last fiscal year 7.3 percent of sworn officers retired or voluntarily left the Scottsdale force. Anderson said the problems are not from within the police department itself, but with the how the city values its officers.

“It’s a very good police department. Good, hard working police officers. It’s a very professional department,” Anderson said. “But the ability to progress through your pay ranges has been the largest hamper to morale.”

Many cities pay police through a salary step program. But Scottsdale doesn’t. Each year the city council decides if and how much of a pay increase officers get. In the past six years the council hasn’t continued the steady annual increases, and officers even took a 2 percent pay cut in 2009.

Anderson said it takes a toll on officers.

“The day to day grind of the job, plus the concerns of pay and benefits do wear down on the employees,” he said. Some officers became frustrated and went to other Valley police agencies.

Ryan McKinnon is the president of the Scottsdale Fraternal Order of Police.

“Some of our ranges are paid less than other departments, so they are able to go to another department and make more money while still living in the same house, same churches, same schools, same friends and family everything else,” McKinnon said.

Some of the 10 police officers who have left in the past year for other Valley agencies told us they make between $10,000 and $17,000 more per year doing the same job at another department.

This is an issue the Scottsdale Fraternal Order of Police has been trying to address for several years. The difference this time is city staff collaborated with officers to create a report demonstrating the discrepancies in pay.

The report was presented to the city council last week. The seven councilmembers disagree with how to proceed.

Councilman Guy Phillips voiced his support for a full fix to bring the department up to par with the rest of the Valley agencies.

“Police compensation comes before our council every year, and basically our fix is whatever money is left over at the end of the budget let’s throw at it, and that never fixes the problem,” Phillips said.

Phillips supports creating a financial policy so officers can have certainty. Others aren’t sure these changes are necessary.

Councilman David Smith said, “Let’s leave out the other cities. Let’s be Scottsdale. Let’s not copy other communities and do our own thing and let’s figure out what’s right.”

Mayor Jim Lane is concerned what pay increases would do to the budget. He argued money isn’t the only factor for officers.

“Frankly, we have a great environment to work in and a great community,” Lane said. “Now I don’t know that you can measure that in dollars and cents.”

Retired officer Anderson said he used to agree, but doesn't any more.

“I think the city likes to fall back on we’re better because we are Scottsdale and that may not ring quite as true as it has in the past," he said.

The department has a higher starting and ending base salary than other Valley departments — the problem is with the officers in the middle. Those with up to eight years in Scottsdale are still making close to starting pay.

Phoenix, Chandler and Glendale have compensation in addition to base salary such as specialty assignment and longevity pay. This increases an officer’s total income.

The Scottsdale City Council can raise current salaries to make them competitive, create a salary step program, or do both. Officers believe that doing both would resolve the issue in the long term.

The city manager’s office will crunch the numbers for the budget discussion, which starts in the spring.