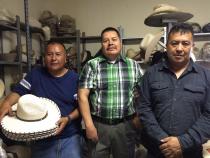 CIUDAD JUAREZ, Mexico — It was 3 a.m. when police broke through the front gate of Alberto Chavira’s home in June 2013. Their loud shouts shook Chavira out of bed. When he went to the door, he saw heavily armed men wearing ski masks.

"They said they'd gotten a complaint about us holding kidnap victims," Chavira said. "They told me, 'We're state police and we can come in the good way or the bad way'."

Scared and confused, Chavira said his family had nothing to hide and let them in. But instead of searching the house, they gave him an order.

"They told me, ‘Bring out everyone in the house,' even my dad who was very weak," he said. "When I brought him out they told him, 'You're under arrest' and took him away."

His father, Victor Chavira, was 79 years old. Half blind and debilitated by diabetes, he was under a doctor's orders to follow a strict diet and a daily regime of medications.

Alberto Chavira claims police never showed them an arrest warrant nor did they inform his father of his rights or told him why he was being arrested — all requirements under Mexico's new system of justice, which is supposed to provide greater protections for people accused of a crime.

The new system, which was approved by congress in 2008 and scheduled for full implementation this June, replaces Mexico's formerly closed system of mostly written proceedings to one that opens up trials to the public and requires oral arguments before a judge. It grants suspects the presumption of innocence and places the burden of proof on police and the prosecution.

But Mexico's transition into the new system hasn't been smooth, and it's clear it will take time to break some bad habits, particularly when it comes to high stakes cases. In the northern border state of Chihuahua, which adopted judicial reform early on, police were the last to be trained in the new system.

Alberto Chavira tried in vain to get answers from authorities in the frantic hours following his dad’s arrest. He didn’t find out what happened until he saw the next day’s news.

Chihuahua's attorney general announced at a press conference that police had captured a sex trafficking ring. Among the six men he paraded in a line up before reporters was Victor Chavira. The men were being accused in the abduction and murder of 11 young women whose bones had been found two years earlier scattered in the desert outskirts of Ciudad Juárez.

Victor Chavira was eldest of ten siblings and the only one who resolved to stay in Mexico and raise his family. The others moved to the U.S. where they’re now citizens. The elder Chavira began as a shoe salesman, then saved up money to start his own cowboy hat factory and later opened several stores in Juárez, which are now run by his children.

“He loved Mexico,” said daughter Sylvia Chavira. “He worked hard and gave us a good life.”

In 2010, a teenage girl walked into one of the family’s downtown stores looking for work. A day later, her parents reported her missing.

The girl, Jessica Leticia Peña Garcia, was a pretty 15-year-old who loved to swim and eat pizza. A surveillance video given to police by the Chavira family shows Jessica walking into their store to drop off a job application. A few minutes later, she walks out.

This video was the main evidence prosecutors used against Victor Chavira at a court hearing two days after his arrest. The prosecution didn’t show the part of the video where Jessica leaves the store.

There was also testimony from the government’s star witness, a teen gangster who claimed his turf was downtown Juárez. He told the court that Victor Chavira was handing over girls to a local gang to avoid paying them an extortion fee on his business.

This baffled Alberto Chavira, who also testified at the hearing. He said his family had been paying extortion since 2009 and that police knew about it. In fact, his family cooperated with an undercover investigation that led to the arrest of two extortioners inside their store.

Written declarations obtained by Fronteras Desk show inconsistencies in the teen gangster’s testimony, whose identity was concealed in court. Two of his declarations aren’t signed by a defense attorney. In one version he accuses Jessica’s aunt, who he claims sold cigarettes downtown, of putting her niece in the hands of gangsters who kidnapped her. One of the kidnappers he named was later proven to be in jail at the time of Jessica’s disappearance.

"In the end, none of that mattered, the judge decided to keep my dad in jail," Alberto Chavira said.

Six months later, before his case went to trial, Victor Chavira died. His diabetes had worsened in prison. A judge refused the family's tireless requests to grant him house arrest, even under doctors’ recommendations. Their petitions to the state human rights commission went nowhere.

Gustavo de la Rosa Hickerson, a well-known human rights attorney, examined the case against Victor Chavira at the family’s request. He found it to be embarrassingly weak.

"When there's no investigation that points to the true killers of these women, it only perpetuates impunity," he said. "That's not justice. That's an injustice."

Prosecutors declined to comment on this case. Last July, two years after the original arrests, a panel of three judges sentenced five men to life in prison for the murder of the 11 girls. The case is now on appeal.

Meanwhile, Jessica's father, Jesus Peña, says he still feels clueless about exactly what happened to his daughter from the moment she went missing to the day when he received her bone fragments.

"Has there been any justice? No, because women like my daughter continue to disappear," he said.

Two years after his death, Victor Chavira’s grandchildren still fill his home with kisses and laughter. His family is distraught over his death. His son Alberto says they'll keep fighting to clear his father's name.

“He gave us so much love,” he said. “And we couldn't be there to say goodbye.”

Part 1: Mexico Is On The Brink Of Transforming Its Justice System