Long Before Flint, Part II: No Running Water, No Transplant

Long Before Flint, Part II: No Running Water, No Transplant 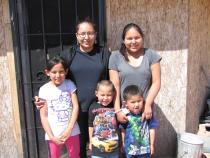 (Photo by Laurel Morales-KJZZ)
LaTanya Dickson and four of her children Laurice, Carla, Jason and Elijah, stand in front of their hogan on the Navajo Nation. They need running water to bring their sister, Lisa, home from Phoenix. 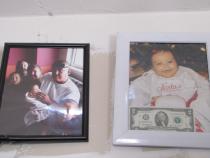 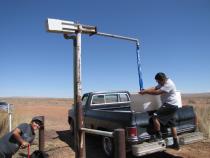 Laurel Morales
Sterling and Brennan Begay fill up their water barrels for their livestock. They say this water isn't clean enough for humans to drink. On the Navajo Nation 40 percent lack running water. 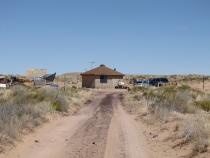 LaTanya Dickson, her husband and four children live in a 24-by-24, one-room hogan on the Navajo Nation. The home is cozy for six. But there’s still someone missing.

Dickson pulls up a video on her phone of her daughter Lisa, now 18 months, playing with a nurse in Phoenix. This is the closest Dickson has been to her daughter in many days.

“We missed everything-- her first laugh, her first Christmas, her first crawl,” Dickson said.

The family tries to see her once or twice a month. But when they go, Lisa doesn’t recognize them right away.

“We would go to try to touch her hand or try to talk to her and she’ll just look at us and look at one of the nurses that are on duty and start to cry,” Dickson said.

Baby Lisa was born a year and a half ago with microvillus inclusion disease, a rare digestive disorder. She needs a small intestine transplant but the doctors explained Lisa wouldn’t survive the surgery without running water to keep her clean at all times. Her family and many families on the Navajo Nation have to haul their water from many miles away.

“For them to tell you that your daughter has to stay here, she can’t go home, because you don’t have the basic necessities to take care of her, that’s really heartbreaking to me,”
Dickson said.

Dickson and her neighbors drive to a water station about 10 miles away to fill up their plastic barrels. Dickson’s neighbor says this water is only for crops and livestock because it’s not clean. They drive twice the distance and pay 35 cents a gallon for clean drinking water.

A long legacy of uranium mining has made clean groundwater difficult to reach on the Navajo Nation. Between 1944 and 1986, mining companies extracted nearly 4 million tons of uranium from Navajo land. The federal government purchased the ore to make atomic weapons. When the demand was gone, the companies left, abandoning more than 500 mines. The EPA only recently began to clean up the contamination.

“Many people don’t know that and many people don’t realize the debt we owe the Navajo Nation,” said EPA regional administrator Jared Blumenfeld. “A lot of people have spent years suffering really some pretty terrible conditions.”

Lack of access to clean drinking water is just one example.

Dickson went to the Navajo Office of Environmental Health to find out how soon they could get clean water. Even though the medical condition is serious, officials tell Dickson it would take two to three years before they would survey the area. And another couple years before the tribe could fund and build the line.

So Dickson and her husband tried to raise money on their own by raffling off gift cards, jewelry and donated artwork. A friend brought attention to baby Lisa on an Albuquerque TV station. And that’s how the nonprofit DIGDEEP got involved.

His organization is digging wells in many impoverished areas, including the Navajo Nation, where 40-percent of the people lack access to running water.

“There are about a million children in the U.S. right now that still don’t have safe, clean running water at home,” McGraw said. “There’s a big concentration of those children in the southwest and on the Navajo Nation. If you don’t have running water and sanitation at home it’s really not only impossible to live a ‘normal’ life socially, but it’s also really difficult to just live a healthy life.”

DIGDEEP is raising $50,000 to build the water line, and install a bathroom, kitchen sink and septic system, so LaTanya Dickson’s family can be complete, living under one roof.