Download mp3 (5.47 MB)
Christina Estes/KJZZ
Unlike the newer North and West Halls which have ground level entrances, visitors to the South Hall must use stairs or a ramp to reach the entrance.

When Phoenix leaders adopted a master plan for the convention center in 2002, it included three expansion phases. The first two were completed more than a decade ago while the final phase has been in limbo. But that could soon change.

For years, the South Hall — also called the South Building — served as home base for the Salvation Army to serve thousands of Christmas dinners. It’s where Rock 'n' Roll Marathon runners and volunteers gather before race day and where crowds check out wedding vendors at the annual Arizona Bridal Expo.

Nearly 90 events — most of them local — keep the South Building busy more than 200 days a  year.Convention Center Director John Chan told the Economic Development Subcommittee it costs about $1 million a year to operate the South Hall and it generates $2 million in direct revenue.

“From rental fees and commissions that are made from catering, audio visual and IT services provided," he said.

After approving the convention center’s $600 million expansion plan, Phoenix built a West Hall in 2006 and a North Hall in 2008. Those buildings are where most of the national conventions and big trade shows take place. The final phase was supposed to link the North and South Halls under Washington Street. But Chan said light rail would complicate it while a permanent underground shoring wall would prevent it.

The South Building covers more than 9 acres from Washington to Jefferson and Third Street to Fifth Street — it’s right across from Chase Field and a block away from Talking Stick Resort Arena. Discussions about the building’s future were pushed to the back burner as the city and the Phoenix Suns spent years behind closed doors haggling over the arena’s future. Then, when a deal between the city and Suns was reached late last year, council members realized they forgot to include the public. 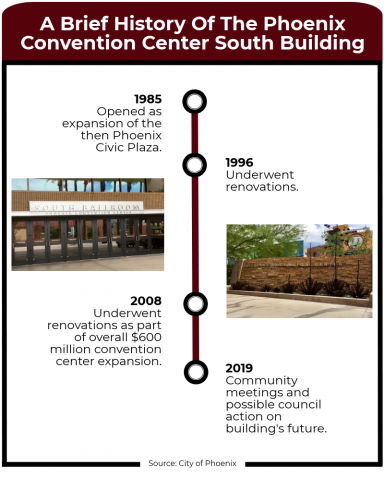 Planning and Economic Development Subcommittee Chairwoman Laura Pastor said she was asked by the mayor to put the item on her agenda and she used the May meeting pushed staff to create an outreach plan.

“What I am saying is there needs to be a pure process where community is clearly engaged in order to determine what downtown looks like," Pastor said.

Meetings are expected to start later this month. This fall, the council will receive options based on market research and community input. They could include connecting the South Building to the North using an overhead pedestrian bridge, exploring a public-private partnership and selling the site to private developers.