As the Phoenix Police Department speeds up deployment of body-worn cameras for patrol officers and patrol sergeants, we’re learning more about how they work — and what’s not yet working.

His instructions on how to turn on the camera seemed to contradict earlier expectations laid out by Chief Jeri Williams. In January, she told the public safety subcommittee cameras would increase trust, increase officer safety and eliminate human error by having to turn on and off cameras as dictated. 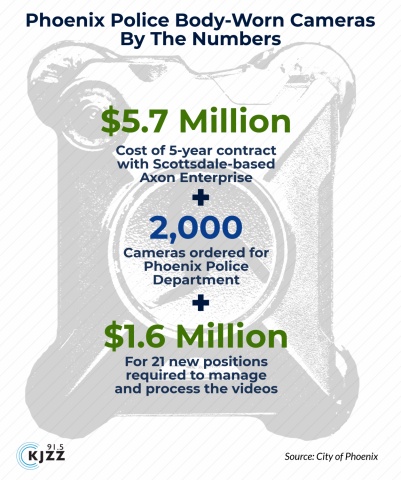 “The automatic activation features we had mentioned were the officer opening his or her car door and/or if they turn on the lights and siren on the car, it would automatically activate,” she said. “But, again, you have that component in there that if they’re going to the restroom or having lunch or doing other things, they can turn it off, but they’re required by policy to turn it on in situations where we’re engaging with the public.”

“So, it’s not the officer turning it on or off. It’s automatically?” asked Councilman and Subcommittee Chair Michael Nowakowski.

Nowakowski then asked if officers had to submit a written explanation for turning off cameras. Williams said they have to document it — either written and/or tell their supervisor.

“We’ve made adjustments to policy, meaning that if an officer doesn’t have a body-worn camera activated when it’s supposed to be, that that is an automatic reprimand which stays in an officer’s file for three years,” she said.

Besides personal breaks, she said officers can turn off cameras in clear instances as long as it is justified in written documentation and the supervisor is informed.

“If they’re having privileged conversation perhaps with a member of the public who wants to remain anonymous and wants to report a crime and/or a victim of sexual assault, a child,” she said.

Department spokesperson, Sgt. Tommy Thompson, said automatic activation is a feature they have not yet used in the three precincts where more than 600 cameras have been assigned as of June 16, 2019.

“The automatic turn on point that’s one thing that we’ll go with down range, but before we go down there we want to make sure people understand, ‘Hey, I’ve got to turn it on. I’m responsible for this camera, not some automatic switch.’” he said. “And that’s part of the training we want to have.”

"We’ve made adjustments to policy, meaning that if an officer doesn’t have a body-worn camera activated when it’s supposed to be, that that is an automatic reprimand which stays in an officer’s file for three years."
— Chief Jeri Williams, Phoenix Police Department

“What the camera technology has shown locally and nationally is there’s a civilizing effect when people know they are being filmed by the officer wearing the camera and by the people they are filming,” Mike Kurtenbach, executive assistant chief told the public safety subcommittee last January.

By mid-August, Phoenix expects to have 1,200 cameras deployed across all seven precincts. Full deployment had been planned by the end of this year, but a bystander’s video showing Phoenix officers cursing and pointing guns at a family suspected of shoplifting ignited outrage and led Mayor Kate Gallego to order all cameras be assigned by August.

Christina Estes/KJZZ
The South Mountain Precinct is the third precinct to receive body-worn cameras.
The Show