Wearing a shirt that read "End police brutality," a newcomer to the Phoenix City Council asked for his colleagues’ support to increase transparency.

For the second straight night, Phoenix leaders heard from residents demanding action against some police officers. A bystander's cellphone video shows police cursing and pointing guns at a family with young children while responding to a shoplifting call. The video shows an officer sweep-kicking Dravon Ames' legs apart, nearly causing the handcuffed man to fall down. Ames, who has filed a $10 million claim against the city with his fiancee Iesha Harper, addressed the council during Wednesday’s meeting. 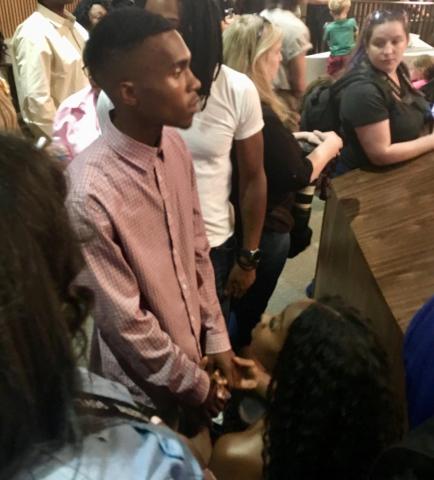 "It's sad that them officers are still working, and we want them fired, and we demand that they be fired," he said.

About 15 minutes into public comment, after hearing officers labeled as murderers and terrorists, Councilman Sal DiCiccio had had enough.

"I gotta push back on some of these negative comments because the media’s here. I want the media to know that not everybody in this city believes this crap because that’s what this is. It is all wrong," he said before being drowned out by boos from the audience. "No, you’re all wrong. We can disagree. So this is what happens."

After nearly four hours of public comment, Councilmember Carlos Garcia, who campaigned on increasing police accountability and transparency, asked the council to create an ad hoc committee to ensure previous community recommendations are implemented, along with a civilian review board with the power to subpoena police officers. Mayor Kate Gallego committed to convening the council to address reforms but no date was provided.

During the meeting, several residents called on the officers involved to be fired. While discussing the legal process, Gallego explained how state law impacts the city.

The council voted to approve a citywide budget, which includes $721 million for the police department. Meanwhile, some Phoenix police officers want their union to organize a vote of 'no confidence' against Chief Jeri Williams.

Britt London, president of the Phoenix Law Enforcement Association (PLEA), said while they are listening to members, they consider a vote of no confidence an extremely serious matter and want to focus on the investigation before talking about such a vote. He also said the PLEA board will meet to discuss the council’s actions before issuing a statement. 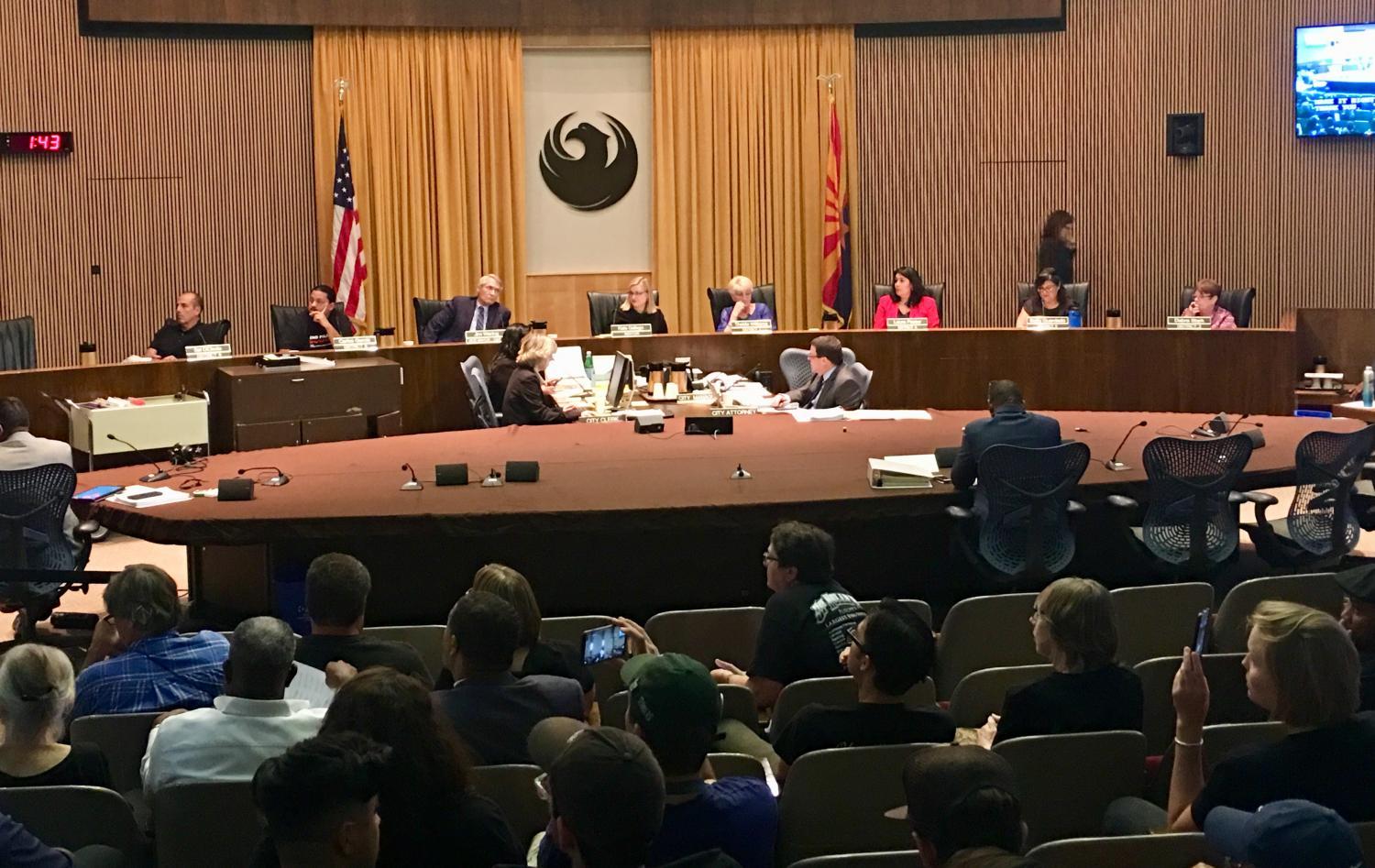 Christina Estes/ KJZZ
The Phoenix City Council approved a budget which included $721 million for the Police Department on June 19, 2019.

The following is a statement released by PLEA President Britt London on June 20, 2019:

"In the past week, the men and women of PLEA have received hundreds of emails, calls, texts and messages of support from residents across the City of Phoenix. We want to acknowledge this outpouring of support during such a heated moment in time, and we want to thank those of you who have continued to withhold judgement regarding the May 27 incident until the investigation is complete and all the facts have been made public.

"At a time when some in our community want to use this incident to stoke their own agenda, your continued support of the men and women on the frontlines means the world to us." 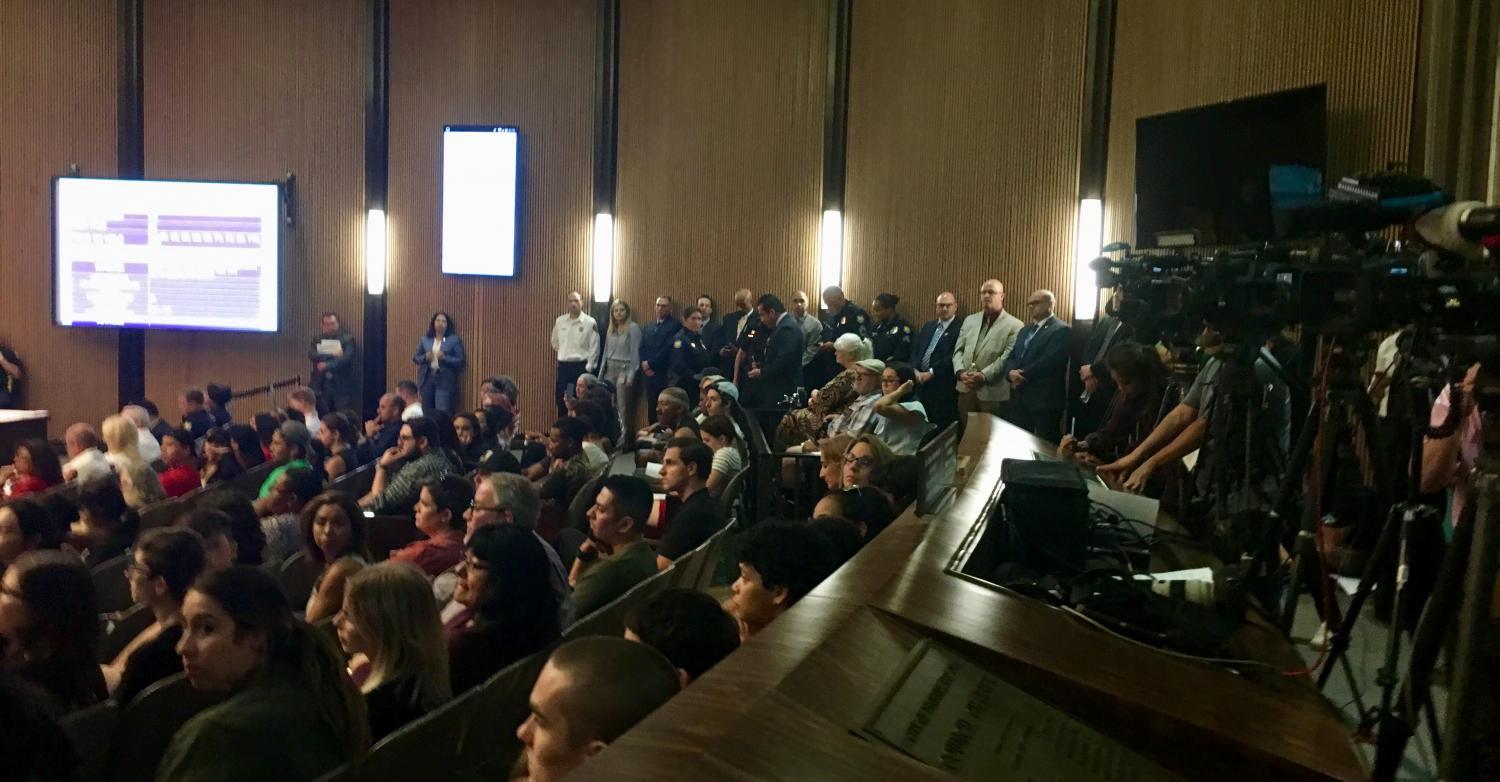 The following is a statement released by Councilmember Carlos Garcia on June 19, 2019:

"For years the Phoenix Police Department has been functioning with impunity. We hope that today's commitment from Mayor Gallego and members of the Phoenix City Council to create a civilian review board with subpoena power, and an ad-hoc committee to ensure implementation of previous community recommendations will be the beginning of real change in the Police Department. We are thankful for all the community members and impacted families who testified yesterday and today and all the tireless organizers and activists who have been engaging in this work for years. It is going to take the same commitment to assure that we stop our current crisis. Our office commits to seeing this through and involving community. We encourage Phoenix residents to reach out to our office with any questions, suggestions or ideas."

The following is a statement released by Councilwoman Laura Pastor on June 19, 2019:

"I was prepared to vote 'no' on the budget today. I could not have in good faith voted to pass the budget after hearing the stories we've heard over the pass few days. They are disappointing and they are sad. Our city is hurting — and we have to do something about it.

"If it took delaying a budget so that we could properly address these issues, I was prepared to do so. Given Mayor Gallego's commitment to Councilmember Garcia and myself to direct the city manager to begin the process of enacting the civilian review body and an oversight ad hoc committee — I voted 'yes.'"