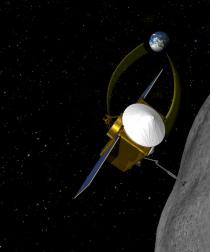 NASA/GSFC/The University of Arizona
Scientists hope the OSIRIS-REx spacecraft can grab at least 60 grams — about 2 ounces — of material from the asteroid Bennu.

NASA's OSIRIS-REx mission once held the record for the closest orbit of a planetary body by a spacecraft. Now, that record has been broken — by OSIRIS-REx.

Led by the University of Arizona, OSIRIS-REx is a seven-year NASA mission to study the carbon-rich asteroid Bennu and return a sample of its surface to Earth in 2023.

The craft has cut its former record orbital altitude of 0.8 miles in half to just over 0.4 miles.

From this new orbit, the ship will more closely observe particles escaping the asteroid's surface and gather data to help scientists back home evaluate possible sample sites for safety and scientific interest.

Such observations are especially important in light of Bennu's unexpectedly rocky surface.