Arizona Charity Rescues Perishable Food, Delivers It To The Hungry

STEVE GOLDSTEIN: Mark, clearly as a man of letters, you've heard the phrase "waste not, want not."

MARK BRODIE: Indeed. My mom would tell me that growing up whenever I didn't eat the Brussels sprouts that she had made. I don't know why she made them. I don't think she likes them either.

GOLDSTEIN: Yeah, that's that's an odd thing with moms. Anyway, it's about not wasting food, and it turns out there's an organization that goes by that name right here in Phoenix that does the same thing on a much larger scale. Waste Not does what seems obvious. They take the food the restaurants and grocery stores are going to throw away, and they give it to the hungry.

GOLDSTEIN: It is, and Phoenix New Times food editor Lauren Cusimano tells us about them in the latest edition of her series "Table Scraps," which focuses on the growing problem of food waste and what some people here in town are doing right. She sat down to talk more about it with our co-host, Lauren Gilger. 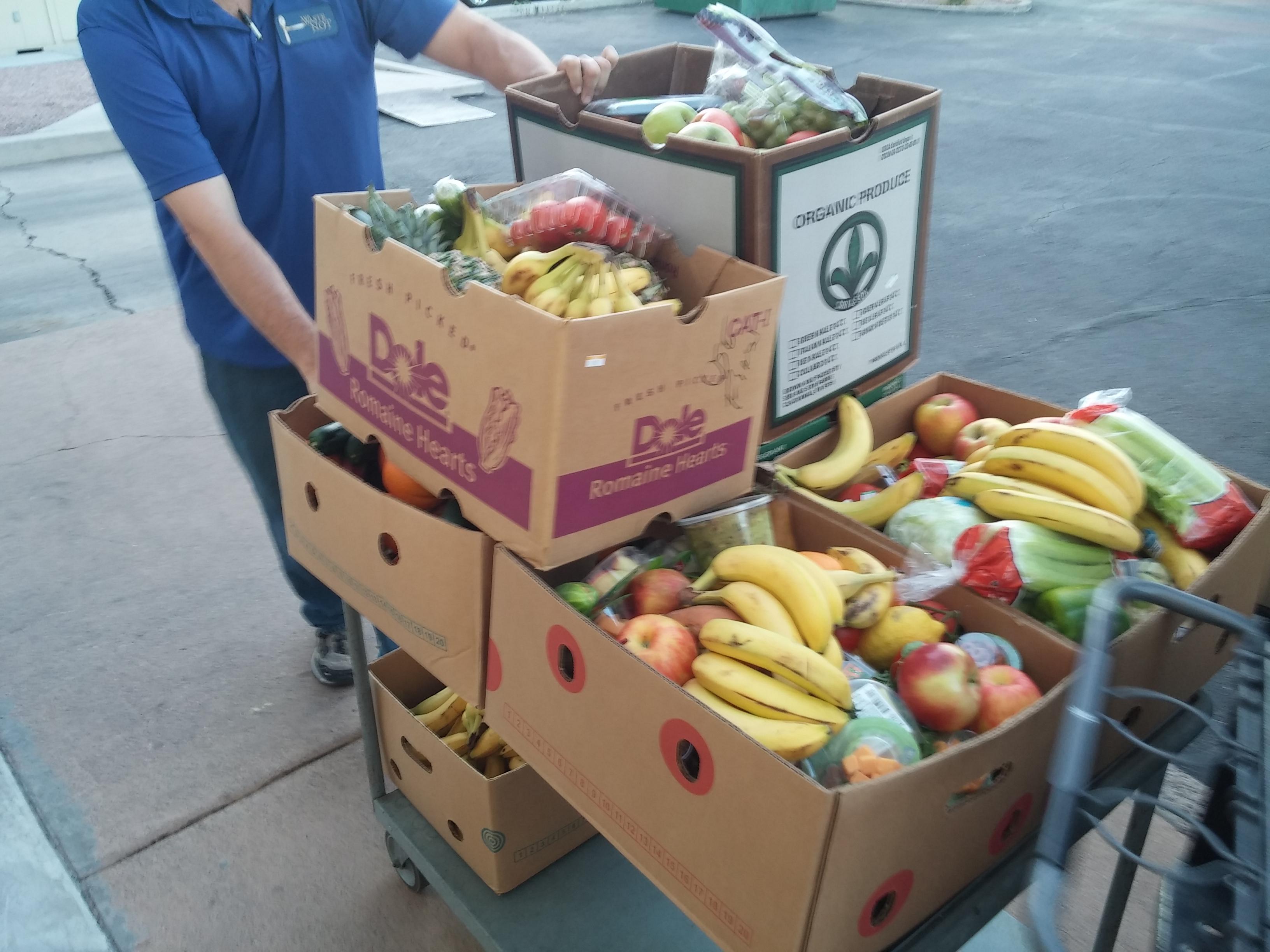 Andrew Bernier/KJZZ
One of the shopping carts full of produce picked up by food recovery service Waste Not.

LAUREN GILGER: OK, so let's start with the problem that you're tackling here, this issue of food waste. You say this isn't a guilt trip in this column. But how big of a problem is this?

LAUREN CUSIMANO: So the stat that I came across that was the most terrifying was that we throw away over 40 percent of our food in the United States. And the reason that's an issue is not necessarily because of the wasted food — although that's horrible; it has its own issues because of the methane emissions that it causes in landfills, which leads to a whole slew of climate issues. So, when I started as food editor at the beginning of the year I was trying to think of how I could do my part in some way, and I wasn't going to do that covering an entirely new restaurant openings and chef profiles, even though those stories need to be told. It kind of dawned on me that I wanted to write a small piece about composting because I personally wanted to learn how to do it, which led me to running that afternoon to the compost facility at Twenty Seventh Avenue, to interviewing people on the spot, to buying a sawed-in-half recycle bin for my own compost and shoving it in the back of my Ford Focus. So that's kind of how this began. And it was my way of trying to highlight this issue within my realm as a food editor.

GILGER: Yeah. Yeah. And it is something it sounds like the food community — restaurants and chefs included — are aware of. And and that's what you're kind of tracking here, like what the city's during. But also, you know, what efforts are out there from other organizations and from restaurants themselves. Give us a couple of examples of some of the things that you've found so far here.

CUSIMANO: So yeah, it's all from just personal bad habits that I had a feeling were, you know, not helping. I was the bad roommate who would throw away everybody's food because the expiration date had past. Expiration dates are baloney, more or less, I learned. I've learned that fantastic organizations like Local First Arizona are doing sustainable food packaging expos, so that restaurants and small businesses can come to their event and pick out some compostable or recyclable stuff for their personal restaurant or business. And recently, idling. If you're idling in a drive thru, apparently that's no good. That's really not helping with ozone layers, especially during the summer. So I was able to loosely tie that in but tie that in all the same.

GILGER: And this most recent article is about some something that seems really obvious, right? Like this idea that restaurants and grocery stores should give away all of the food that they can't sell anymore. That actually is happening.

CUSIMANO: Mm hmm. So this organization has been around for as long as I've been alive. It started in 1987, and it's still such a small team it amazes me. It's a five-person paid staff team, and they start at 6 a.m. and grab the excess food from like a Trader Joe's or Fry's or a catering company or a restaurant, and then they by the afternoon or trucking it to organizations or agencies that help feed people in need. So, I mean, that's what they do on the daily. They are this amazing organization that operates at full efficiency, or so it seems. And I feel like this is just a no brainer for a lot of people. And a lot of people have that thought, Why don't we just give this excess food to people, you know, to to fight hunger?" And that exists, and it exists here in Phoenix, and they've been around for three decades.

GILGER: So this sounds like it is really simple, but I imagine it's not actually that simple, especially when you get into things like you mentioned there: expiration dates. How does this work? How do they guarantee that the food that they're going to give away is still OK to eat?

CUSIMANO: So they know what to deliver,+ and they know what to hold back. And apparently the produce that they hold back goes to their neighbors next door at St. Vincent de Paul. The example that the executive director gave me was that if they received 20 cases of strawberries from a grocery store and 18 were perfect and two were damaged, or — who knows — too far beyond the expiration date, they would take those two cases of strawberries next door to be composted.

GILGER: So "Waste Not," for real, right? And I love how this organization got started. You said back in 1987, but this was started by, it sounds like, a woman who started doing this for her own family.

CUSIMANO: Right. A woman in need — and it's kind of wild because she's a mystery woman — was behind restaurants collecting excess food to feed her family and herself. And she was finding this wild amount of excess food just behind these restaurants. So she was loading it up in her truck, and after she took care of business on the homefront, started delivering this excess food to agencies to help people in need.

GILGER: So when you talk to people in the food industry here — the ones who are leaving so much food or getting rid of so much food at the end of the day — are they aware that this is a problem? Is it something that they focus on or care about or want to change?

CUSIMANO: I think it's become more apparent, this issue, and at the same time restaurants in particular are needing to be more streamlined. So they're becoming more efficient, and so they know their inventory through and through. They know what doesn't sell or what they could reuse later. I feel like the croutons is always a good example.

CUSIMANO: So I spoke with Christopher Wharton at ASU. He is part of the sustainability program department. He gave me this shocking stat, which is: after the expiration date is upon you, that food may have up to a third of its life left. So it's not as though it's completely gone by the time the expiration date comes. You know, maybe it's just past its prime. A little bit. Not necessarily ready to be tossed into the trash. And I was definitely a maniac about expiration dates. I would dig through the fridge every weekend, which is A) I'm just holding open the fridge door, crouching over, and now I mean you more have to engage your senses.

GILGER: So just smell it.

CUSIMANO: Right. Smell it. Look at it, and I mean like that old Jerry Seinfeld joke like: I've never smelled milk. What's the milk supposed to smell like? But it's definitely like engage your senses. Don't just throw something away because of this date stamped on it. It's really unregulated, and it's a it's not entirely a CYA move, but it kind of is.

CUSIMANO: So just ease off a little bit on the expiration dates.

GILGER: And I should stop hating leftovers apparently.

CUSIMANO: Oh yeah, leftovers are great. That's actually what the next installment is gonna be all about: the doggy bag and the history of the leftover, and you know it's gonna be great.

GILGER: All right. We're looking forward to it. Lauren Cusimano is the food editor with the Phoenix New Times. Lauren, thanks for coming in.

CUSIMANO: Thank you so much.