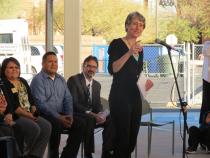 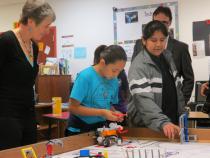 Secretary of the Interior Sally Jewell kicked off the Obama administration’s Native Youth listening tour on Tuesday with a visit to the Salt River Pima-Maricopa Indian Community and the Gila River Reservation. The tour is part of a federal effort to gain a better understanding of some of the challenges facing Native American children.

The secretary said she hopes the effort will help break down some of the administration’s bureaucratic barriers to serving Native communities.

"What the President and first lady experienced at Standing Rock and I have experienced as I’ve had an opportunity to sit down privately with a number of Native youth is that, in many ways, we are failing these children even though we have pretty extensive programs," said Jewell.

During her visit to the Valley, Jewell stopped by two of the tribes’ schools and met with members of local Native youth leadership groups.