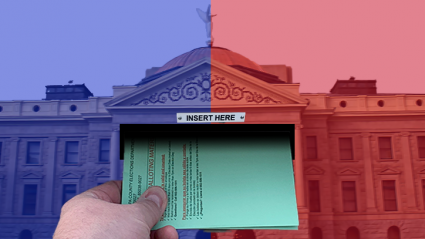 Arizona Republican lawmakers have spent the months after the presidential election introducing bills critics say make voting harder and more complicated. They’ve justified these proposals as a way to restore confidence in the state’s election process. Some of those same lawmakers contributed to that erosion in confidence.
→ More Arizona Politics News
3 hours ago

President Joe Biden is giving an address on plans to withdraw all remaining U.S. troops from Afghanistan by Sept. 11, the 20th anniversary of the terrorist attacks that prompted America's involvement in its longest war.
1 hour ago

More than five months after Joe Biden won the election in Arizona and Maricopa County, the state Senate is preparing to launch its so-called forensic audit of the election.
just now

The Academy Awards will air later this month, and among this year's Best Picture nominees is a film that prominently features Arizona.
1 hour ago

In a few months, the Phoenix metro area should have a comprehensive regional plan to address homelessness.
17 minutes ago

Explore Phoenix's Ancient Canals And Farmland With This App

For many generations before Phoenix became Arizona's capital, it was a very diverse place full of canals and fascinating topography. A Deeper Map app allows users to find out more about where they may be currently standing in metro Phoenix — including what ancient canals and farmland looked like.
1 hour ago

How often do people’s spiritual beliefs affect how they think about money? Quite a bit, according to Harvard University professor Benjamin Friedman in his latest book "Religion and the Rise of Capitalism." The Show spoke talked with him about whether that connection leads us to any link between ideas like free will and free markets.
2 hours ago
More KJZZ News

Empire of Pain author Patrick Radden Keefe says the Sackler family has "thrown a lot of energy" into trying to thwart his reporting about the family's involvement in the opioid crisis.

A Year In, Here's What We Know About Vitamin D For Preventing COVID

For a year, researchers have been studying and arguing over vitamin D's potential for helping protect against or treat COVID-19. The evidence is still not conclusive.

The Trump administration and a liberal activist fought to win millions in federal funds for anti-censorship software tied to the Falun Gong. That saga is now at the center of a criminal investigation.

The top U.S. intelligence officials detailed concerns to the Senate Intelligence Committee on Wednesday, with many questions about cyber threats and espionage targeting U.S. technology.

Biden Announces He Will End America's Longest War In Afghanistan

The president said he will move to withdraw American forces from Afghanistan after nearly 20 years of an active U.S. military presence in the country.
More NPR News